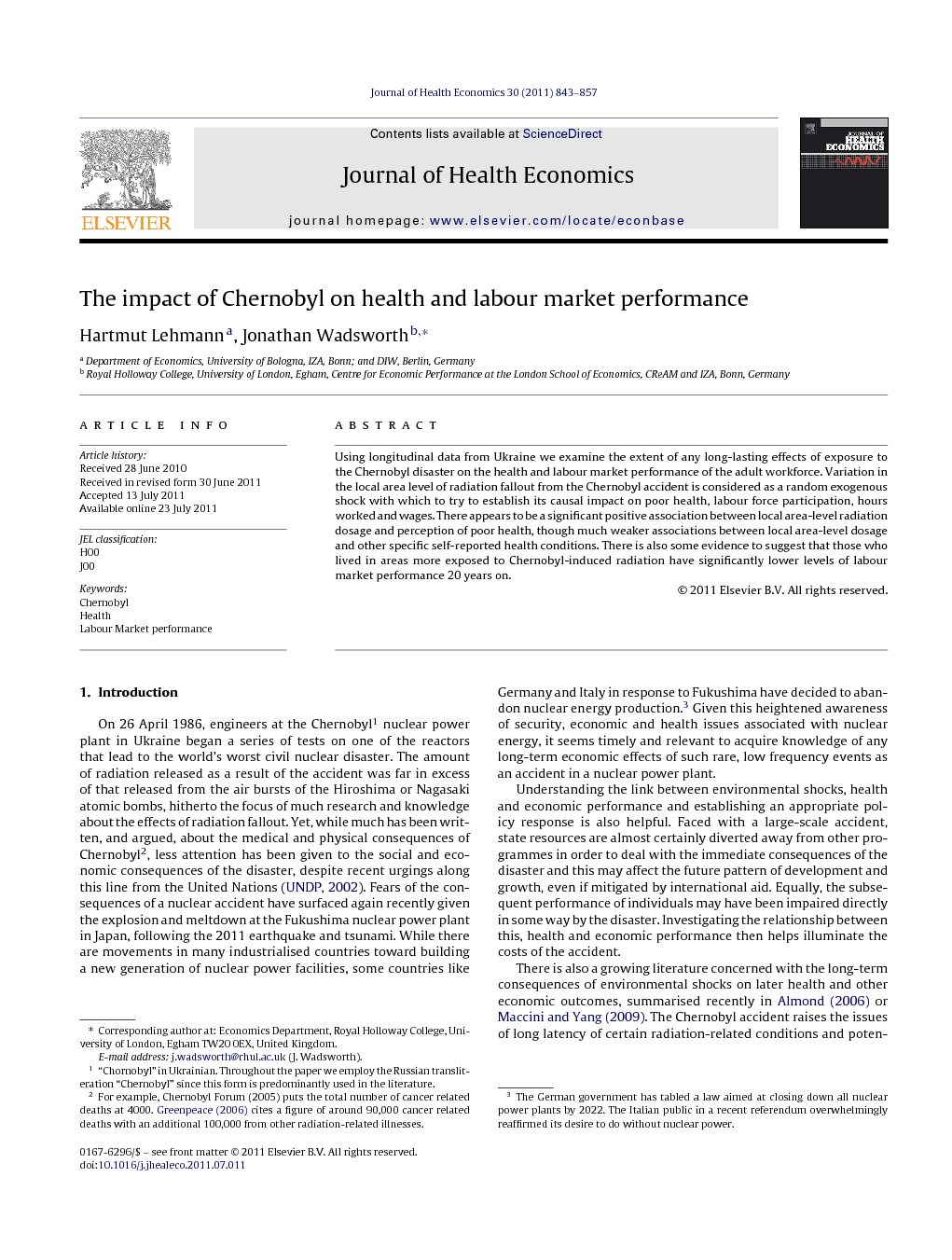 Using longitudinal data from Ukraine we examine the extent of any long-lasting effects of exposure to the Chernobyl disaster on the health and labour market performance of the adult workforce. Variation in the local area level of radiation fallout from the Chernobyl accident is considered as a random exogenous shock with which to try to establish its causal impact on poor health, labour force participation, hours worked and wages. There appears to be a significant positive association between local area-level radiation dosage and perception of poor health, though much weaker associations between local area-level dosage and other specific self-reported health conditions. There is also some evidence to suggest that those who lived in areas more exposed to Chernobyl-induced radiation have significantly lower levels of labour market performance 20 years on.

The evidence presented above suggests that the Chernobyl accident carries a long lasting legacy for many residents of Ukraine, notably because of its effect on the perception of their health. One in six prime-age Ukrainian adults report being in poor health, a much higher figure than comparable estimates from many western industrialised countries. Adults living in areas considered to have received sufficiently high radiation fallout as to be continually monitored, are up to 13 percentage points more likely to report being in poor health. However, there is a less obvious manifestation of such an effect on a variety specific other self-reported health conditions or risky behaviours. While the Chernobyl liquidators, much more exposed to radiation than others, do appear to have experienced more longer term health problems, it seems that the main long-term health effect of Chernobyl for the majority of the current adult population may be working through perceptions. There is also some evidence to suggest that those more exposed to Chernobyl-induced radiation have significantly lower levels of labour market performance twenty years on. If residence in the monitoring zone works only through health perceptions, this could be used to identify the effect of self-reported poor health on the probability of employment, wages or other activities that generate income and/or subsistence for the Ukrainian population. While there is also little evidence from the data used here that residence in a contaminated zone has influenced fertility, marriage behaviour or educational attainment, there is some evidence to suggest that mobility may be reduced among those living in areas that received higher doses of radiation in 1986. As such it may be harder to argue that poor health perception is the sole channel through which Chernobyl manifests itself.