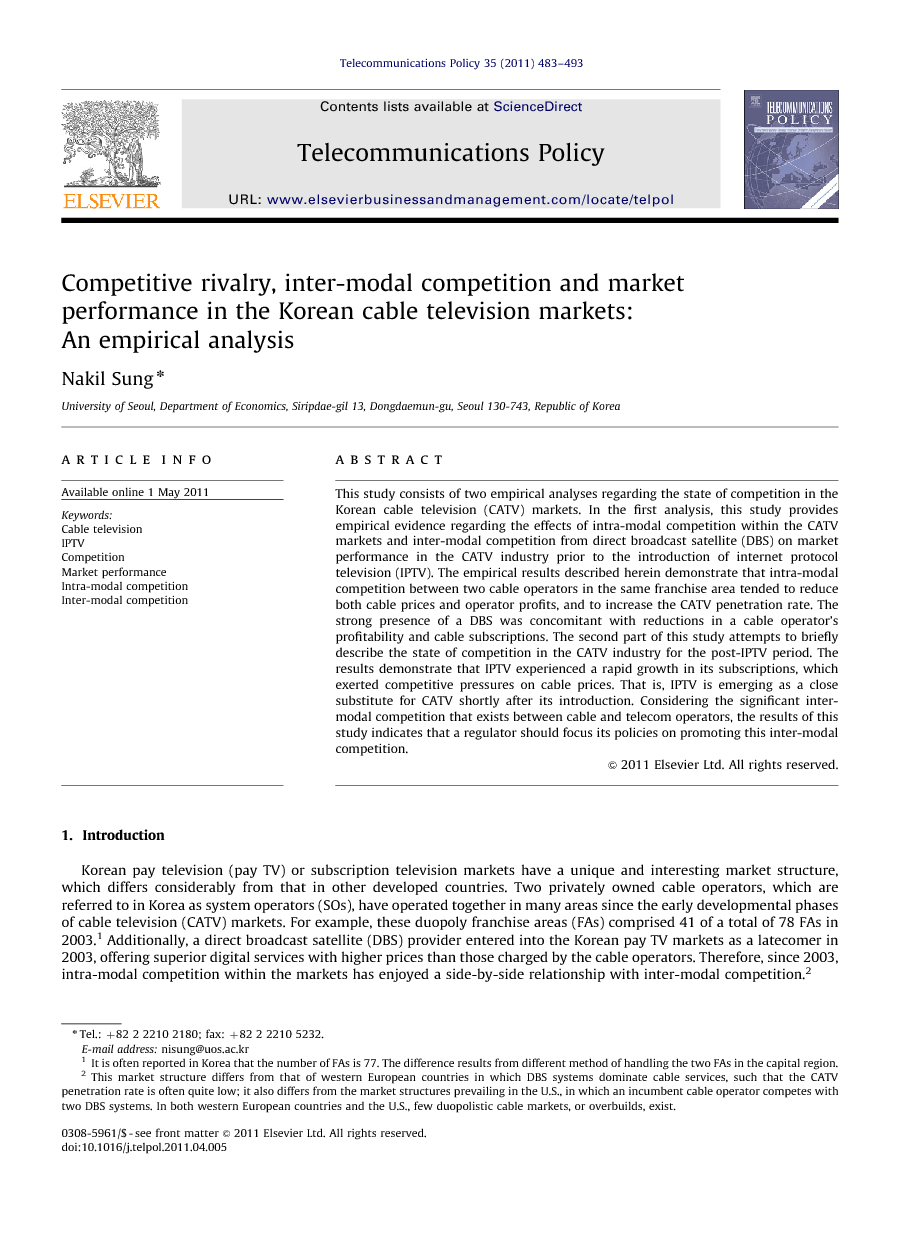 This study consists of two empirical analyses regarding the state of competition in the Korean cable television (CATV) markets. In the first analysis, this study provides empirical evidence regarding the effects of intra-modal competition within the CATV markets and inter-modal competition from direct broadcast satellite (DBS) on market performance in the CATV industry prior to the introduction of internet protocol television (IPTV). The empirical results described herein demonstrate that intra-modal competition between two cable operators in the same franchise area tended to reduce both cable prices and operator profits, and to increase the CATV penetration rate. The strong presence of a DBS was concomitant with reductions in a cable operator's profitability and cable subscriptions. The second part of this study attempts to briefly describe the state of competition in the CATV industry for the post-IPTV period. The results demonstrate that IPTV experienced a rapid growth in its subscriptions, which exerted competitive pressures on cable prices. That is, IPTV is emerging as a close substitute for CATV shortly after its introduction. Considering the significant inter-modal competition that exists between cable and telecom operators, the results of this study indicates that a regulator should focus its policies on promoting this inter-modal competition.

Korean pay television (pay TV) or subscription television markets have a unique and interesting market structure, which differs considerably from that in other developed countries. Two privately owned cable operators, which are referred to in Korea as system operators (SOs), have operated together in many areas since the early developmental phases of cable television (CATV) markets. For example, these duopoly franchise areas (FAs) comprised 41 of a total of 78 FAs in 2003.1 Additionally, a direct broadcast satellite (DBS) provider entered into the Korean pay TV markets as a latecomer in 2003, offering superior digital services with higher prices than those charged by the cable operators. Therefore, since 2003, intra-modal competition within the markets has enjoyed a side-by-side relationship with inter-modal competition.2 Despite a pronounced tendency toward increased vertical integration and horizontal concentration within the markets over the past years, the Korean CATV markets entered into a new phase in which three telecom operators began to provide internet protocol television (IPTV) services. An incumbent wireline operator, KT, went ahead with its commercial rollout in November 2008, and two later comers, SK Broadband and LG Dacom (currently LG U+), did the same in January 2009. As of September 2010, less than two years after the initial service provision, the number of IPTV subscribers soared to approximately 2.9 million. Utilizing experiences from the Korean pay TV markets,3 this study attempts to achieve two objectives. First, this study provides empirical evidence regarding the effects of intra-modal competition within the CATV markets and inter-modal competition from DBS on market performance in the CATV industry. The performance of CATV markets is measured by price levels, number of channels, profit margin ratio, the CATV penetration rate, and the digital subscriber ratio. Second, this study presents a tentative analysis of the state of competition in the Korean CATV markets after the introduction of IPTV. In particular, the study assesses the impact of inter-modal competition from IPTV on the CATV penetration rate and price levels. Empirical analysis was conducted with data from a panel of 119 cable operators for the period 2003–2006 in the first part,4 and based on the post-IPTV period in the second part. Many studies have attempted to characterize the relationship between competition and market performance in CATV markets by employing different empirical models and various datasets. A majority of studies, including those of Mayo and Otsuka (1991), Beil, Dazzio, Ekelund, and Jackson (1993), Emmons and Prager (1997), Karikari, Brown, and Abramowitz (2003), Goolsbee and Petrin (2004), Savage and Wirth (2005), and Beard, Saba, Ford, and Hill (2005), have analyzed the effects of direct or overbuild competition between cable operators and inter-modal competition from DBS in the U.S. CATV markets. Additionally, a few analyses of the Korean CATV markets have been published in Korean academic journals. This study contributes to the literature in several regards. First, this study utilizes panel data covering all cable operators in Korea, whereas most existing studies are based on cross-sectional data, particularly a small sample of cross-sectional data in the case of U.S.-based studies. The use of panel data allows for the control of unobservable operator-specific individual effects including technical efficiency, management resources, and skills. Second, the large number of duopolistic FAs in Korean CATV markets is anticipated to allow for a relatively accurate evaluation of competition effects.5 Finally, to the best of the author's knowledge, this study is one of few papers to empirically examine competition effects on cable operators' profitability. This study is organized as follows. Section 2 briefly explains the evolution of Korean CATV markets, which will be helpful in subsequent discussions. 3 and 4 comprise the first and second part of analysis, respectively. Section 3 analyzes the effects of intra-modal competition within the CATV markets and inter-modal competition from DBS on market performance. In Section 4, a brief description of the CATV market after the inception of IPTV is presented. Finally, the conclusions of this study are presented, along with some policy implications.