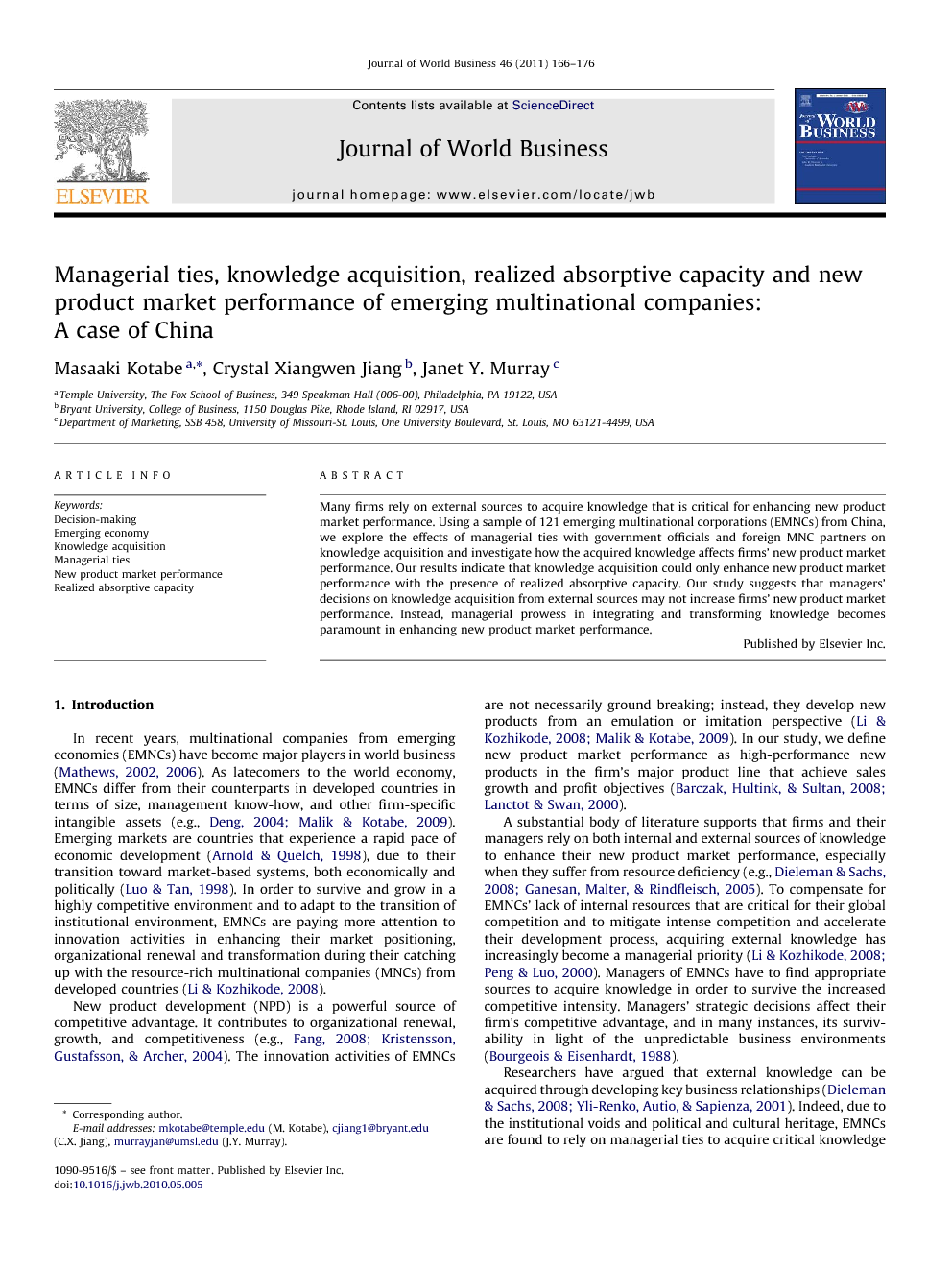 Our study supports that a firm's and its managers’ managerial ties with its external partners matter to its knowledge acquisition. In addition, although political and business ties provide a firm and its managers with an opportunity to gain access to valuable technological knowledge that are inaccessible to others outside the network (Dyer & Singh, 1998), its ability in utilizing new technology and developing routines to exploit and transform knowledge and complementary assets is essential to new product market performance. Even if the government in emerging markets is closely involved in helping local businesses with technology transfer through institutional mechanisms and regulatory regimes, overly dependent on the government relations is harmful to a firm's knowledge acquisition. Furthermore, to compete internationally against MNCs that have abundant technological and business experiences, an EMNC not only needs to leverage inter-organizational relationships to acquire external knowledge, but also needs to focus on developing its realized absorptive capacity to enhance its new product market performance. There are several limitations in this study. First, social network involves dyadic relationships. In this study, we surveyed executives of Chinese MNCs on their perceived managerial ties. Inclusion of additional variables, such as the perception of network relationships from the government officials and executives of foreign MNCs, would be beneficial to our understanding of the importance of network ties in dyadic relationships. A longitudinal study and case-based research would provide more insight into the proposed relationships. Second, knowledge can be distinguished as tacit and explicit knowledge (Nonaka & Takeuchi, 1996). Our data do not allow us to differentiate the types of knowledge that firms have acquired through managerial ties. Third, our study focuses on new product market performance, but we did not distinguish whether the new products are incremental or radical innovations, which are found to be associated with different economic returns (Sorescu & Spanjol, 2008). Fourth, the extant research falls short of identifying whether firms’ resource acquisition through political and business ties serves as complementary or supplementary assets in contributing to firms’ innovation performance. Future research should propose an integrative framework that unbundles the complementary or supplementary effects among firm resources, and investigate whether managers face trade-offs when developing different types of relationship. Last but not the least, we obtained data from MNCs in China; care must be taken before generalizing these findings to other countries. Since our study is based on a single country, we do not know whether identified managerial ties and their effects on firms’ new product market performance are a special case in a Chinese context. Accordingly, we call for further empirical research to extend our understanding of the factors that affect EMNCs’ new product market performance in other emerging markets.