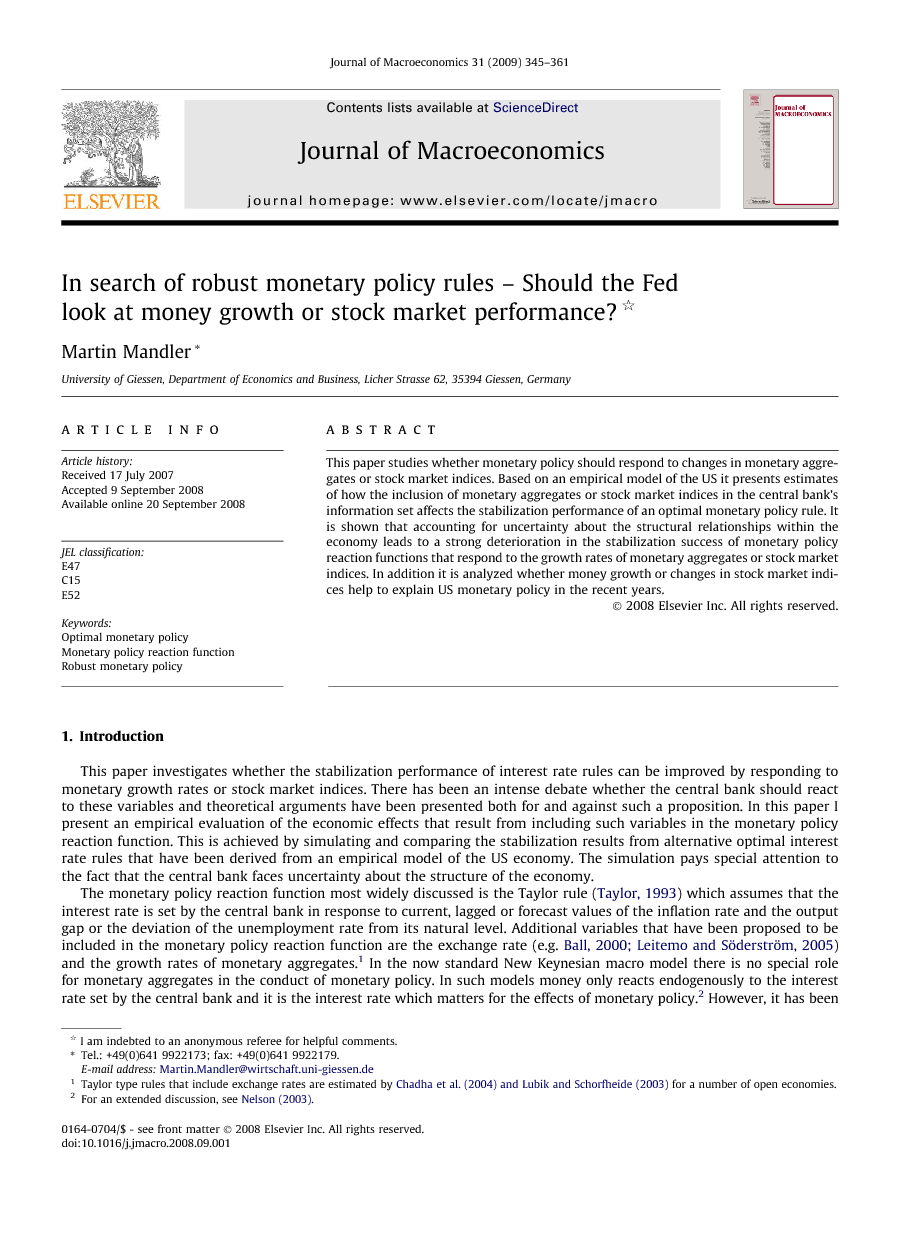 This paper has shown that the actual time series of Federal Funds Rate can be approximated by an optimal monetary policy reaction function derived from a simple structural model. Having the Federal Funds Rate also respond optimally to the growth rates of M1 or M3 improves the ability of the optimal rule to explain the actual time series of the Federal Funds Rate. In contrast, including a stock market index does not improve the fit of the optimal policy rule. These results show that monetary aggregates contain some information that helps to explain the Fed’s behavior. This does not necessarily imply that the Fed, in fact, reacts to changes in the growth rates of monetary aggregates but that money growth might be correlated with some other variables that the Fed considers in setting interest rates, such as credit growth, and financial market conditions. While the optimal reaction functions reproduce the general path of the Funds Rate quite well, the simulated interest rate is much more volatile than actually observed. Allowing for uncertainty about the true economic structure to enter into the analysis affects the comparisons between different optimal policy rules in various ways. It was shown that the volatility of the optimal Federal Funds Rate declined for almost all the policy rules under consideration. The policy rules that included monetary growth rates still tracked the actually observed Funds Rate more closely than the policy rule without them. Interestingly, all the optimized policy rules were able to explain the large decrease in the Federal Funds Rate in 2001. Even those rules that do not react to changes in stock prices recommended a strong decline in the Federal Funds Rate. A detailed study of the robustness of the different policy rules showed the stabilization performance of the simple rule (not including monetary growth rates or a stock market index) to deteriorate less relative to the other optimal rules if the model under which it was derived was assumed to be wrong. The simple rule is less sensitive to changes in the structure of the economy or to errors in the estimation of the structural relationships. While money growth or stock market data might have some predictive power for the other economic variables, the possible gains for stabilization policy from this, however, are most often compensated by the loss in stabilization performance that results from unstable and weak relationships between these financial variables and the rest of the economic system. Overall, the simulation study presented in this paper shows that assigning a prominent role to monetary aggregates in the formulation of monetary policy might have some benefits but also carries high risks. Such a strategy is only attractive if the policymaker has high confidence in his knowledge of the structural relationships within the economy. The stock market index, however, has such an unreliable relationship to the other economic variables that including it consistently in the policy rule will lead to a severe deterioration of the stabilization performance.