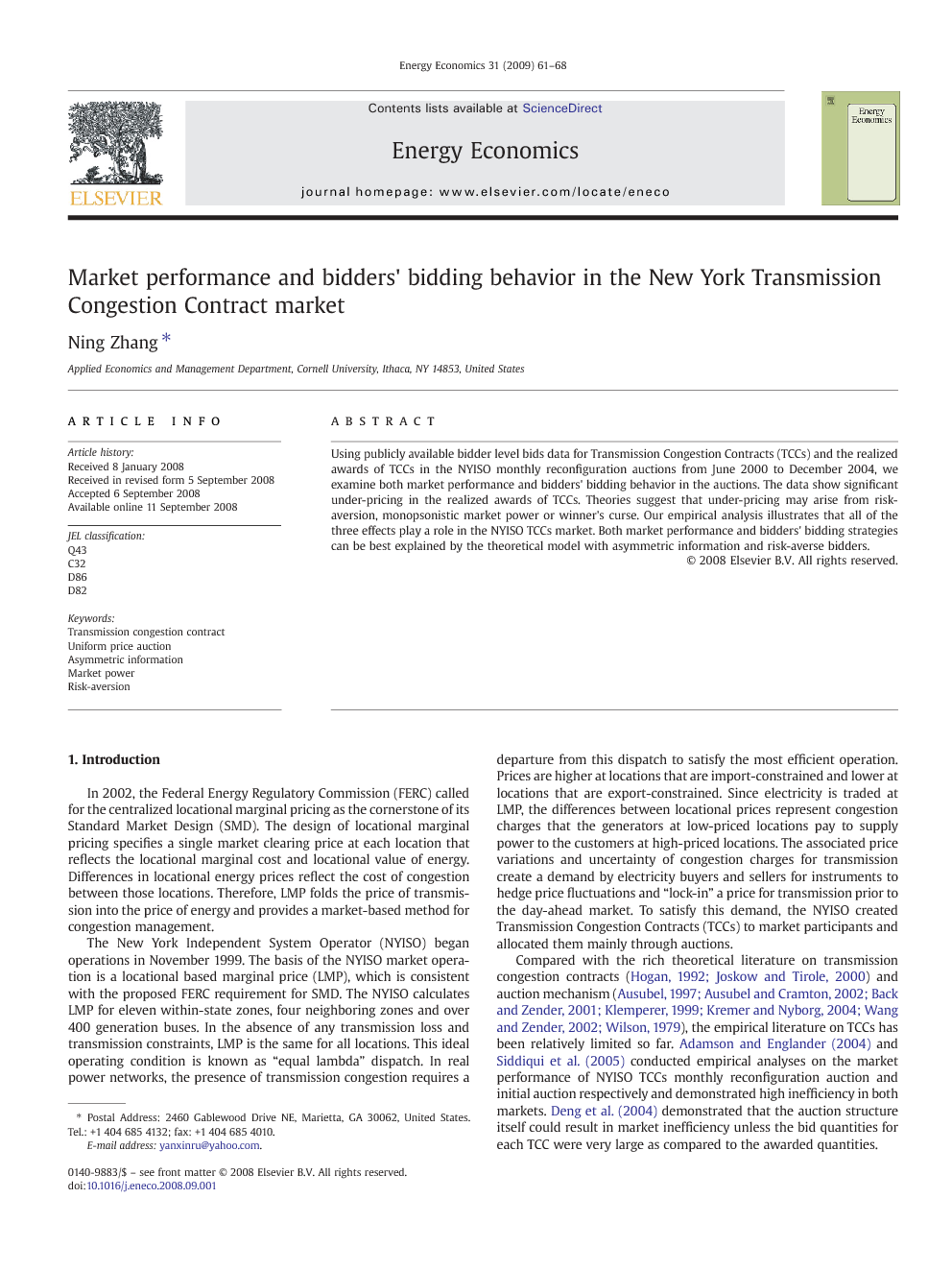 Using publicly available bidder level bids data for Transmission Congestion Contracts (TCCs) and the realized awards of TCCs in the NYISO monthly reconfiguration auctions from June 2000 to December 2004, we examine both market performance and bidders' bidding behavior in the auctions. The data show significant under-pricing in the realized awards of TCCs. Theories suggest that under-pricing may arise from risk-aversion, monopsonistic market power or winner's curse. Our empirical analysis illustrates that all of the three effects play a role in the NYISO TCCs market. Both market performance and bidders' bidding strategies can be best explained by the theoretical model with asymmetric information and risk-averse bidders.

In 2002, the Federal Energy Regulatory Commission (FERC) called for the centralized locational marginal pricing as the cornerstone of its Standard Market Design (SMD). The design of locational marginal pricing specifies a single market clearing price at each location that reflects the locational marginal cost and locational value of energy. Differences in locational energy prices reflect the cost of congestion between those locations. Therefore, LMP folds the price of transmission into the price of energy and provides a market-based method for congestion management. The New York Independent System Operator (NYISO) began operations in November 1999. The basis of the NYISO market operation is a locational based marginal price (LMP), which is consistent with the proposed FERC requirement for SMD. The NYISO calculates LMP for eleven within-state zones, four neighboring zones and over 400 generation buses. In the absence of any transmission loss and transmission constraints, LMP is the same for all locations. This ideal operating condition is known as “equal lambda” dispatch. In real power networks, the presence of transmission congestion requires a departure from this dispatch to satisfy the most efficient operation. Prices are higher at locations that are import-constrained and lower at locations that are export-constrained. Since electricity is traded at LMP, the differences between locational prices represent congestion charges that the generators at low-priced locations pay to supply power to the customers at high-priced locations. The associated price variations and uncertainty of congestion charges for transmission create a demand by electricity buyers and sellers for instruments to hedge price fluctuations and “lock-in” a price for transmission prior to the day-ahead market. To satisfy this demand, the NYISO created Transmission Congestion Contracts (TCCs) to market participants and allocated them mainly through auctions. Compared with the rich theoretical literature on transmission congestion contracts (Hogan, 1992 and Joskow and Tirole, 2000) and auction mechanism (Ausubel, 1997, Ausubel and Cramton, 2002, Back and Zender, 2001, Klemperer, 1999, Kremer and Nyborg, 2004, Wang and Zender, 2002 and Wilson, 1979), the empirical literature on TCCs has been relatively limited so far. Adamson and Englander (2004) and Siddiqui et al. (2005) conducted empirical analyses on the market performance of NYISO TCCs monthly reconfiguration auction and initial auction respectively and demonstrated high inefficiency in both markets. Deng et al. (2004) demonstrated that the auction structure itself could result in market inefficiency unless the bid quantities for each TCC were very large as compared to the awarded quantities. Previous papers, however, do not explain market inefficiency by analyzing bidders' bidding behavior in TCCs market. This paper analyzes empirically the market performance and bidders' bidding behavior in the NYISO TCCs monthly reconfiguration auction using publicly available TCCs awards data and bidder-level bids data. The NYISO TCCs auction is carried out with a uniform price format, and bidders can submit multiple bids for multiple units of the same TCCs. Our empirical analyses are thus based on the theoretical models of multi-unit uniform price auction for divisible goods. Specifically, the theories proposed by Wilson (1979), Back and Zender (1993) and Wang and Zender (2002) are tested in this paper. We find that the cleared TCCs are under-priced significantly, which amounts to a significant profit for bidders. Our empirical analyses on bidders' bidding behavior show that risk-aversion, monopsonistic market power and winner's curse all affect bidding behavior. This paper documents for the first time in the literature the empirical evidence of the winner's curse in the NYISO TCCs auction. Both market performance and bidders' bidding strategies can be best explained by the theoretical model with asymmetric information and risk-averse bidders. To our knowledge, this paper is the first attempt to study bidders' bidding behavior in the NYISO TCCs monthly reconfiguration auction. The rest of the paper is organized as follows. Section 2 describes the NYISO market. In 3 and 4, we review the theories on equilibrium bidding strategies in uniform price auction for divisible goods and their empirical implications. Section 5 provides the empirical analyses of the performance of TCCs auction. The empirical analyses of bidders' bidding behavior are carried out in Section 6. Section 7 concludes.

The transmission of electricity is vital for the development of the electricity industry. The emerging markets for financial contracts of transmission rights have attracted a lot of attention from generators, load serving entities and pure speculators. They use the contracts to either hedge their congestion cost risks or speculate on transmission market. An efficient and competitive transmission allocation mechanism is necessary for the healthy development of financial transmission rights market. In this paper, we use the publicly available TCCs auction data from the NYISO to test both market performance and bidders' bidding behavior in the NYISO TCCs auction market. As far as we know, this paper is the first attempt to study bidders' bidding behavior in the NYISO TCCs monthly reconfiguration auction. We first use the realized TCCs awards data to test auction performance. It shows that TCCs are significantly under-priced and TCCs buyers made $26.8 million net profit from 48 monthly auctions for a cost of only $3.6 million. The TCC market does not appear efficient at hedging congestion risk. Particularly, the empirical results show that more valuable TCCs are under-priced more seriously. In order to investigate the main factors contributing to the under-pricing, we analyze bidders' bidding behavior by using actual bids data. Three types of bidding variables are examined. The regression results are compared with what are expected from four theoretical models. The results show that the model with asymmetric information and risk-averse bidders is the most appropriate one to explain bidders' bidding behavior in the NYISO TCCs market. Risk-aversion, monopsonistic market power and winner's curse all play active roles in the auction. It is the first time in literature to provide the evidence of winner's curse in the NYISO TCCs auction.