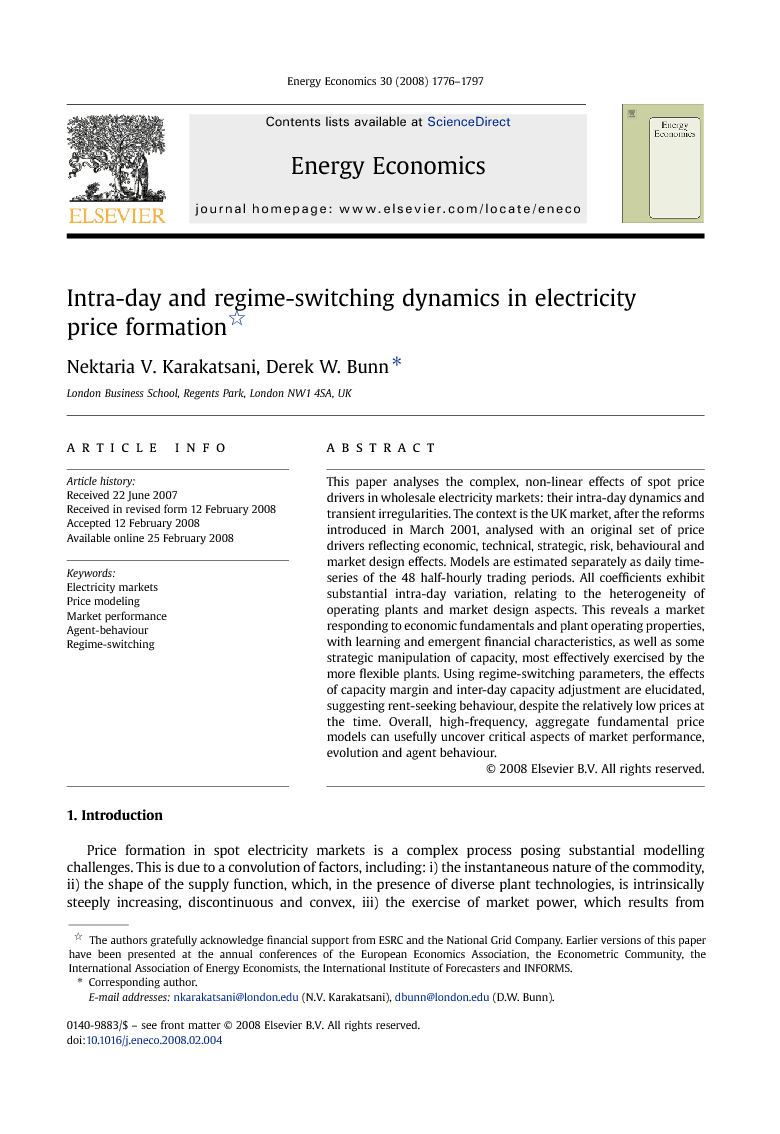 This paper analyses the complex, non-linear effects of spot price drivers in wholesale electricity markets: their intra-day dynamics and transient irregularities. The context is the UK market, after the reforms introduced in March 2001, analysed with an original set of price drivers reflecting economic, technical, strategic, risk, behavioural and market design effects. Models are estimated separately as daily time-series of the 48 half-hourly trading periods. All coefficients exhibit substantial intra-day variation, relating to the heterogeneity of operating plants and market design aspects. This reveals a market responding to economic fundamentals and plant operating properties, with learning and emergent financial characteristics, as well as some strategic manipulation of capacity, most effectively exercised by the more flexible plants. Using regime-switching parameters, the effects of capacity margin and inter-day capacity adjustment are elucidated, suggesting rent-seeking behaviour, despite the relatively low prices at the time. Overall, high-frequency, aggregate fundamental price models can usefully uncover critical aspects of market performance, evolution and agent behaviour.

Due to the idiosyncratic nature of wholesale electricity markets, spot price formation is a complex stochastic process posing substantial modelling challenges. This paper focuses on the complex non-linear characteristics of spot price drivers, in particular the intra-day dynamics and transient irregularities of their effects. First, an original, diverse set of potential influential factors is defined, motivated by the existing literature as well as market intuition. In order to clarify the elements of price variation at a high-frequency level, linear regression specifications are estimated across the 48 trading periods of the day. Subsequently, regime-switching parameters are introduced, in periods where such non-linearities arise, in order to uncover how agents react during transient market irregularities and how prices are altered as a result. This fundamental econometric analysis, undertaken for the first time at this level and frequency, reveals subtle aspects of pricing and agent behaviour. Such insights are important for regulators, in their market monitoring as well as to market agents, in order to model their risk exposures. Firstly, spot prices are influenced by a mixture of factors including economic fundamentals, plant constraints, strategic behaviour, perceived risk, trading inefficiencies, learning, and market design implications. The intensity of these effects across markets is expected to depend on the specific market configuration. Secondly, all effects exhibit substantial intra-day variation, in terms of magnitude and significance, which reflects the diurnal heterogeneity of scheduled plants as well as market design aspects. This variation would be of interest both to regulators and market participants. Thirdly, transient pricing irregularities, manifested as spikes, exhibit an interesting property; on these occasions, strategic factors appear to be significant and much more influential, whereas the impact of cost-fundamentals is constrained compared to the normal pricing regime. Hence, the magnitude of spikes, despite the diversity of underlying causes, is not arbitrary. Instead, it demonstrates a recurrent and co-ordinated generators' reaction to scarcity, whenever this arises and irrespectively of its exact source. Overall, the real-time balancing of demand and supply, inherent in electricity markets, implies a particular sensitivity of spot prices to contemporaneous market fundamentals. Clarifying these sensitivities is revealing of the degree of market efficiency and the subtleties of agent behaviour. Implications for price forecasting may also be significant. In the presence of market power and significant asymmetries across agents, which arise due to dissimilarities in their size, plant portfolio, and degree of vertical or horizontal integration, critical information on future market fundamentals may not be reflected in forward electricity prices, but be instead available to a subset of market participants, e.g. the dominant generators or integrated companies. Fundamental price models, such as those developed in this paper, would allow agents or regulatory authorities to incorporate their heterogeneous expectations about future market conditions and hence, convert their private information to a strategic advantage. A purely statistical model which does not invoke market fundamentals cannot exploit such agent-specific expectations. In terms of volatility patterns, the linear regression models allow for intra-day variations in volatility, along with the impacts of the various fundamentals, while the regime-switching regressions allow for discontinuous transitions between regular or excessive pricing, within a given trading period. Regarding the British electricity market, despite the low price era, and its fundamental explanation relating to overcapacity and reduced generation concentration, the daily price dynamics revealed substantial effects that were not truly “cost-reflective”. More specifically, our modelling reveals a market responding to economic fundamentals and plant operating constraints to a certain extent, with learning and emergent financial characteristics, but still some strategic manipulation of capacity. The latter appears more intense during trading periods of peak demand and during temporal market irregularities. The presence of strategic effects in pricing could be perceived as a natural response to the abolishment of capacity payments and consistent, to a certain extent, with the regulatory objective to reward flexibility. Nevertheless, the magnitude, diurnal persistence and cyclical pattern of these effects implies that, despite the substantial decline in wholesale prices, market power was being systematically exercised, and most effectively by the flexible plant. Still, market power was not exercised to its full potential. Although prices were particularly sensitive to margin levels and inter-day capacity adjustments, as a result of generators' bidding behaviour, they still remained at fairly low levels. This could be partially attributed to restrictions posed by underlying fundamentals, such as the overcapacity issue, the lower concentration in the generation sector and the declining path of fuel prices. An alternative conjecture is that the low wholesale price regime was being favoured by the vertically-integrated players as a convenient focal point after the removal of the cap on retail prices. To the extent that retail customers are not price sensitive, the vertically-integrated players could retain any loss of income from lower wholesale prices in their retail businesses. Just as the compulsory uniform price auction of the Pool created misleading signals for over-investment in baseload capacity, the post-Neta market may have been offering rather excessive rewards for a combination of flexible technologies and vertical integration. As various countries are currently restructuring their electricity markets or introducing further reforms, towards less centralised market regimes, the inferences derived from the reformed British market can have significant implications. Overall, high-frequency, aggregate fundamental price models can usefully uncover critical aspects of market performance, evolution and agent behaviour.