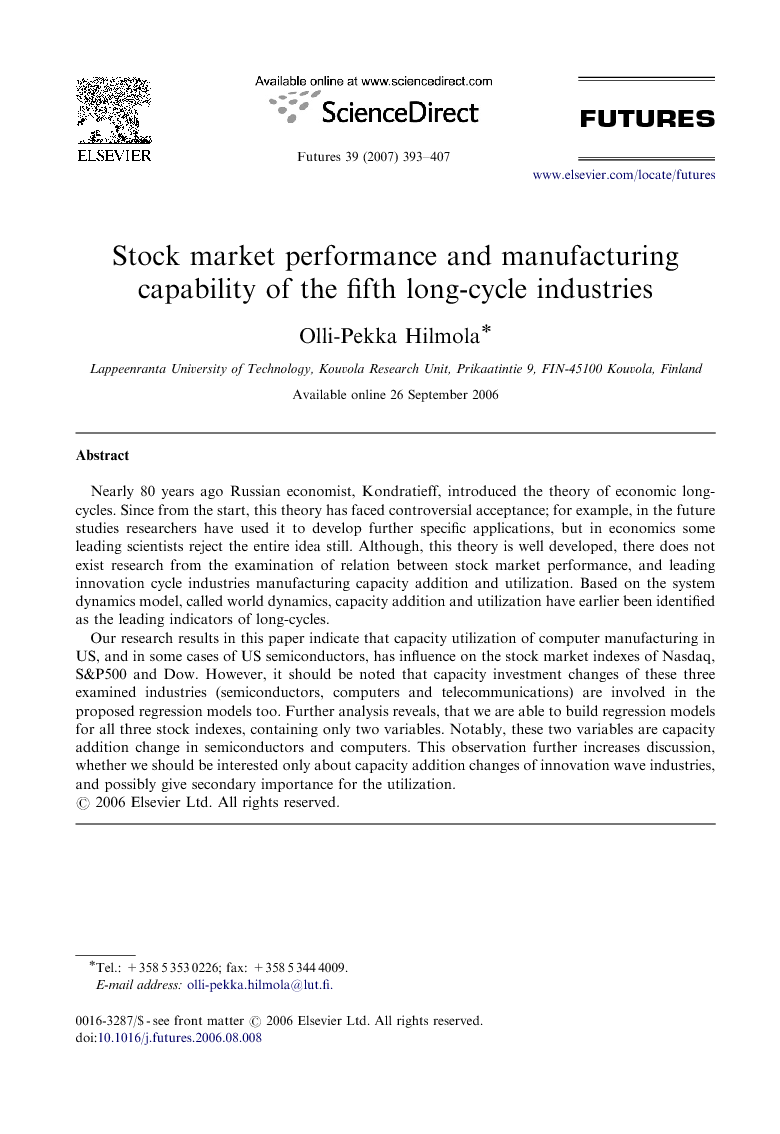 Nearly 80 years ago Russian economist, Kondratieff, introduced the theory of economic long-cycles. Since from the start, this theory has faced controversial acceptance; for example, in the future studies researchers have used it to develop further specific applications, but in economics some leading scientists reject the entire idea still. Although, this theory is well developed, there does not exist research from the examination of relation between stock market performance, and leading innovation cycle industries manufacturing capacity addition and utilization. Based on the system dynamics model, called world dynamics, capacity addition and utilization have earlier been identified as the leading indicators of long-cycles. Our research results in this paper indicate that capacity utilization of computer manufacturing in US, and in some cases of US semiconductors, has influence on the stock market indexes of Nasdaq, S&P500 and Dow. However, it should be noted that capacity investment changes of these three examined industries (semiconductors, computers and telecommunications) are involved in the proposed regression models too. Further analysis reveals, that we are able to build regression models for all three stock indexes, containing only two variables. Notably, these two variables are capacity addition change in semiconductors and computers. This observation further increases discussion, whether we should be interested only about capacity addition changes of innovation wave industries, and possibly give secondary importance for the utilization.

We could argue that Kondratieff's theory of long-cycles as being applied in stock markets brings favorable results: Fifth innovation cycle industries eventually seem to explain the behavior of stock market indices in US. Interestingly, our research work indicated that capacity addition is the major factor to explain stock market development, and manufacturing utilization plays only minor importance. This finding is giving great importance, since capacity utilization alone is a complex issue, as was shown in section two. Secondly, we could argue that semiconductors and computers are leading manufacturing industries in the fifth innovation wave. Although telecommunications has gained plenty of attention in recent years, these two identified industries seem to have taken the leading place. We explained this issue by the integrating nature of telecommunication products; knowledge and semi-finished items of different industries are integrated in their products to represent complete package. Semiconductors are one of the most important component types in telecom products, thus fostering the importance of this sector. There exists number of avenues for further research in the topic area of this research work. For example, leading innovation industries in US are dominated by small number of companies. It would be extremely interesting to analyze their press releases concerning capacity addition, and possibly build regression models, which are able to predict stock index behavior in the future. Our models proposed in this paper concern only current period's capacity addition as well as utilization, which are used to explain stock index development. However, building leading indicators from company based investment plans would give more visibility concerning the future state of the market. Second, interesting avenue for further research would be the previous fourth long wave industries, and stock index development at that corresponding time. This research work would most probably give more evidence for the theory developed for this seminal research work. Third avenue for future research would be the leading industries of the sixth innovation and economic long wave, namely nano- and biotechnology (e.g. Traore [31]), and their product development as well as market enlargement and investment plans. The rise of the sixth wave depends greatly in their ready-made products and planned investments. We expect this sixth long wave to appear somewhere around 2030, but it would be great benefit for the whole world to have it available sooner, (further dampening the depression effect of the fifth cycle).