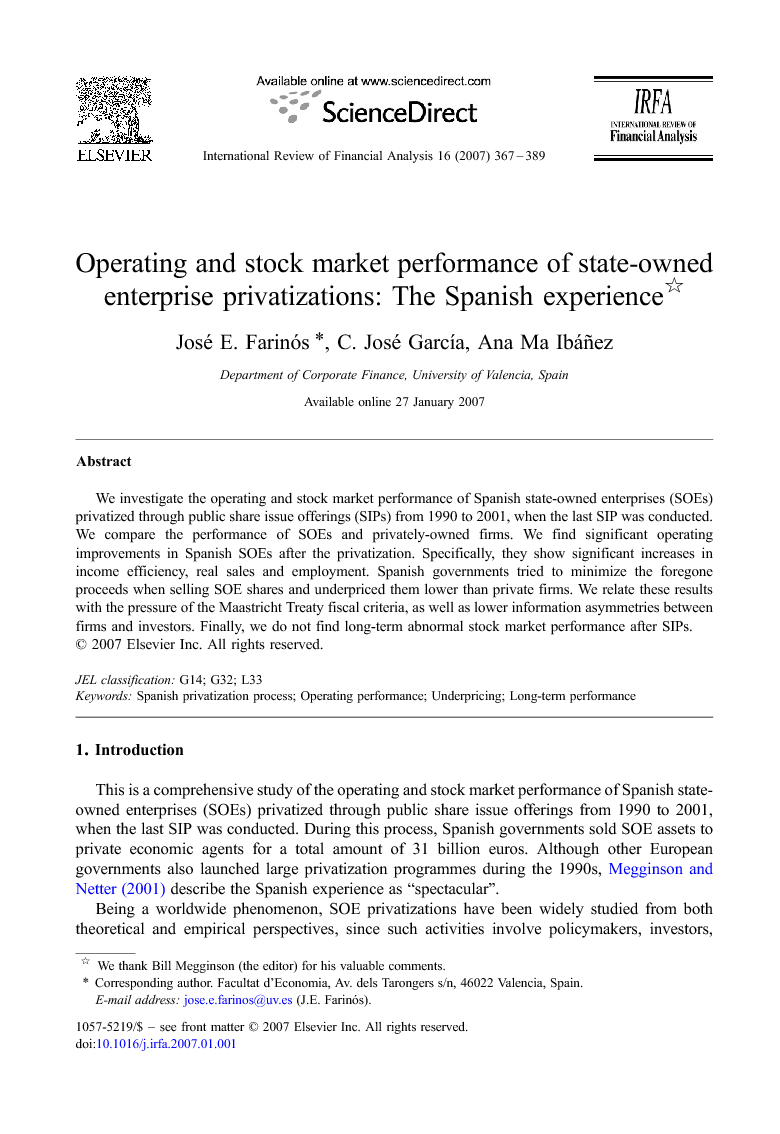 We investigate the operating and stock market performance of Spanish state-owned enterprises (SOEs) privatized through public share issue offerings (SIPs) from 1990 to 2001, when the last SIP was conducted. We compare the performance of SOEs and privately-owned firms. We find significant operating improvements in Spanish SOEs after the privatization. Specifically, they show significant increases in income efficiency, real sales and employment. Spanish governments tried to minimize the foregone proceeds when selling SOE shares and underpriced them lower than private firms. We relate these results with the pressure of the Maastricht Treaty fiscal criteria, as well as lower information asymmetries between firms and investors. Finally, we do not find long-term abnormal stock market performance after SIPs.

This is a comprehensive study of the operating and stock market performance of Spanish state-owned enterprises (SOEs) privatized through public share issue offerings from 1990 to 2001, when the last SIP was conducted. During this process, Spanish governments sold SOE assets to private economic agents for a total amount of 31 billion euros. Although other European governments also launched large privatization programmes during the 1990s, Megginson and Netter (2001) describe the Spanish experience as “spectacular”. Being a worldwide phenomenon, SOE privatizations have been widely studied from both theoretical and empirical perspectives, since such activities involve policymakers, investors, consumers and workers. Obviously, studies are necessary in order to provide enough background and knowledge about the consequences and undesired deviations from original objectives. Broadly speaking, the goals of privatization are to (i) raise revenue for the state; (ii) promote economic efficiency; (iii) reduce government interference in the economy; (iv) promote wider share ownership; (v) provide the opportunity to introduce competition; (vi) subject SOEs to market discipline; and (vii) develop the national capital market.1 As a consequence of the complexity of these goals, countries have chosen different methods for carrying out their privatization policies. Brada (1996) proposes four categories of classification of privatization methods: (i) privatization through restitution; (ii) privatization through the sale of state property (as either direct sales or as share issue privatizations “SIPs”); (iii) voucher privatization; and (iv) privatization from below. Most of the academic studies on the privatization topic have focused on examining the effect of privatizations on the financial and operating performance of firms privatized through share offerings.2 The evidence indicates significant improvements in operating performance, which, in turn, does not seem to support the market failure argument against government intervention. However, only a few studies exist that analyse the market performance of SIPs. Comstock, Kish, and Vasconcellos (2003) claim that SIPs are expected to have a stock market performance similar to private-sector equity public offerings. Accordingly, state-owned firm privatizations reveal two key characteristics analogous to privately-owned firms, that is, initial underpricing and long-term underperformance. From the investors' point of view, stock market information is extremely relevant as they may be involved with the initial or seasoned public offering and, therefore, they need to know how privatization offers tend to perform in both the short and the long run. The primary objective of this study is to present evidence of the Spanish SOE privatization experience through SIPs during the 1990s and early 2000s. We focus on this method of transferring property from the state to the private sector because Spanish governments have raised more than 83% of the total amount of privatization revenues from share issue offerings. Consistent with the international evidence, Spanish governments sold the so-called “crown jewels” through SIPs, that is, large and well-known Spanish enterprises, most of them from strategic industries such as energy, telecommunications, banking or airlines. We relate the Spanish privatization “boom” during the 1990s to two main factors: (i) that of economic liberalism reaching a peak during that period, and (ii) the necessity of meeting the Maastricht Treaty fiscal criteria in order to enter the European Monetary Union Third Phase in 1999. Our results show that Spanish SOEs improved their efficiency and increased their real sales, capital expenditures and employment after going public, but not their profitability. We interpret this as meaning that SOE firms were mainly interested in growth as a strategy to reduce the risk of a hostile takeover that could transfer the ownership of national strategic companies to foreigners once “golden share” protection had ended. Furthermore, and consistent within the context of strong fiscal pressure due to the necessity of meeting the Maastricht Treaty fiscal criteria in order to enter the European Monetary Union Third Phase, we find that Spanish governments tried to minimize the foregone proceeds when conducting the SIPs. Results from long-term stock market performance support the idea that investors who purchased SOE shares were correct in assuming that Spanish SOE issues were rationally priced by the markets, as we do not detect significant long-term abnormal returns after SIPs. We compare our findings for SIPs with those of private firm issues in order to detect any differential behaviour between state-owned and private firms. Although we obtain similar results for operating performance, evidence for short and long-run stock market performance differs. Hence, results from short-run stock market performance suggest that private issuers are more affected by information asymmetries between the issue firm and investors than SOEs. Therefore, private firms underprice to a greater extent. Our findings from the long-term stock market performance analysis support the contention of larger information asymmetries in the case of private firm issuers as we show that small private firms that conduct a seasoned equity offering experience economically and statistically significant stock-return underperformance during the two years after the issue. That is, equity was overpriced at the time of the issue. Although researchers have made much effort in performing multi-country studies, in our opinion individual-country studies are necessary. As we state above, some of the evidence from Spain is not consistent with that achieved in multi-country studies in which Spanish SOEs were included. In our opinion, one possible explanation for this discrepancy could be specific-country sample selection bias,3 since both multi-country and individual-country studies face common methodological problems.4 Therefore, individual-country studies can be a good way to test the robustness of evidence from multi-country studies. The remainder of the paper is organized as follows. Section 2 summarizes the Spanish privatization process. Section 3 reviews the evidence of privatization on the operating and stock market performance. Section 4 describes our sample and the methodology used in the different analyses. The results are discussed in Section 5. In Subsection 5.1 we investigate the post-privatization change of SOE operating performance. 5.2 and 5.3 report on the analysis of the SOE short and long-term stock market performances, respectively. Section 6 concludes.

This paper investigates the operating and stock market performance of Spanish state-owned enterprises (SOEs) privatized through a public issue offering (SIP) from 1990 to 2001, when the last SIP was conducted. Multi-country sample studies document improvements in the operating performance and stock market underpricing of newly privatized firms. Evidence on long-term stock market performance is not definitive. In this context, this study seeks to further provide empirical evidence of individual-country performance following privatization. In interpreting our results, we must keep in mind the context of the Spanish privatization process: (i) the 1990s were a period of strong pressure for fiscal balance because of the necessity of meeting the Maastricht Treaty fiscal criteria in order to enter the European Monetary Union Third Phase, and (ii) the ideological change towards economic liberalism promoted by the Spanish Conservative Party (Partido Popular — PP) when it came into power in mid-1990s. Consistent with international evidence, Spanish governments sold the so-called “crown jewels” through SIPs, that is to say, the largest and better known SOEs were sold in several tranches through public equity offerings. In general terms, SOE firms improved their operating performance after their privatization. However, and unlike multi-country studies, Spanish SOEs did not become more profitable after being privatized. Our evidence suggests that Spanish privatized SOEs were more interested in growing and improving efficiency than in improving their profitability. We interpret this result as an attempt to reduce the risk of a foreign hostile takeover once “golden share” protection had ended. Although underpricing is a common feature in public issue offerings, our results show that Spanish governments tried to minimize the foregone proceeds as they were lower than those of private firm issues. We interpret the observed underpricing as an instrument to gain the support of many small investors in order to create a wide shareholders base (which, in turn, is an added impediment to the success of a hostile takeover) and to enhance the ‘political success’ of the privatization process. In fact, we find a higher participation of small investors in SOE initial offerings than in private firm initial offerings. Most important, unlike the evidence from some multi-country samples, we do not find significant long-term abnormal performance following SIPs. This result means that investors who purchased SOE shares were correct in assuming that these issues were rationally priced by the market. All through this study, we compare our findings for SIPs to those of private firm issues. Both state-owned enterprises and private firms present similar results. The most noticeable difference is that private firm underpricing is higher than SOE underpricing. Given the greater weight that small and medium size firms have in the private firm sample, from our point of view a heavier underpricing is necessary in order to overcome the asymmetric information problem between firms and investors. This problem is not fully resolved as small private firms that conduct a seasoned equity offering were able to sell overpriced shares, as they show significant negative abnormal returns during two years after the issue.