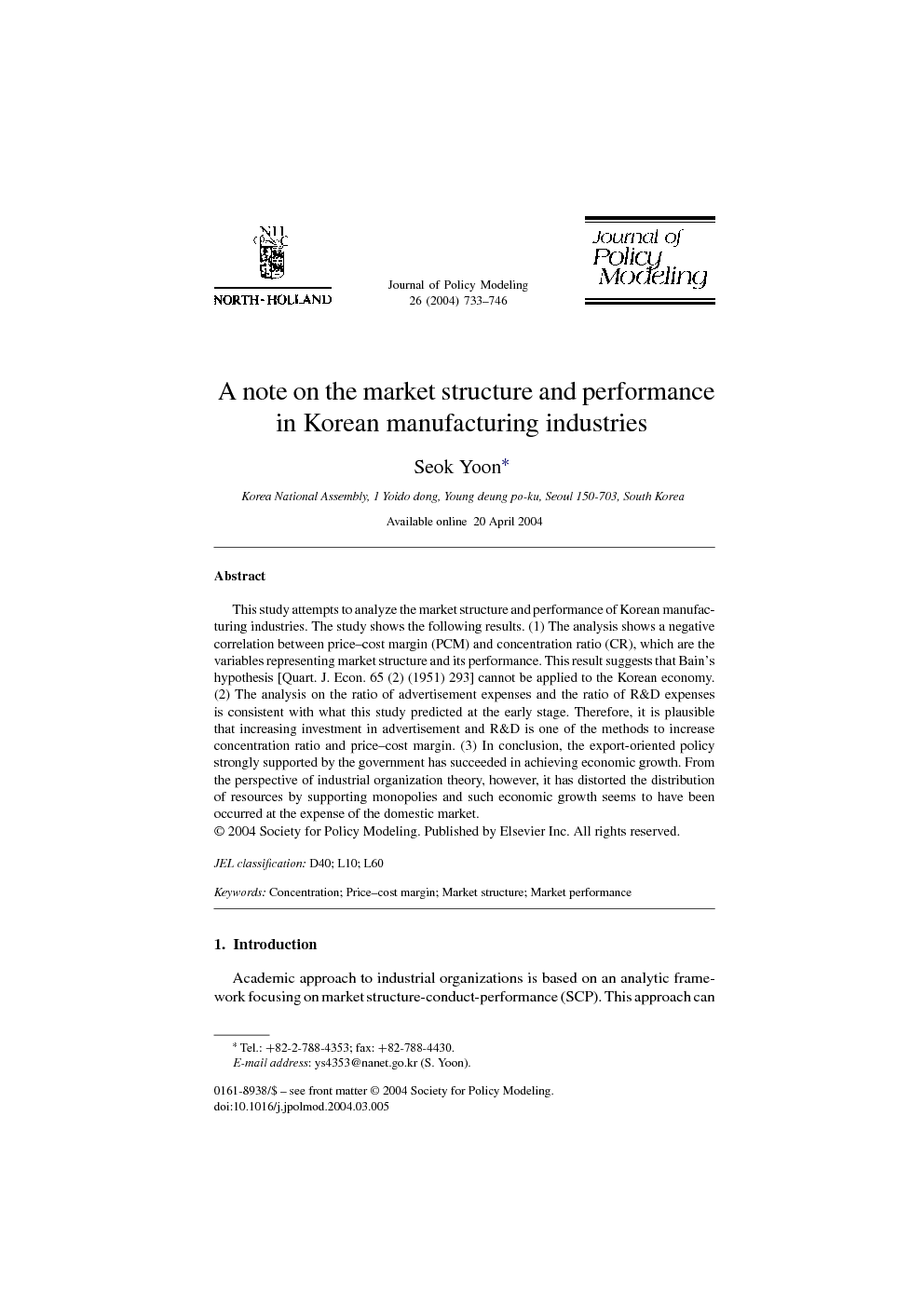 This study attempts to analyze the market structure and performance of Korean manufacturing industries. The study shows the following results. (1) The analysis shows a negative correlation between price–cost margin (PCM) and concentration ratio (CR), which are the variables representing market structure and its performance. This result suggests that Bain’s hypothesis [Quart. J. Econ. 65 (2) (1951) 293] cannot be applied to the Korean economy. (2) The analysis on the ratio of advertisement expenses and the ratio of R&D expenses is consistent with what this study predicted at the early stage. Therefore, it is plausible that increasing investment in advertisement and R&D is one of the methods to increase concentration ratio and price–cost margin. (3) In conclusion, the export-oriented policy strongly supported by the government has succeeded in achieving economic growth. From the perspective of industrial organization theory, however, it has distorted the distribution of resources by supporting monopolies and such economic growth seems to have been occurred at the expense of the domestic market.

Academic approach to industrial organizations is based on an analytic framework focusing on market structure-conduct-performance (SCP). This approach can be divided into two categories according to its purpose and method: the structural approach and the behavioral approach. Most studies on industrial organization were conducted in the United States between 1930s and the 1960s. These studies gained importance as monopolies became an increasingly serious economic problem both in the United States and in Europe. Among the academics, Bain (1951), through the SCP model, showed that monopolistic or oligopolistic market structure would lead to welfare loss, as a few dominant enterprises tend to exercise their increasing market power over time, leading to an eventual deterioration in market performance. Such deterioration is one of the most important reasons to consider Bain’s hypothesis:1 that a monopolistic industry, controlled by a few enterprises, is likely to limit competition and result in excess profit because of the existence of strong market power. Since 1951, numerous empirical analyses of Bain’s SCP approach, especially by White (1974), Martin (1979), Caves (1980), Geroski (1982), and Yamawaki (1986) have shown that there is a positive correlation between the concentration ratio and the price–cost margin. Since the 1970s, some developing countries, including Mexico and Taiwan, have made empirical studies to prove the existence of this relationship in their economies.2 When analyzing developing countries, we must consider some unique characteristics that differ from those of developed countries. First, developing countries intentionally promote monopolies under the protection of government because monopoly is viewed as a means of overcoming the state’s meager capital accumulation during the early stages of industrialization. Government encourages domestic industries with subsidies or tax reductions to promote exports, while strictly controlling imports to protect domestic monopolies from international competition. Therefore, domestic monopolies can strengthen their monopolistic power and have more opportunities to exercise it. Second, developing countries have relatively small markets. Thus, enterprises strive to obtain a monopolistic position in these small markets, while at the same time trying to prevent other enterprises from entering. Existing firms in a small market produce goods only within an area where there are economies of scale. This means that the cost of producing one unit of goods or services decreases as the volume of production increases. Therefore, these firms implement a wide variety of strategies to impose entry barriers against new competitors, which leads to an eventual increase in social costs. Third, foreign market factors as well as domestic factors must be properly considered because the proportion of exports and imports to GNP continues to grow as the market opening accelerates. Provided that exports and imports expand their importance as much as input and output factors in the domestic market, it is obvious that they have greater influence, not only on the domestic economy itself, but also on the concentration ratio and the price–cost margin. If the above factors3 are properly considered, empirical studies of developing countries may show a clearer correlation between market structure and performance. As a result, they can be a more reliable source for policy implications. Many studies on the correlation between market structure and performance have already been made in Korea, especially by Lee (1981), Cho (1987), Cho and Oh (1989), and Baek (1991). They show, however, different results according to their respective period, modeling, and approach. Therefore, this paper focuses on finding what determines market structure and performance based on previous studies, and how such determinants contribute to developing industrial organization theory and to implementing economic policies.

This study attempted to explore, in general, what factors have impacted on market structure and performance in Korean manufacturing industries. Its estimation results provide some policy implications as follows. First, the analysis indicates a negative correlation between concentration ratio (CR) and price–cost margin (PCM) in general. In other words, Bain’s hypothesis (1951) may be true only in the small and medium enterprises, but not in the large ones. Such contradictory assumption can be proved by several facts. Since the 1990s, Korean government has employed market opening policy which strongly supports import and export, and the policy has declined the concentration ratio in the domestic market. Export promotion policies including export subsidy has resulted in the decline of price–cost margin due to the improvement of the market performance. Therefore, we can reconfirm that the market opening policy of Korea has been more effective on large enterprises than small and medium ones. Second, the analysis on the ratio of advertisement expenses (ADSAL) and the ratio of R&D expenses (RDSAL) shows what this study expected at the early stage. These two variables have a positive effect on both concentration ratio and price–cost margin, and ADSAL has a positive relation with price–cost margin with higher significance. This result shows that R&D leads to innovative technology while advertisement serves as an entry barrier to limit free competition. Therefore, we need a policy to prevent possible negative effects of such monopolistic activities. It must be also reminded that Eq. (4) which estimates the concentration ratio (SCR) considering export and import, indicates negative. This result suggests that Korea can make its market more competitive by opening it and consequently reducing SCR. Thus, Korea must maintain and strengthen its market opening policy. Third, the impact of ratio of exports (EXSAL) and imports (IMSAL) on the concentration ratio and price–cost margin of the domestic market is positive. Korea has executed many export-oriented policies for a long time. Such policies, in turn, have increased imports of production goods needed to manufacture export goods and have given firms the power to monopolize the domestic market. Future import policies must open the domestic market only after making a path to promote competition within the market. The export-oriented policy strongly propelled by government has succeeded in achieving economic growth. From the perspective of industrial organization, however, it has distorted the distribution of resources by supporting monopolies, and such economic growth seems to have been possible at the expense of the domestic market. In conclusion, future export policies must be oriented not to benefiting a small number of industries but to facilitating competition.