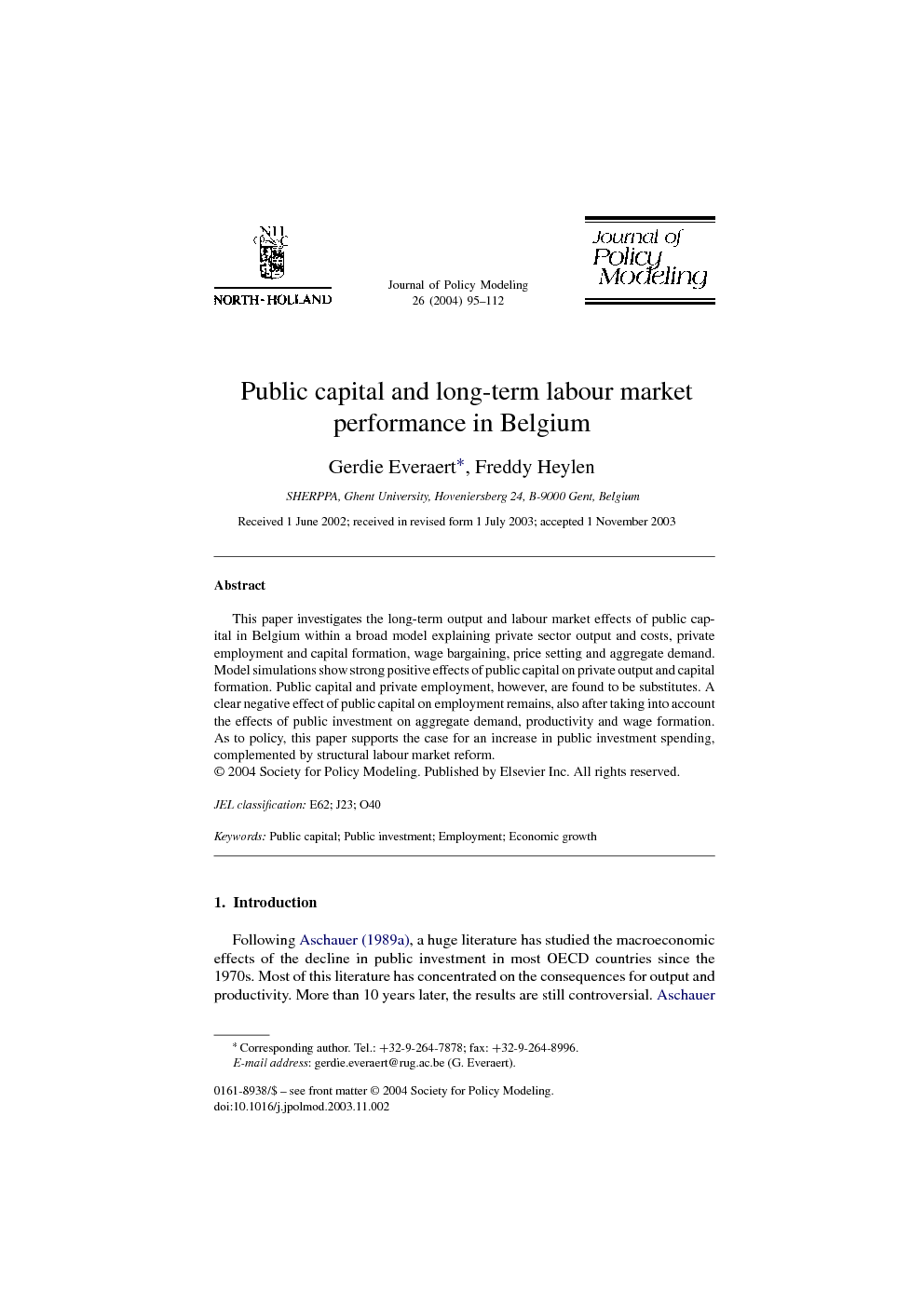 Following Aschauer (1989a), a huge literature has studied the macroeconomic effects of the decline in public investment in most OECD countries since the 1970s. Most of this literature has concentrated on the consequences for output and productivity. More than 10 years later, the results are still controversial. Aschauer, 1989a and Aschauer, 1989b found highly positive and significant effects of infrastructure on productivity growth in the US and the G7. In more recent work, however, many authors have re-examined these results, often within another theoretical framework or using another methodology. Some confirm Aschauer’s conclusions, others reject them (see Sturm, Kuper, & Haan, 1998, for a survey). This paper studies the effects of public capital formation on the labour market. We focus on Belgium, which like many other European countries is characterised by relatively rigid labour markets and high unemployment. For two reasons this research may be important. First, extensive studies of the labour market effects of public investment are still very scarce. Second, despite the previous, it has often been recommended that in the fight against European unemployment, investment in public infrastructure should be raised (see e.g., the European Commission’s White Paper of 1993 or Drèze & Malinvaud, 1994). Our main goal in this paper is to evaluate the relevance of this recommendation. Focusing on Belgium, we investigate whether or not public capital formation improves labour market performance in general, and employment in particular. To answer this question, we have developed and estimated a dynamic structural model for the Belgian economy explaining private sector output and costs, private employment and unemployment, private capital formation, wage bargaining, price setting and aggregate demand. The model allows for three channels of influence of public capital on employment: (i) direct complementary or substitution effects for given output, (ii) indirect effects on real wages, due to changes in labour productivity and/or the unemployment rate, (iii) indirect effects caused by changes in aggregate demand and the output level. Due to space limitations, we will concentrate in this paper on the main characteristics of the model and on the most important estimated long-run equilibrium relations and parameters. A complete and detailed description can be found in an underlying working paper (see Everaert & Heylen, 2000). Once estimated, we use the model to simulate private sector performance under an alternative public investment policy. More specifically, we analyse the economy’s evolution if a very strong decline in public investment during the period 1982–1989 had not occurred. It should be emphasised that the perspective of this paper is broader than what has usually been done in the literature. First, as we have mentioned before, existing research has paid relatively little attention to the influence of public capital on employment. Second, relevant findings on the employment effects of public capital generally concern only the direct complementary or substitution effects. Estimating private sector cost functions and/or factor share or input demand equations, most studies find that (i) public capital reduces private sector costs, (ii) public capital acts as a substitute for intermediate inputs and often also labour, (iii) public and private capital are complements (see again Sturm et al., 1998). In this paper we define and simulate all relevant channels of influence. The remainder of the paper is as follows. Section 2 discusses our model. Section 3 presents the estimates of the model for Belgium using annual data for 1965–1996. To detect the effects of public capital on economic growth and the labour market, Section 4 reports the results of our simulation experiment. We find that public investment stimulates economic growth, confirming Aschauer’s public capital hypothesis. Surprisingly, however, public investment also generates more unemployment. Section 5 discusses the policy implications of our findings.

In this paper we develop and estimate a structural model to analyse the long-run impact of public capital on private sector performance, in particular (un)employment, in Belgium. The estimates show that services from public capital significantly reduce private sector cost, for given output and wages. An increase in the public capital stock with 1 euro reduces long-run private cost with 0.24 euro. The output elasticity of public capital implied by these estimates equals 0.31, which confirms Aschauer’s public capital hypothesis as well as our earlier results (Everaert & Heylen, 2001), although a totally different methodology has been used. With respect to private sector inputs, public capital and labour are found to be substitutes, public capital and private capital complements. Model simulations show that the basic negative relationship between public capital and employment is not altered once the effects of a change in public capital on aggregate demand and wages are taken into account, on the contrary. As to policy, our research strongly supports the case for an increase in public capital spending, although not unconditionally. The main benefits are obvious. We find — at least for Belgium — that public capital contributes significantly to higher output and productivity growth. In the light of current concerns, e.g., about the growth gap between the EU and the US or about the future retirement burden, it is clearly important to strengthen the economy’s productive capacity. Public capital spending should not, however, be raised unconditionally. This paper has also demonstrated the need for complementary measures. First of all, in contrast to suggestions by, e.g., the European Commission (1993), higher public capital spending may cause (more) unemployment. Part of the rise in unemployment is due to upward pressure on real wages prompted by an increase in labour productivity. Part is also due to the often observed weak responsiveness of Belgian wages to rising unemployment itself (see also Abraham, De Bruyne, & Auwera, 2000; Heylen & Van Poeck, 1995). If policy makers want higher public investment spending to contribute to employment, complementary measures to enhance wage moderation and wage flexibility are (again) called for. In this respect, our results support recommendations by, e.g., Calmfors (1998) or Wyplosz (2001). Furthermore, labour market performance may benefit from a careful selection of public investment projects. Our empirical analysis relies on a broad concept of public capital. It does not imply that all investment projects bring about substitution of labour. For example, investment in training facilities or mobility for the unemployed may be beneficial for employment. So may infrastructure investment aimed at structural conversion of weak regions. Further research on the labour market effects of sub-categories of public capital is required here. Complementary public investment and labour market policy is important also from a different perspective. It has often been argued that labour market reform is unlikely to succeed in an unfavorable macroeconomic environment (e.g., Allsopp & Vines, 1998 and Wyplosz, 2001). The growth stimulating effect of public investment can be used to raise the short-run benefits of structural reform and consequently its probability of success. The second reason for not unconditionally increasing public investment results from existing budgetary constraints. Given the enduring need in Belgium to reduce the government debt ratio, as well as the restrictions imposed by the EMU Stability and Growth Pact, there is no room for deficits anymore, not even temporary ones. On the one hand, one may regret this. Our analysis confirms that an increase in government investment strengthens the productive capacity of the economy, with no permanent worsening of the government budget. Furthermore, it has been shown in various studies that fiscal consolidation has a higher probability of success when government investment is increased rather than cut (e.g., Alesina & Perotti, 1996 and Heylen & Everaert, 2000). On the other hand, as long as this narrow framework exists, it will force policy makers to carefully balance the costs and benefits of their spending decisions and to improve the composition of their expenditures. Higher public investments are still possible, but they should be financed from budgetary margins created by reductions elsewhere (e.g., declining interest payments or other transfers). Even then, the long-run benefits of public investment should still be balanced against the benefits of faster debt reduction.