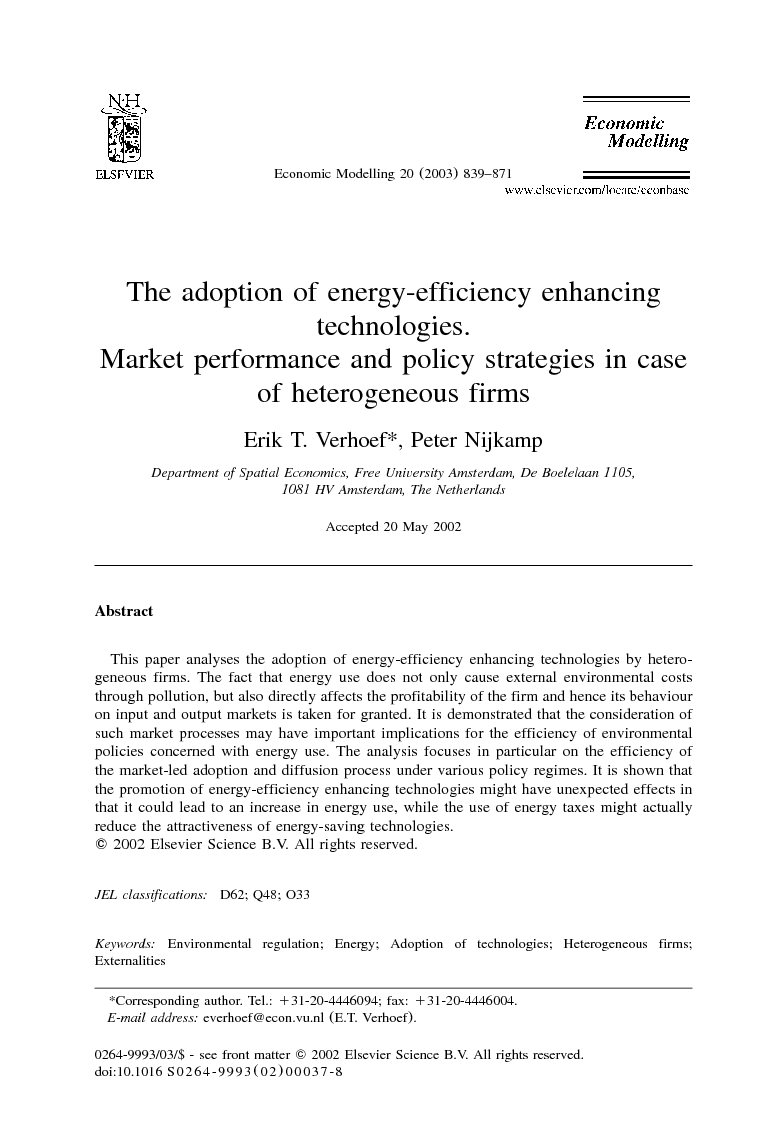 This paper analyses the adoption of energy-efficiency enhancing technologies by heterogeneous firms. The fact that energy use does not only cause external environmental costs through pollution, but also directly affects the profitability of the firm and hence its behaviour on input and output markets is taken for granted. It is demonstrated that the consideration of such market processes may have important implications for the efficiency of environmental policies concerned with energy use. The analysis focuses in particular on the efficiency of the market-led adoption and diffusion process under various policy regimes. It is shown that the promotion of energy-efficiency enhancing technologies might have unexpected effects in that it could lead to an increase in energy use, while the use of energy taxes might actually reduce the attractiveness of energy-saving technologies.

Environmental pollution by firms and the regulation of the resulting externalities have been studied extensively in environmental economics. In the most elementary economic model of environmental regulation, firms’ technologies are held fixed, and emissions can only be reduced by limiting production levels through, for instance, Pigouvian taxation. It has for long been recognized, however, that apart from such a limitation of production and consumption, the adoption of environmentally friendly technologies in production processes may offer an important alternative means of reducing emissions (Orr, 1976). This notion has given rise to a relatively large body of literature, addressing the efficiency of environmental regulation in terms of incentives given to firms to adopt cleaner technologies (Orr, 1976, Magat, 1978, Downing and White, 1986, Baumol and Oates, 1988, Malueg, 1989, Milliman and Prince, 1989 and Jung et al., 1996). The general conclusion emerging from such studies is that ‘economic’ instruments (taxes, tradeable permits) usually provide greater incentives for environmental innovations than ‘non-economic’ instruments, such as standards. Most of these studies consider the case of pollution abatement technologies where the pollution is a purely external cost, in the sense that there are no benefits from the adoption of cleaner technologies for the firm itself, other than reduced environmental taxes or the compliance with compulsory environmental standards. However, in particular when emissions are a direct result of energy use—like in case of CO2-emissions—this may be an overly simplifying assumption. In such cases, energy-efficiency enhancing technologies may be available, for which the reduction in emissions goes hand in hand with a more efficient use of one of the inputs in the production process, namely energy. This implies that internal and external cost reductions are intertwined, which may seem attractive at first sight in that it offers the possibility of ‘win-win situations’. Although this may certainly be the case, we will show in this paper that there may also be some particular complications arising from this property of energy-efficiency enhancing technologies, which can give rise to counter-intuitive and sometimes counter-productive impacts of environmental policies. This is in particular true because the adoption of the technology will generally directly affect the firm's production cost structure, and hence its behaviour on input as well as output markets. The paper therewith provides an economic analysis of the situation where firms can choose between—or, indeed, combine—output restriction and technology adoption in response to environmental policies. There are two other features of the model presented in this paper that are worth mentioning here, and that distinguish the analysis from those in most of the literature. The first is that not only firms in isolation will be considered. Instead, also the effects of (non-strategic) interactions between firms—in the same market—are taken into consideration when studying the adoption of energy-efficiency enhancing technologies, and the impacts of policies thereupon. The second feature is that the firms need not necessarily be identical. We allow for differences in the firms’ production technologies, as reflected in the specification (the parametrization in particular) of their production functions. The effects of heterogeneity among firms on the efficiency of environmental policies may certainly be non-trivial (Baumol and Oates, 1988), and have, motivated by the empirical relevance, recently received growing interest in studies on externalities caused by multiple firms (Helfand, 1991, Helfand, 1993, Jung et al., 1996 and Verhoef and Nijkamp, 1997). The paper is organized as follows. The next section presents the basic model of the firms, the market, and the energy-efficiency enhancing technology. In Section 3 some general results are derived for the case where energy is efficiently priced. Section 4 considers the existence of external costs of energy use for the efficiency of the adoption and diffusion process, and discusses the most important policy implications. Section 5 concludes. Finally, some illustrative numerical examples are presented in Appendix A.

In this paper, we have studied the adoption of energy-efficiency enhancing technologies, requiring irreversible investments, by possibly heterogeneous, small price-taking Cournot-oligopolists. Attention was given to the fact that energy use not only causes external environmental costs through pollution, but also directly affects the profitability of the firm, and hence its behaviour on input and output markets. As a consequence, Pareto optimality may require a delicate mix of output reduction by some firms, and the adoption of a new technology by others, possibly combined with output reduction, but in some cases expansion of output instead. It was demonstrated that the consideration of such notions may have important, and sometimes counter-intuitive implications for the efficiency of environmental policies directed to energy use. For instance, the promotion of energy-efficiency enhancing technologies by means of subsidies may be counter-productive in that it could actually lead to an increase in energy use (this was well-known already), and the use of energy taxes may actually reduce the attractiveness of energy-saving technologies (which is probably more surprising). Both possibilities become more likely if the demand for the output is more elastic. An important conclusion arising from the exercise is that the role of an optimal energy tax is far more subtle than that of stimulating adoption per se. Instead, an energy tax will stimulate efficient adoption; that is, it promotes adoption by firms that should adopt from a social point of view, and prevents adoption by firms that should not adopt from this viewpoint. Indeed, it was shown that a market-led diffusion process of an energy-efficiency enhancing technology in the absence of optimal energy taxes may adversely affect the industry's structure, and may prevent the overall social optimum from being attainable after this process has finished.