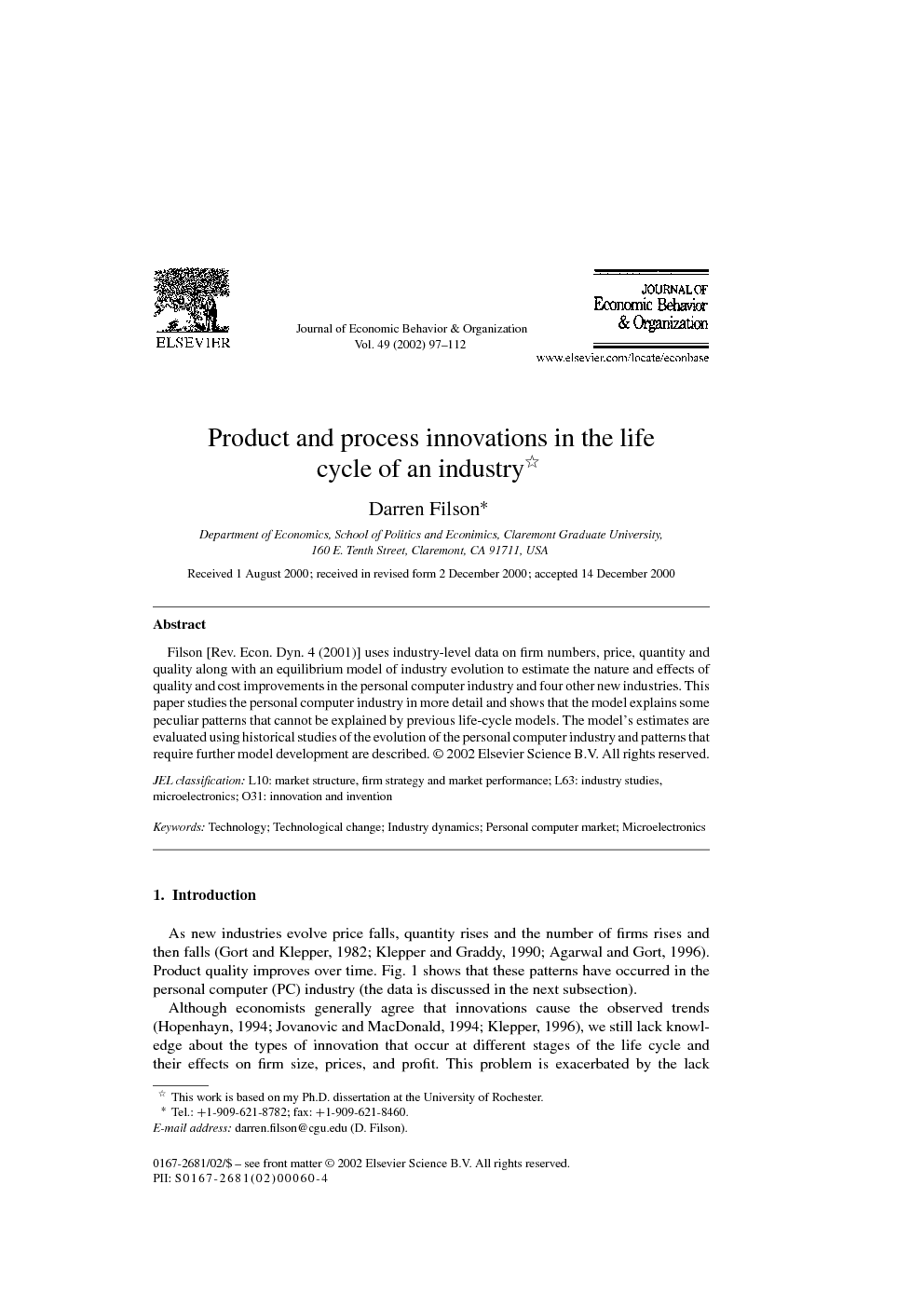 As new industries evolve price falls, quantity rises and the number of firms rises and then falls Gort and Klepper, 1982, Klepper and Graddy, 1990 and Agarwal and Gort, 1996. Product quality improves over time. Fig. 1 shows that these patterns have occurred in the personal computer (PC) industry (the data is discussed in the next subsection). Full-size image (11 K) Fig. 1. Firm number, price, market quantity and quality. Figure options Although economists generally agree that innovations cause the observed trends Hopenhayn, 1994, Jovanovic and MacDonald, 1994 and Klepper, 1996, we still lack knowledge about the types of innovation that occur at different stages of the life cycle and their effects on firm size, prices, and profit. This problem is exacerbated by the lack of useful measures of innovation. Patents are hard to value and not all innovations are patented or documented in trade journals. In particular, cost innovations are often kept secret (Levin et al., 1987). Private companies do not report R&D expenditures and public companies are typically multiproduct firms (IBM, for example), making it difficult to determine R&D expenditures for any particular product.1 Filson (2001) attempts to overcome the measurement problem by using industry-level data on firm numbers, price, quantity and quality along with an equilibrium model of industry evolution to estimate trends in quality, variable costs and fixed costs. The model is estimated using five industries: the early automobile industry, the PC industry, the rigid disk drive industry, the computer monitor industry and the computer printer industry. The estimates for the early automobile industry match conventional wisdom about technological change over the life cycle Utterback and Abernathy, 1975 and Klepper, 1996: the rate of quality improvement is highest early on, the rate of cost improvement is higher later on and firms obtain lower variable costs and higher fixed costs over time. However, the estimates for the modern microelectronics industries depart from this pattern in several ways: the rate of quality improvement does not diminish over time, the rate of cost improvement is not always highest later in the life cycle and while variable and fixed cost tradeoffs tend to occur they do not always involve decreasing variable costs and increasing fixed costs. As the model’s results for the modern microelectronics industries challenge conventional wisdom, this paper attempts to evaluate the model’s results for those industries using a case study of the PC industry. There are two reasons for focusing on the PC industry. First, the PC industry is a particularly good example of an industry that cannot be explained by previous dynamic equilibrium life-cycle models. Jovanovic and MacDonald (1994) and Hopenhayn (1994) limit their attention to variable-cost innovations that increase scale; firm size rises over the life cycle. Fig. 2 shows that average firm size has not continually increased in the PC industry. Further, the estimates presented later suggest that over much of the life cycle large firms were high-quality firms (they produced large quantities because they faced higher prices than other firms), not low-cost producers. Klepper (1996) presents a model with both quality and cost improvements but continues to associate large size with low costs. Further, Klepper assumes that firms receive a constant exogenous payoff from quality improvement that does not vary over time. The profit estimates presented later suggest that the profitability of quality improvement in the PC industry has varied substantially over time, partly because the rate of quality improvement has changed over time.2 Full-size image (7 K) Fig. 2. Average quantity per firm. Figure options The second reason for using the PC industry is that historical analyses of the industry by Langlois (1992) and Steffens (1994) along with information from trade journals allow for a rough test of the model to be performed. The problems with measuring innovation described earlier prevent direct comparisons of the model’s results on technological change with data. However, the historical analyses provide a rich set of anecdotal evidence that can be used to evaluate the model’s results on quality and cost innovation. The lack of information on innovation in the other microelectronics industries (particularly cost innovation) limits the scope of this study. The test of the model focuses on two key sets of results. First, the model’s explanation for the pattern in average firm size shown in Fig. 2 is that the nature of cost innovation changed over the life cycle. The model’s results suggest that cost innovations in the 1970s and late 1980s decreased variable costs and increased fixed costs, which led to larger firms and cost innovations in the mid 1980s decreased fixed costs and increased variable costs, which led to smaller firms. Second, the estimates suggest that the rate of quality improvement was high initially, dropped in the mid 1980s and then rose again in the mid 1990s. Both of these results are consistent with the evidence described in Section 3.1.

The model estimated here extends previous work on industry life cycles by considering quality and variable and fixed cost improvements simultaneously in a flexible framework. The estimation results show that all three components are necessary to explain the evolution of the PC industry and the historical analysis shows that the estimates of technological change generated by the model are consistent with industry facts. Although the model improves on the previous literature, there are still several possible avenues for further improvement. Richer environments with heterogeneous choices deserve further study. The model here has four types of firms, but focuses entirely on leader–follower relationships. In reality many innovations are only pursued and imitated by a subset of firms, successful firms become much larger than new entrants and path-dependence is relevant. Eeckhout and Jovanovic (1998) introduce a model that allows some firms to be persistent imitators. Further, a more complete explanation of innovation in the PC industry requires several additional factors. Steffens (1994) emphasizes different stages in PC industry’s life cycle associated with different standards and modes of competition. Transitions occurred in the nature of the consumers, from hobbyists early on to businesses, educators and households later on. Different types of consumers may value different product characteristics and have different views on what determines high “quality”. For example, hobbyists enjoy assembling PCs themselves and thus do not require a completed product, whereas other users place a high value on not having to build their own PC. Transitions also occurred in the operating systems, from CP/M early on, to Apple’s, Commodore’s and Tandy’s operating systems and then to Microsoft’s. Network effects and brand name effects have been important. It is difficult to evaluate the robustness of the results to the inclusion of network and brand effects. Some facts cannot be explained without network effects; Apple’s persistence and growth is one example. The combination of the model’s results and the historical analysis presented earlier suggest that links between network effects and cost functions have been important. For example, the rise of independent suppliers following IBM’s entry with an open standard allowed clone companies to enter as non-vertically-integrated firms; this lowered fixed costs and led to smaller firms. As another example, the consolidation of Intel and Microsoft’s dominance in the 1980s contributed to the commoditization of the PC. This is captured in the model as an exogenous decline in opportunities for quality improvement and an increase in opportunities for cost reduction, but it would be interesting to endogenize the events. In sum, it would be useful to consider heterogeneous choices, transitions between stages, network effects, brand effects and other sources of persistent market power along with the three types of technological change. However, it should be noted that introducing these factors would complicate the analysis considerably and require additional data. One theoretical issue is that the model here has a unique equilibrium and while such a model is much easier to estimate than multiple-equilibria or evolutionary models (for which we lack data on all paths but the one observed), the latter are required to model network effects.