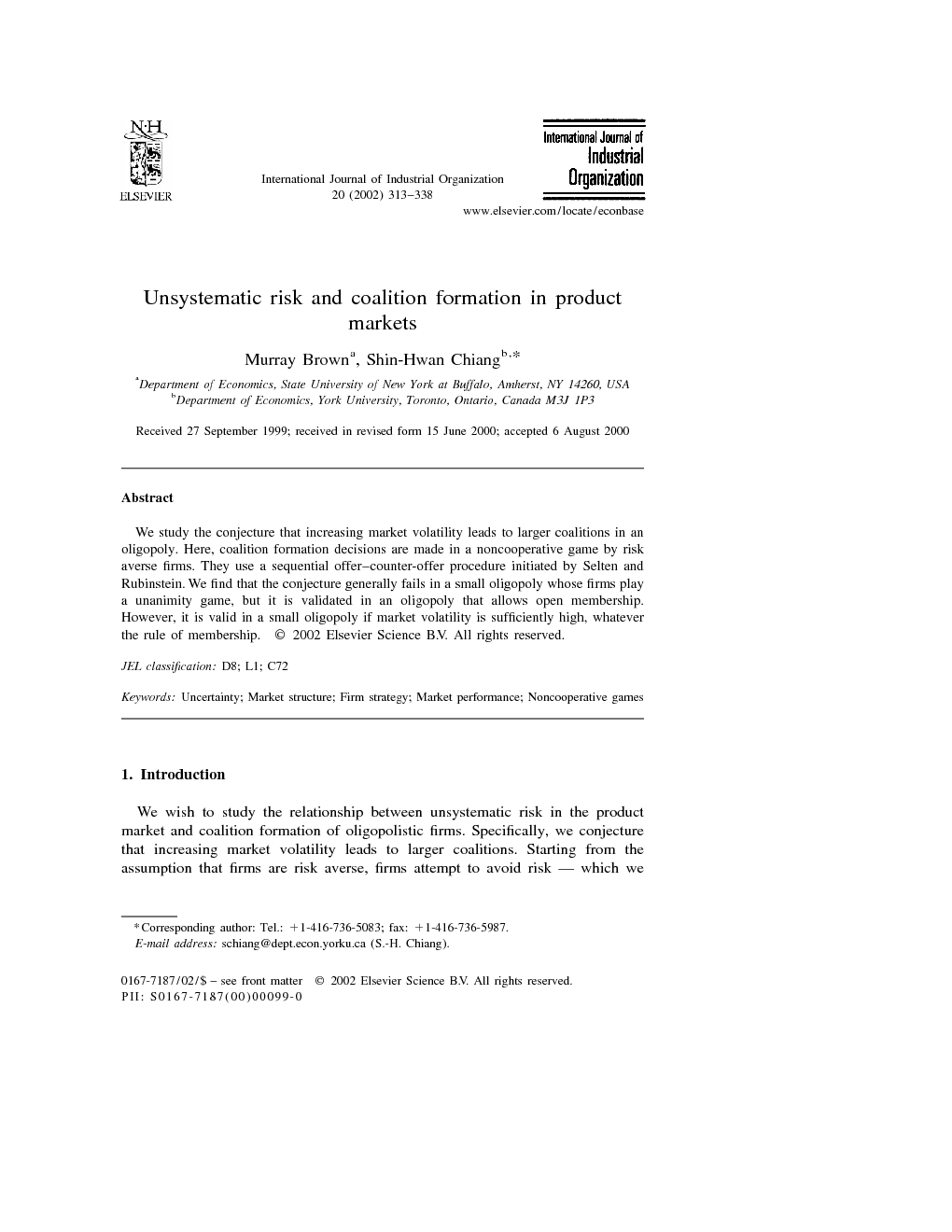 We study the conjecture that increasing market volatility leads to larger coalitions in an oligopoly. Here, coalition formation decisions are made in a noncooperative game by risk averse firms. They use a sequential offer–counter-offer procedure initiated by Selten and Rubinstein. We find that the conjecture generally fails in a small oligopoly whose firms play a unanimity game, but it is validated in an oligopoly that allows open membership. However, it is valid in a small oligopoly if market volatility is sufficiently high, whatever the rule of membership.

Our analysis applies to quantity-setting oligopolistic firms that are risk averse. Accepting this, our conjecture has considerable intuitive appeal. The desire to reduce risk by sharing it is a natural consequence of risk aversion, and coalition formation is a natural way to share risk. Hence, there is considerable force to the conjecture that more market volatility leads to larger coalitions. But the conjecture is not vacuous because it does not hold in all cases. A change in the rule of how a coalition forms, from open membership to a unanimity rule, can invalidate it. Our simple symmetric model suffices both to confirm the conjecture in the open membership rule case and to refute it when unanimity is required for a coalition to form. Though the conjecture does not hold, in general when the unanimity rule applies, neither does it always fail. In fact, the conjecture holds nicely for higher ranges of the market volatility measure. If the variance of demand increases from a level in a middle range to a higher level, coalition size increases, no matter what the rule. It only fails when the market volatility is sufficiently low and proceeds to a middle range. Considerable volatility is required to overcome coalition-destroying factors in unanimity based coalitions — the principal factor being the Stigler effect, which is the desire by firms to remain outside coalitions in order to free ride on the price rise effected by the increase in the monopoly power of a coalition. In sum, if market volatility starts at a low level and proceeds to a moderate level, do not expect a general increase in coalition size. But if it is sufficiently large, coalition size rises with market volatility, independently of the coalition-forming rule. Our analysis rests on a complete information model and the assumption that uncertainty resides in the demand for the products. Whether the results hold for asymmetric information concerning demand uncertainty or cost uncertainty, this relaxation of the complete information assumption in its several directions remains to be pursued. Also, the paper raises immediate caveats concerning the assumptions that firms compete in quantities and that marginal costs are constant. Clearly, these have to be relaxed. It remains an open question whether our results can be extended to the decreasing marginal cost case, and especially to the subcase where only a Bertrand equilibrium can be obtained. We add that with regard to the latter, there is a need to examine coalition formation within Bertrand price-setting oligopolies. These are worthy subjects for future research.