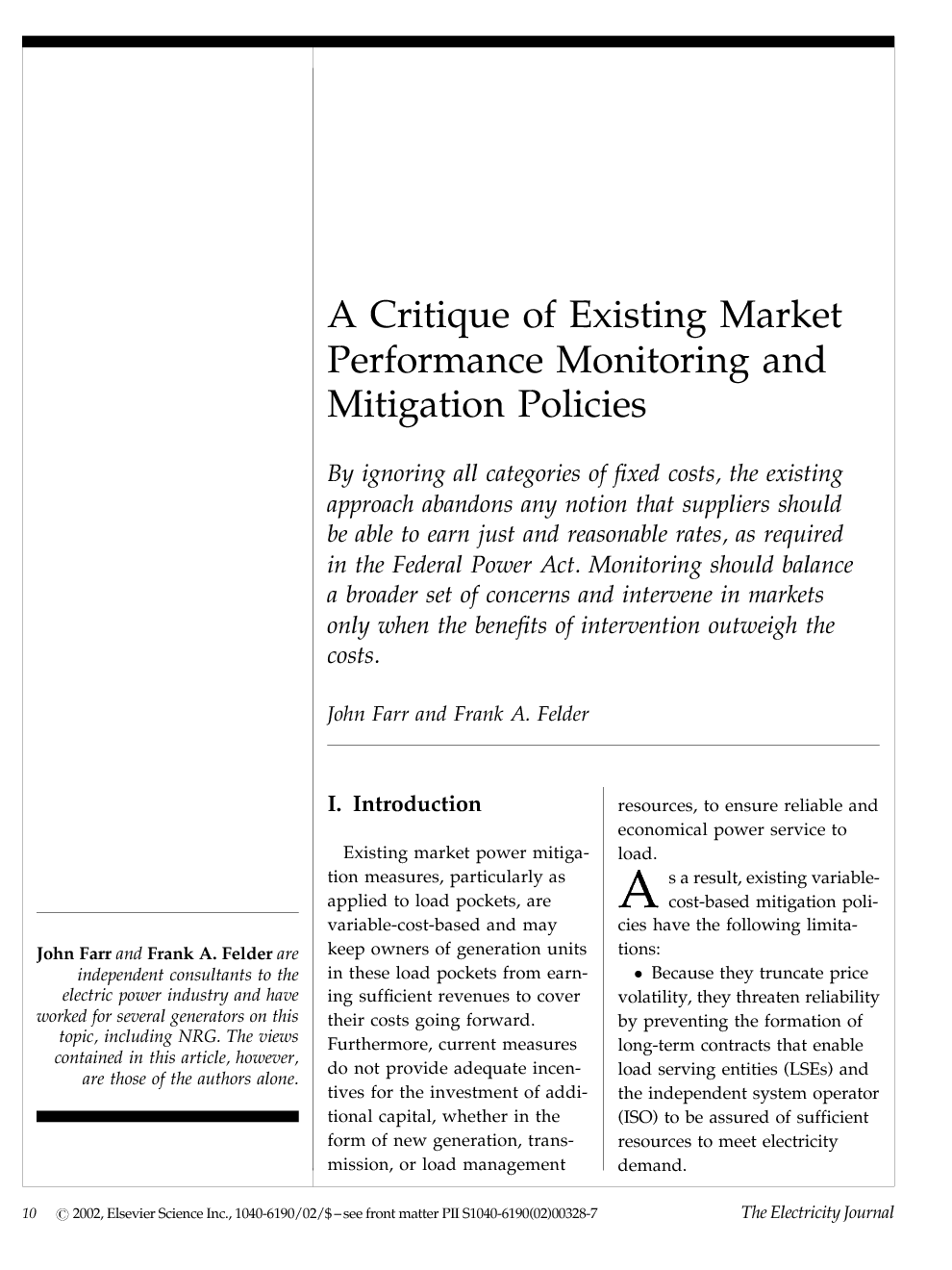 By ignoring all categories of fixed costs, the existing approach abandons any notion that suppliers should be able to earn just and reasonable rates, as required in the Federal Power Act. Monitoring should balance a broader set of concerns and intervene in markets only when the benefits of intervention outweigh the costs.

Existing market power mitigation measures, particularly as applied to load pockets, are variable-cost-based and may keep owners of generation units in these load pockets from earning sufficient revenues to cover their costs going forward. Furthermore, current measures do not provide adequate incentives for the investment of additional capital, whether in the form of new generation, transmission, or load management resources, to ensure reliable and economical power service to load. As a result, existing variable-cost-based mitigation policies have the following limitations: • Because they truncate price volatility, they threaten reliability by preventing the formation of long-term contracts that enable load serving entities (LSEs) and the independent system operator (ISO) to be assured of sufficient resources to meet electricity demand. • They result in the ISO and generation owners incurring substantial transaction costs to administer and litigate these policies, as well as costs incurred due to the inefficiencies introduced into the market from this policy intervention. • They require the ISO to provide sources of additional revenue beyond the variable-cost-based policies in order for generation units to continue to operate. • They do not foster additional competition to ensure that the ISO is procuring the most efficient resources to meet reliability needs. This policy paper proposes replacing the existing variable-cost mitigation policy with one that is market-based. The objectives of this proposal are to: maintain and attract sufficient capacity to protect power system reliability; allow the power system to perform in a manner consistent with workable competition, including the opportunity for generators to earn legitimate scarcity rents without resulting in a market meltdown; and be transparent and manageable from an administrative point of view. After critiquing the existing variable-cost-based mitigation policies, we recommend a market-based mitigation proposal with the following key elements for markets that have mandatory capacity markets: • An overall soft bid cap of $1,000/MWh applies to all generation units in a market. • Market-based mitigation measures that apply to generation units in well-defined load pockets during a transition period, and only when load pocket conditions exist. • For generation units outside load pockets, no other mitigation measures are imposed (except for the $1,000/MWh bid cap). • A transition period that is long enough for the ISO or LSEs to procure from a competitive market the resources necessary to meet their load pocket needs. II. Economic and Policy Framework and Objectives for Developing a Market Performance Monitoring and Mitigation Policy (MPMMP) A. Framework: the tradeoff between imperfect competition and imperfect regulation Neither competition nor regulation will produce perfectly efficient outcomes. Inherent in either approach are inefficiencies caused by poor or uninformed decision-making, inefficient pricing of services, and other factors. Broadly stated, the introduction of competition into the electric generation industry stemmed from a belief that competitive generation markets, on balance, could provide generation services in a more efficient and desirable manner, producing both cost savings for consumers and new opportunities for competitive firms to profit through the generation and marketing of electricity. The success or failure of competition, therefore, should not be judged by comparing the performance of competitive generation markets to some theoretical ideal. Real generation markets are imperfect instruments better judged through comparison to regulated markets and all the imperfections that such regulated markets entail. The decision to move to competition provides powerful evidence of those imperfections. Regulatory failures widely cited include: • Wasteful expenditures on ill-conceived generation investments for which consumers were (and largely still are) obliged to pay. • The added costs associated with regulatory processes. • Lack of innovation in generation services. This tradeoff between the costs of regulation and the costs of competition must be kept in mind when formulating and evaluating MPMMP. An appropriate policy should make a comparison between competition and regulation, both of them in practice—not to theoretically perfect outcomes that will not result under either approach. Therefore, market performance monitoring and mitigation should be based not on the need to detect market imperfections, but to detect when imperfections are significant enough to warrant the reintroduction of some form of market regulation. More precisely, MPMMP should indicate intervention only at the point that such intervention can reasonably be expected to produce an outcome superior to competition. Intervention in the markets undertaken as part of MPMMP entails considerable costs and risks. Most notably, MPMMP that results in frequent interventions in the market may undermine competition by making markets less attractive and impeding entry into the market. Simply put, competitive markets must be attractive enough to attract competition. Overly aggressive intervention is likely to undermine competition and may create conditions where the exercise of market power is more likely to be severe and will significantly undermine market performance. Potential investors may find markets unattractive if interventions are undertaken even when evidence of the exercise of market power is not clear or does not indicate substantial impacts on market performance. Interventions are likely to be especially damaging to competition in conditions where the incentives to invest are already marginal—for example, when the expected return on potential projects is not clearly above the levels needed to justify taking the risks associated with investment.