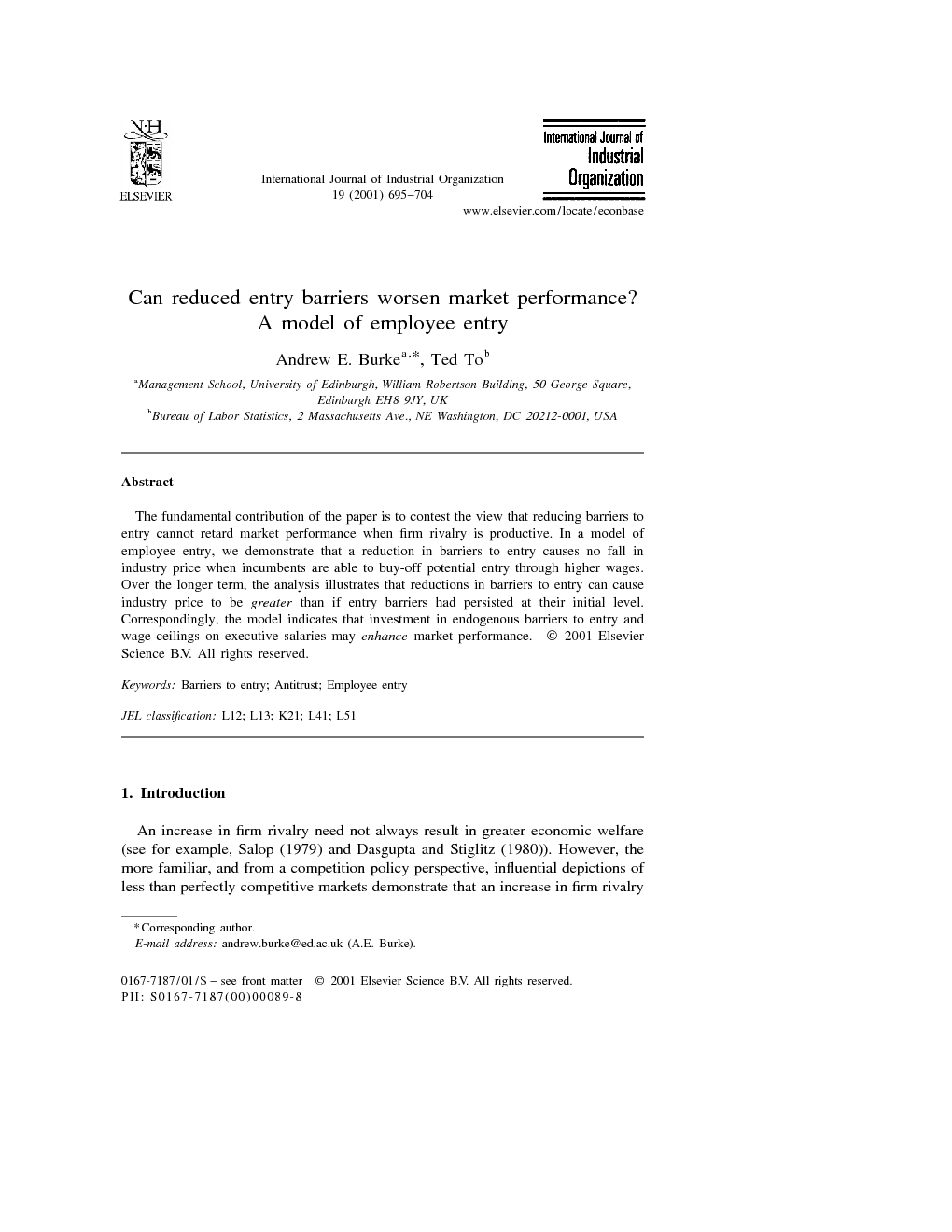 An increase in firm rivalry need not always result in greater economic welfare (see for example, Salop (1979) and Dasgupta and Stiglitz (1980)). However, the more familiar, and from a competition policy perspective, influential depictions of less than perfectly competitive markets demonstrate that an increase in firm rivalry can enhance both competitiveness and economic welfare. In these markets, it is held that reductions in barriers to entry and exit to an industry cannot retard market performance. In other words, a reduction in barriers to entry is either expected to cause a fall in market price or at the very least have no effect. This perspective has led to a competition policy ‘rule of thumb’ where a reduction in barriers to entry is currently perceived as one of the main objectives (rather than as a means) of competition policy. In this paper we demonstrate that consideration of the dynamic entry process as endogenous raises doubts about this conclusion. We argue that reductions in barriers to entry may retard market performance in markets where increased firm rivalry enhances market performance. We, therefore, advise against a ‘rule of thumb’ approach to the regulation of barriers to entry. In a model where an incumbent’s employees pose the only threat of entry, reductions in barriers to entry may result in increased salaries rather than an increase in actual entry. We show that, in the short run, reductions in barriers to entry may result in higher salaries and no entry. Over a longer time period reductions in barriers to entry may cause firms to limit the number of their employees in the knowledge that the subsequent threat of entry will translate into increased salaries. In this case reductions in barriers to entry cause higher prices and lower output. In other words, they retard market performance. The basic intuition behind our result rests on the concept that production technology and entrepreneurial ideas are knowledge which may be disseminated through employment.1 Specifically, an incumbent’s employees often constitute the most credible potential entrants, having a detailed knowledge of the production technology, and both output and factor markets. This may be particularly true of employees (most likely senior executives) who have sufficient entrepreneurial ability and capital to be credible entrants and competitors to an incumbent. The analysis is likely to be relevant to client-oriented and technology-led industries where certain employees acquire specific human capital2 through employment, where this human capital is necessary for market entry and is transferable to other firms. For example, in the technology-led sector, the launch of Real Networks Inc., which competes with the Microsoft Media Player, was instigated by Rob Glaser, a former executive of Microsoft. Recently, Microsoft has suffered further losses in senior management and in response have increased executives’ benefits (Buckman, 2000). Similarly, in the mobile phone industry former employees of Nokia, Ericsson and Motorola set up the British company Sendo, in competition with their previous employers (van Grinsven, 2000). It is also notable that a common practice among SMEs frequently involves offering share options to key employees; particularly those who have established a good reputation and relationship with clients. In these cases we argue that entrepreneurial employees are likely to be highly paid. Thus, incumbents can reduce the threat of entry if most potential entrants are their own employees. A form of rent seeking emerges under which employees, who are also potential entrants, are offered a share of any monopoly profits as an incentive not to enter the market. This leads us to expect a negative relationship between labor costs and barriers to entry and exit. Recognizing this, low entry barriers may induce an incumbent to curtail the number of its employees (the scale of prospective entry), hence reducing output. Thus low entry barriers may cause an inefficient initial labor hiring decision, resulting in higher prices. The analysis also contributes to our understanding of endogenous barriers to entry. Investment in the creation of barriers to entry is usually attributed in the literature to a desire to create monopolistic power. In other words, it enables firms to charge monopolistic prices. In this paper we link barriers to entry to labor costs and thereby offer a further reason why firms may raise barriers to entry — simply, they may do so to reduce labor costs. This incentive is an increasing function of the number of employees hired. Moreover, where reductions in labor costs can improve market performance, the model indicates that some economic welfare benefits can offset the undesirable consequences of endogenous barriers to entry. Furthermore, because liquidity constraints can act as an impediment to entry, reductions in liquidity constraints can have effects analogous to reductions in barriers to entry. The model, therefore, shows that enhanced ease of entry resulting from financial support for firm start-up may lead to poorer market performance. Throughout the paper it is apparent that competition policy objectives could be facilitated by wage ceilings on executive salaries. In most countries the jurisdiction of competition law does not extend to the labor market. Thus, such an initiative would require a change in the law. Clearly, the analysis supplements previous research on the welfare cost of excessive executive salaries by suggesting that such salaries may also reduce outputs and raise product prices.

In the paper we analyzed the effect of a reduction in barriers to entry and exit in a market where firm rivalry is productive and the supply of potential entrants is treated as an endogenous variable. In a model of Cournot competition where employees pose the only threat of potential entry we demonstrated that a reduction in barriers to entry (an increased threat of entry) caused no reduction in industry price when incumbents were able to buy-off potential entry through higher wages. Over the longer term, the analysis demonstrated that an increased threat of entry could cause equilibrium industry price to be higher than that which would have occurred if entry barriers had been left at their initial higher level. The fundamental purpose of the paper was to question the generic presumption that reductions in barriers to entry cannot have negative effects on performance in markets where firm rivalry is productive. With many commonly used models of imperfect competition, reductions in barriers to entry are perceived as having a non-negative effect on market performance — actual entry causes firms to behave more competitively and potential entry may have similar effects (e.g., Baumol et al., 1982). This viewpoint continues to be highly influential in the formulation and practice of competition policy. It has been used by antitrust regulators to pursue a generic policy of ‘barrier to entry busting’. In the paper we demonstrated that barriers to entry may enhance market performance and therefore, suggest a more discerning regulatory approach towards entry barriers. This seems particularly relevant for business sectors (such as hi-tech or client oriented) where employees (usually the highly skilled) can acquire the specialized human capital necessary for market entry. Similarly, the model raises questions about current generic conclusions about the welfare effects of endogenous barriers to entry and liquidity constraints. It also raises the question of whether executive salaries should become a competition policy issue.