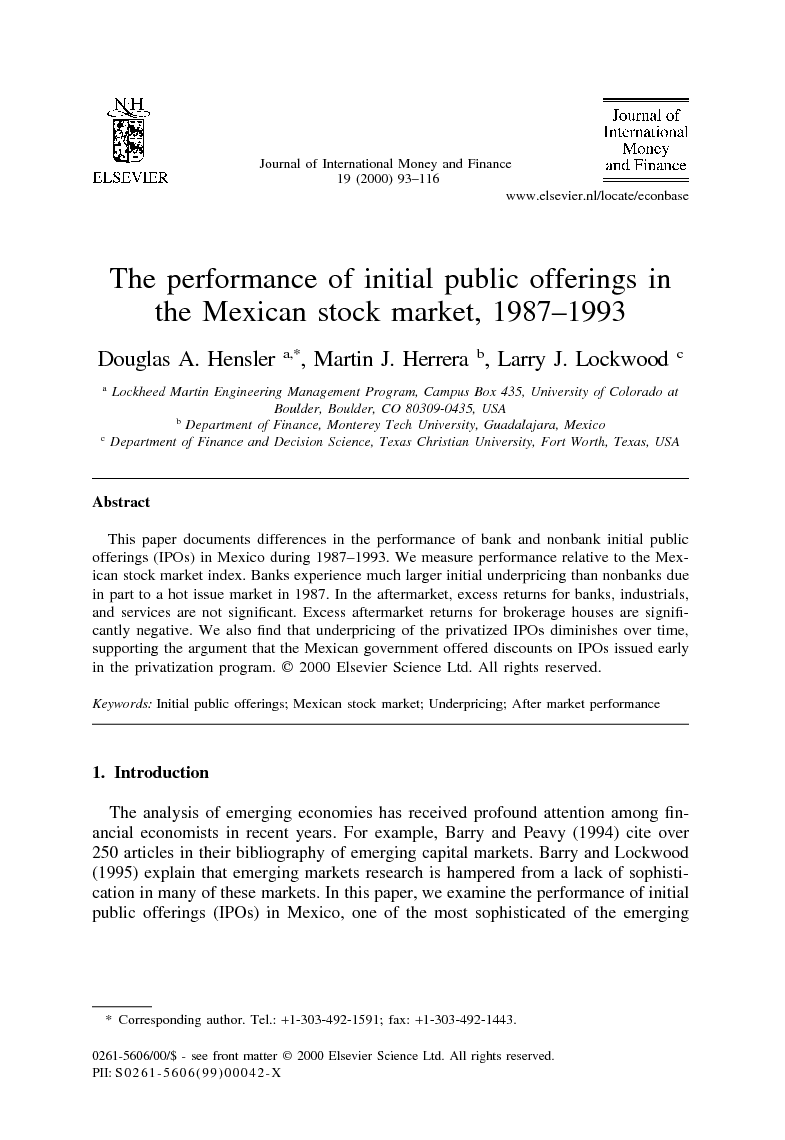 This paper documents differences in the performance of bank and nonbank initial public offerings (IPOs) in Mexico during 1987–1993. We measure performance relative to the Mexican stock market index. Banks experience much larger initial underpricing than nonbanks due in part to a hot issue market in 1987. In the aftermarket, excess returns for banks, industrials, and services are not significant. Excess aftermarket returns for brokerage houses are significantly negative. We also find that underpricing of the privatized IPOs diminishes over time, supporting the argument that the Mexican government offered discounts on IPOs issued early in the privatization program.

The analysis of emerging economies has received profound attention among financial economists in recent years. For example, Barry and Peavy (1994) cite over 250 articles in their bibliography of emerging capital markets. Barry and Lockwood (1995) explain that emerging markets research is hampered from a lack of sophistication in many of these markets. In this paper, we examine the performance of initial public offerings (IPOs) in Mexico, one of the most sophisticated of the emerging markets (see Price, 1994).1 We examine all Mexican IPOs during 1987–1993 using daily stock prices, measuring performance of IPOs relative to the IPC (Indice de Precios y Cotizaciones) market index. Tests of performance are reported separately for bank, brokerage house, industrial firm, and service firm IPOs. Results differ substantially across bank, brokerage house, industrial, and service IPOs in the Mexican market. Bank IPOs experience significantly better initial performance than nonbanks. In the period after the offer date (the aftermarket), bank, industrial, and service sector IPOs produce insignificant excess returns. Aftermarket excess returns for brokerage house IPOs, however, are significantly negative. The data also indicate that a hot issue market existed in 1987. Of the 68 firms in the sample, 12 of 14 banks, 10 of 21 brokerage houses, and 10 of 33 industrial/service firms were issued in 1987.2 We find that the initial excess return for IPOs issued in 1987 was substantially greater than the initial excess return for IPOs issued in subsequent years. The remainder of this paper consists of four sections. The next section briefly discusses the IPO process in Mexico. Section 3 discusses the data and methodology. Section 4 presents the results. Section 5 provides summarizing and concluding comments.

This paper documents the performance of IPOs in the Mexican stock market. Performance is measured relative to the IPC Mexican stock market index. The results highlight several significant findings. First, we show that performance of bank, brokerage, industrial, and service IPOs vary markedly. Banks experience much larger initial underpricing than nonbanks. For the aftermarket period, which excludes the first day of trading, we show that banks, industrial, and service IPO stocks match the benchmark returns. Brokerage houses, however, experience huge losses in the aftermarket period. We also argue that there is little likelihood that Mexican issuers suffer litigation risk for poor aftermarket performance. Thus, the strong initial performance for Mexican IPOs suggests that litigation avoidance is unlikely to be the sole determinant of IPO underpricing in markets characterized by strong due diligence laws. The initial returns for Mexican bank IPOs are much higher than the initial returns reported by Ritter (1991) for U.S. bank IPOs and higher than those shown in other studies of international IPOs. The aftermarket performance of Mexican bank IPOs, however, is similar to the aftermarket performance of U.S. banks reported by Ritter (1991) over the same time period. The initial and aftermarket performance of Mexican brokerage IPOs match closely the performance documented for U.S. IPOs. Mexican industrial/service IPOs appear to behave more as one might expect in an efficient market. After the positive first day performance, the longer term performance is insignificant. This result may suggest that Mexican industrial/service IPOs are more correctly priced when compared to their U.S. counterparts. Second, we show that longer-term performance, which includes the first day return, remains significantly positive for Mexican bank IPOs, but turns significantly negative for Mexican brokerage IPOs. Third, we show that the Mexican privatization program yielded high initial returns early in the program especially for bank IPOs during 1987. The initial returns for firms privatized later in the sample period are far below those of firms privatized early in the sample. This evidence provides support for the arguments of Perotti and Guney (1993) who studied privatization efforts in the UK, France, Spain, Chile, Nigeria, Turkey, Malaysia, Poland, Hungary, and Czechoslovakia. They argued that governments must build investor confidence by retaining a significant portion of the firm and by purposely underpricing. Deliberate underpricing can be viewed as a discount to initial investors for assisting the government in privatizing the firm under conditions of policy risk. Results of cross-sectional tests that integrate various alternative propositions indicate that initial performance for Mexican IPOs during the 1987–1992 was driven by both a bank privatization and hot period effect in 1987. The tests also show that IPOs issued after 1987 perform poorly relative to the IPC market index in longer-term and aftermarket periods. In contrast, banks privatized in 1987 perform significantly better than the remainder of the sample in both the longer-term and aftermarket periods.