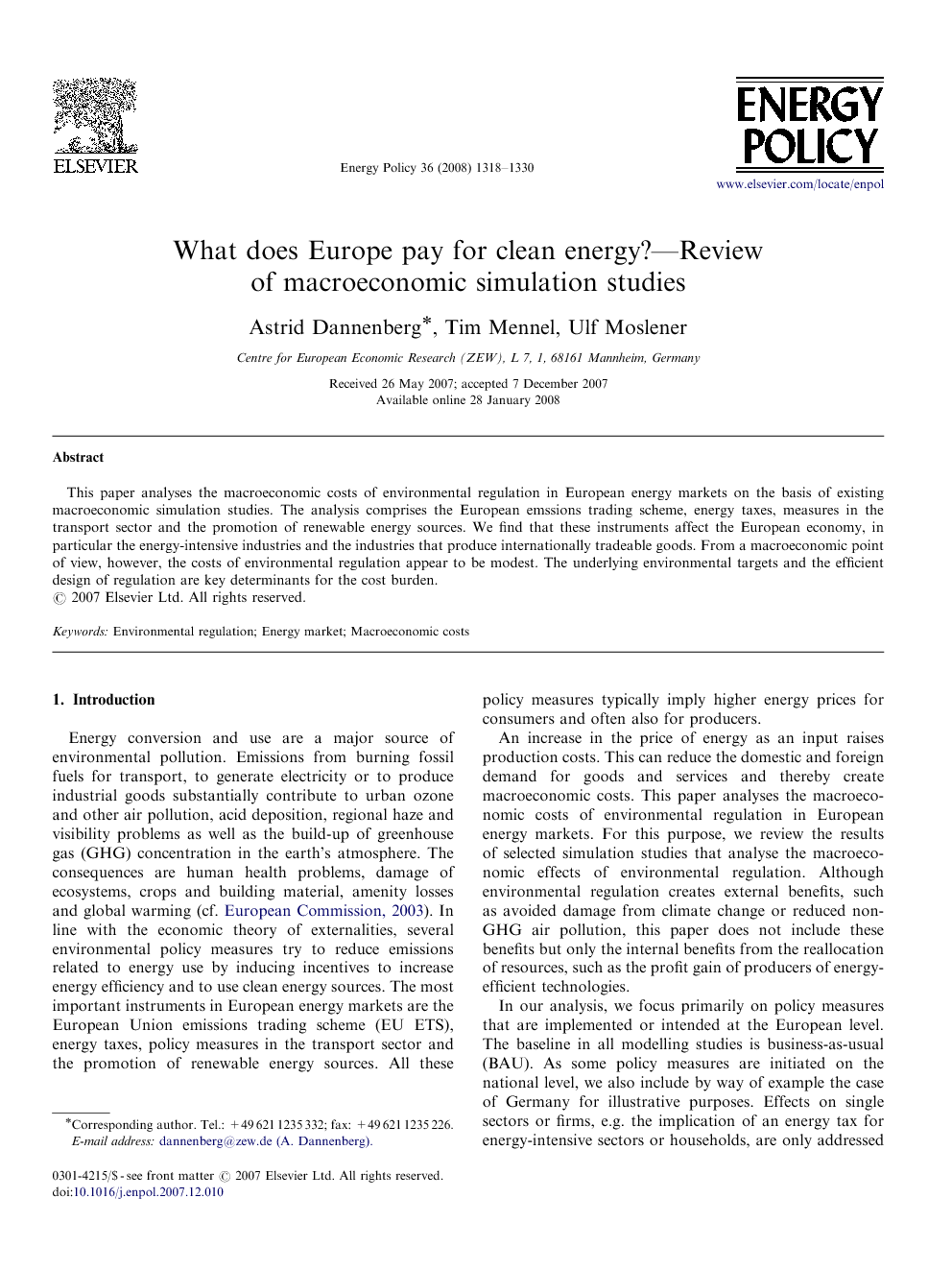 This paper analyses the macroeconomic costs of environmental regulation in European energy markets on the basis of existing macroeconomic simulation studies. The analysis comprises the European emssions trading scheme, energy taxes, measures in the transport sector and the promotion of renewable energy sources. We find that these instruments affect the European economy, in particular the energy-intensive industries and the industries that produce internationally tradeable goods. From a macroeconomic point of view, however, the costs of environmental regulation appear to be modest. The underlying environmental targets and the efficient design of regulation are key determinants for the cost burden.

Energy conversion and use are a major source of environmental pollution. Emissions from burning fossil fuels for transport, to generate electricity or to produce industrial goods substantially contribute to urban ozone and other air pollution, acid deposition, regional haze and visibility problems as well as the build-up of greenhouse gas (GHG) concentration in the earth's atmosphere. The consequences are human health problems, damage of ecosystems, crops and building material, amenity losses and global warming (cf. European Commission, 2003). In line with the economic theory of externalities, several environmental policy measures try to reduce emissions related to energy use by inducing incentives to increase energy efficiency and to use clean energy sources. The most important instruments in European energy markets are the European Union emissions trading scheme (EU ETS), energy taxes, policy measures in the transport sector and the promotion of renewable energy sources. All these policy measures typically imply higher energy prices for consumers and often also for producers. An increase in the price of energy as an input raises production costs. This can reduce the domestic and foreign demand for goods and services and thereby create macroeconomic costs. This paper analyses the macroeconomic costs of environmental regulation in European energy markets. For this purpose, we review the results of selected simulation studies that analyse the macroeconomic effects of environmental regulation. Although environmental regulation creates external benefits, such as avoided damage from climate change or reduced non-GHG air pollution, this paper does not include these benefits but only the internal benefits from the reallocation of resources, such as the profit gain of producers of energy-efficient technologies. In our analysis, we focus primarily on policy measures that are implemented or intended at the European level. The baseline in all modelling studies is business-as-usual (BAU). As some policy measures are initiated on the national level, we also include by way of example the case of Germany for illustrative purposes. Effects on single sectors or firms, e.g. the implication of an energy tax for energy-intensive sectors or households, are only addressed within the macroeconomic framework. However, due to differences in energy intensity and possibilities to substitute energy-intensive technologies by more efficient technologies, the costs of environmental regulation can differ substantially between countries, sectors and firms. Higher energy prices reduce the profitability of energy-intensive companies, whereas producers of energy-efficient technologies may benefit. As the macroeconomic costs subsume all these effects they are usually smaller than the costs in specific sectors, such as electricity or energy-intensive manufacturing. Generally speaking, the results presented in this review show that the macroeconomic costs of the European environmental policy as of today are fairly limited, i.e. usually below 1% of GDP. Eco-taxes even engender macroeconomic gains by way of double-dividend effects. The results for Germany are fully in line with the results for the EU as a whole.