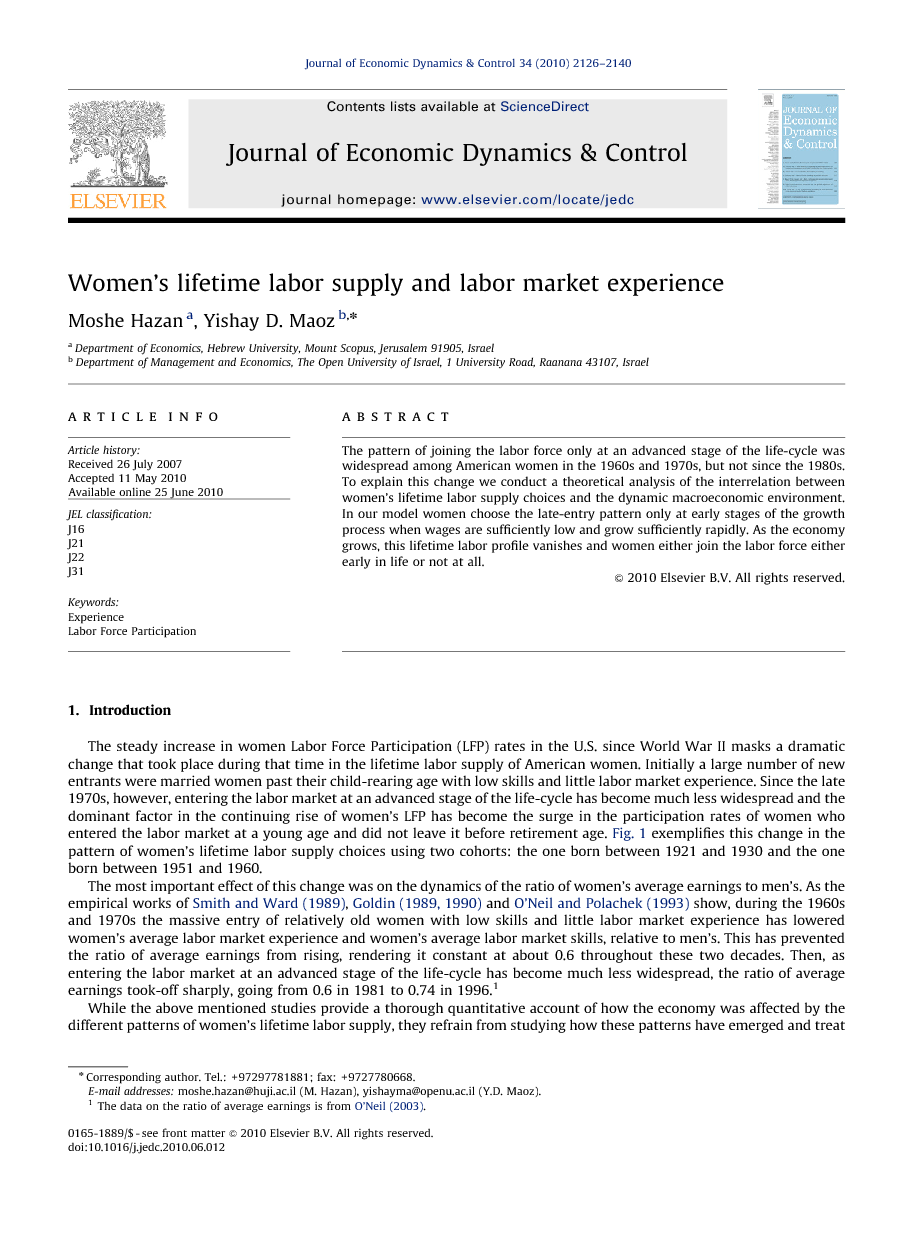 The pattern of joining the labor force only at an advanced stage of the life-cycle was widespread among American women in the 1960s and 1970s, but not since the 1980s. To explain this change we conduct a theoretical analysis of the interrelation between women’s lifetime labor supply choices and the dynamic macroeconomic environment. In our model women choose the late-entry pattern only at early stages of the growth process when wages are sufficiently low and grow sufficiently rapidly. As the economy grows, this lifetime labor profile vanishes and women either join the labor force either early in life or not at all.

In this paper we have studied the considerations underlying women’s choices of a lifetime labor profile and have embedded the analysis within a dynamic macroeconomic framework. Our focus has been on the labor profile in which a woman enters the labor market only in a relatively late stage of her life with little labor market experience after avoiding the labor market in the earlier stage of her life. We have found that this labor profile is chosen during the early stages of the growth process, because then wages are sufficiently low and grow sufficiently rapidly. Later, as wages become higher and their growth rate declines, this labor profile become less common until it completely vanishes. This dynamic pattern fits the U.S. women LFP of the post World War II era. For simplicity, we have assumed that productivity at home is constant. Greenwood et al. (2005) and Albanesi and Olivetti (2007) have shown that time-saving technological improvements in home production play an important role in explaining female LFP dynamics in the past century in the U.S. Incorporating such progress in home production in our model requires replacing the assumption that individuals either works at home or in the market in each period by the assumption that in each period individuals optimally allocate part of their time to home production and the rest to LFP. Such technological improvements in home production should have the same positive effect on individuals LFP decision as an increase in wages. Finally, based on the women LFP data in Kaoet al. (1994), Bauer (2001), Okunishi (2001), and Pissarides et al. (2005), we hypothesize that our model also fits the growth in employment in several East Asian and European countries. However, since to the best of our knowledge, a formal analysis along the lines of Smith and Ward (1989), Goldin, 1989 and Goldin, 1990 and O’Neil and Polachek (1993) has not been conducted, neither for Asian countries, not for European countries, we can only speculate on the fit of our model to these countries.10