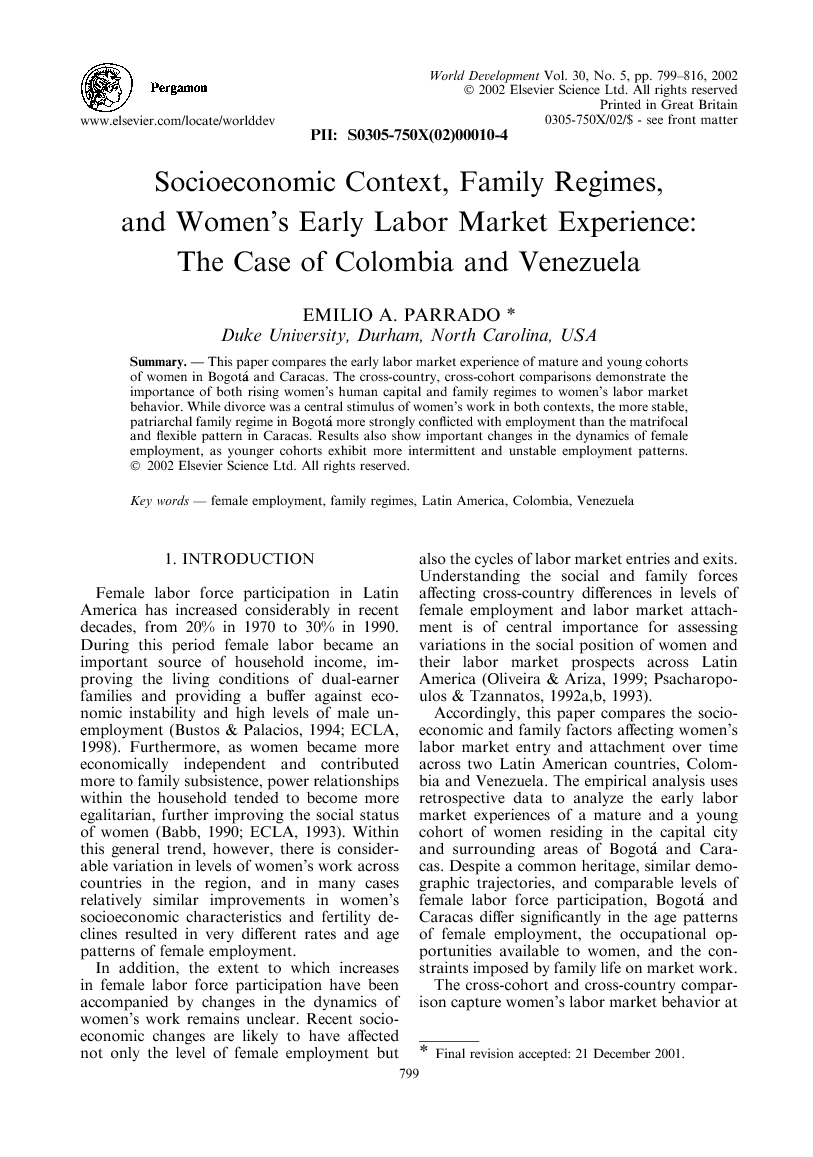 This paper compares the early labor market experience of mature and young cohorts of women in Bogotá and Caracas. The cross-country, cross-cohort comparisons demonstrate the importance of both rising women's human capital and family regimes to women's labor market behavior. While divorce was a central stimulus of women's work in both contexts, the more stable, patriarchal family regime in Bogotá more strongly conflicted with employment than the matrifocal and flexible pattern in Caracas. Results also show important changes in the dynamics of female employment, as younger cohorts exhibit more intermittent and unstable employment patterns.

Female labor force participation in Latin America has increased considerably in recent decades, from 20% in 1970 to 30% in 1990. During this period female labor became an important source of household income, improving the living conditions of dual-earner families and providing a buffer against economic instability and high levels of male unemployment (Bustos & Palacios, 1994; ECLA, 1998). Furthermore, as women became more economically independent and contributed more to family subsistence, power relationships within the household tended to become more egalitarian, further improving the social status of women (Babb, 1990; ECLA, 1993). Within this general trend, however, there is considerable variation in levels of women's work across countries in the region, and in many cases relatively similar improvements in women's socioeconomic characteristics and fertility declines resulted in very different rates and age patterns of female employment. In addition, the extent to which increases in female labor force participation have been accompanied by changes in the dynamics of women's work remains unclear. Recent socioeconomic changes are likely to have affected not only the level of female employment but also the cycles of labor market entries and exits. Understanding the social and family forces affecting cross-country differences in levels of female employment and labor market attachment is of central importance for assessing variations in the social position of women and their labor market prospects across Latin America (Oliveira & Ariza, 1999; Psacharopoulos and Tzannatos, 1992a, Psacharopoulos and Tzannatos, 1992b and Psacharopoulos and Tzannatos, 1993). Accordingly, this paper compares the socioeconomic and family factors affecting women's labor market entry and attachment over time across two Latin American countries, Colombia and Venezuela. The empirical analysis uses retrospective data to analyze the early labor market experiences of a mature and a young cohort of women residing in the capital city and surrounding areas of Bogotá and Caracas. Despite a common heritage, similar demographic trajectories, and comparable levels of female labor force participation, Bogotá and Caracas differ significantly in the age patterns of female employment, the occupational opportunities available to women, and the constraints imposed by family life on market work. The cross-cohort and cross-country comparison capture women's labor market behavior at two points in time and under different socioeconomic and family contexts. The mature and young cohorts in Bogotá and Caracas were roughly 20 years old in the 1960s and late 1980s, respectively, and represent employment behavior before and after a period of rapid and profound socioeconomic and demographic change. In addition, the two metropolitan areas represent very different family regimes. Caracas more closely resembles the flexible and unstable family structure prevalent in Caribbean societies, while Bogotá approximates the traditional patriarchal family structure typical of the rest of Spanish speaking South America (Barrow, 1996; Parrado & Tienda, 1997; Rosero-Bixby, 1996). The very different socioeconomic conditions represented by the two cohorts and the distinct family regimes of Bogotá and Caracas present an ideal setting to assess the socioeconomic and family conditions affecting women's work in Latin America. The empirical analysis is divided into two parts. The first part analyzes the decision to enter the labor market for the first time. The main objective of this analysis is to evaluate how rapid socioeconomic changes affected patterns of female labor market incorporation in Bogotá and Caracas. This entails determining the extent to which compositional changes in women's human capital and family characteristics explain cohort differences in employment entry, and also the extent to which the relationship between human capital and family characteristics and women's work changed across cohorts. The second part of the article extends the analysis of labor market incorporation by examining the degree of labor force attachment across cohorts and countries. The main objective of this analysis is to identify the social and family factors behind women's decisions to remain in, exit, and reenter the labor market. Once again, this entails examining both compositional changes among women over time, and evaluating whether and how the impact of socioeconomic and family factors changed across cohorts.

While female labor force participation has increased in all of Latin America, there is considerable variation in patterns and dynamics of women's work across countries in the region. Moreover, the extent to which increases in female employment rates have been accompanied by changes in the degree of women's labor market attachment remains unclear. This study contributes to the understanding of differences in the social and family factors affecting female employment in Latin America by comparing labor market incorporation and attachment across two cohorts of Colombian and Venezuelan women. The analysis formulates a dynamic model of female labor force participation that follows women as they enter the labor market and as they remain or exit the labor force over time. Results show that improvements in women's human capital characteristics were a central impetus behind increases in women's work. In both Bogotá and Caracas, women with relatively high levels of education were more likely to work than women with lower levels of education. Compositional changes within the population in favor of more educated groups resulted in higher rates of female employment over time. Educational characteristics were also central in explaining differences in the degree of women's labor market attachment. In both contexts, highly educated women were more likely to remain in the labor force than women with lower levels of education. The magnitude and direction of the effect of education on women's work varied significantly across contexts. In Bogotá, the combination of rapid increases in women's educational attainment and a lack of growth in women's occupational opportunities depressed the labor force participation of highly educated women, lowering their rates of labor market entry and reducing their degree of labor market attachment across cohorts. In Caracas, on the other hand, women's occupational opportunities grew more appreciably over time. This trend was associated with a more linear positive effect of education on labor market entry, and also with a growing degree of labor market attachment among highly educated women across cohorts. A major finding of the study is that even after accounting for women's socioeconomic characteristics, patterns of female employment were highly conditioned by differences in family regimes across Bogotá and Caracas. The more stable, patriarchal family structure in Bogotá posed greater conflicts with the demands of paid employment than the more matrifocal structure prevalent in Caracas. In both cohorts in Bogotá, married women and women with children were much less likely to enter the labor market than their single counterparts and labor market attachment decreased considerably after marriage. In Caracas, on the other hand, the more flexible pattern of family life had a much different effect on labor market behavior. In both cohorts, marriage did not depress labor market entry or attachment to the same degree as in Bogotá. Childbearing, however, did have a negative effect on female employment. In both contexts, divorce was an important stimulus behind labor market entry and the increase in divorce is an important source of changes in female employment over time. Moreover, the relatively higher rate of marital dissolution in Caracas compared to Bogotá appears central to the different employment trajectories of women across family contexts and the much higher rates of female employment after first marriage in Caracas relative to Bogotá. We expected that widening educational and occupational opportunities might have altered the effect of marriage and childbearing on market work across cohorts. Results in this respect are mixed. On the one hand, in both Bogotá and Caracas there was a significant increase in the level of female work across cohorts both before and after marriage. On the other hand, once we account for the increase in level, the early labor market experience of women in relation to marriage changed very little. In Caracas, marriage was only a slight deterrent to labor market entry among the mature cohort. It is therefore not surprising that the negative impact of marriage on employment changed little across cohorts. Yet even in areas where significant change was possible, such as the effect of childbearing on labor market entry or the effect of marriage on labor market attachment, the employment behavior of mature and young women was almost identical. In Bogotá, on the other hand, marriage imposed a much larger impediment to employment among mature women. This effect was significantly attenuated across cohorts, but again, the negative effect of childbearing on labor market entry remained strong. While previous studies have documented the growth of women's employment in Latin America, lack of longitudinal data have prevented a better understanding of changes in the dynamics of the female labor force. The analysis of employment cycles in Bogotá and Caracas confirms that rising female employment does not occur in a vacuum and that changing socioeconomic conditions increased the degree of homogeneity of the female labor force. In both cities women in the younger cohort exited and reentered the labor market at a higher rate than women in the mature cohort, blurring the line between working and nonworking women. This change has significant consequences for the nature of female work. While increased flexibility might have contributed to the expansion of women's employment rates, the shorter duration of working cycles reduced women's attachment to the labor market. As a result, even though younger cohorts of women exhibited higher rates of labor market entry, their work trajectories are more intermittent. This tendency will not only reduce women's accumulated work experience but will also likely affect their future occupational opportunities and perpetuate earning disparities vis-à-vis men.