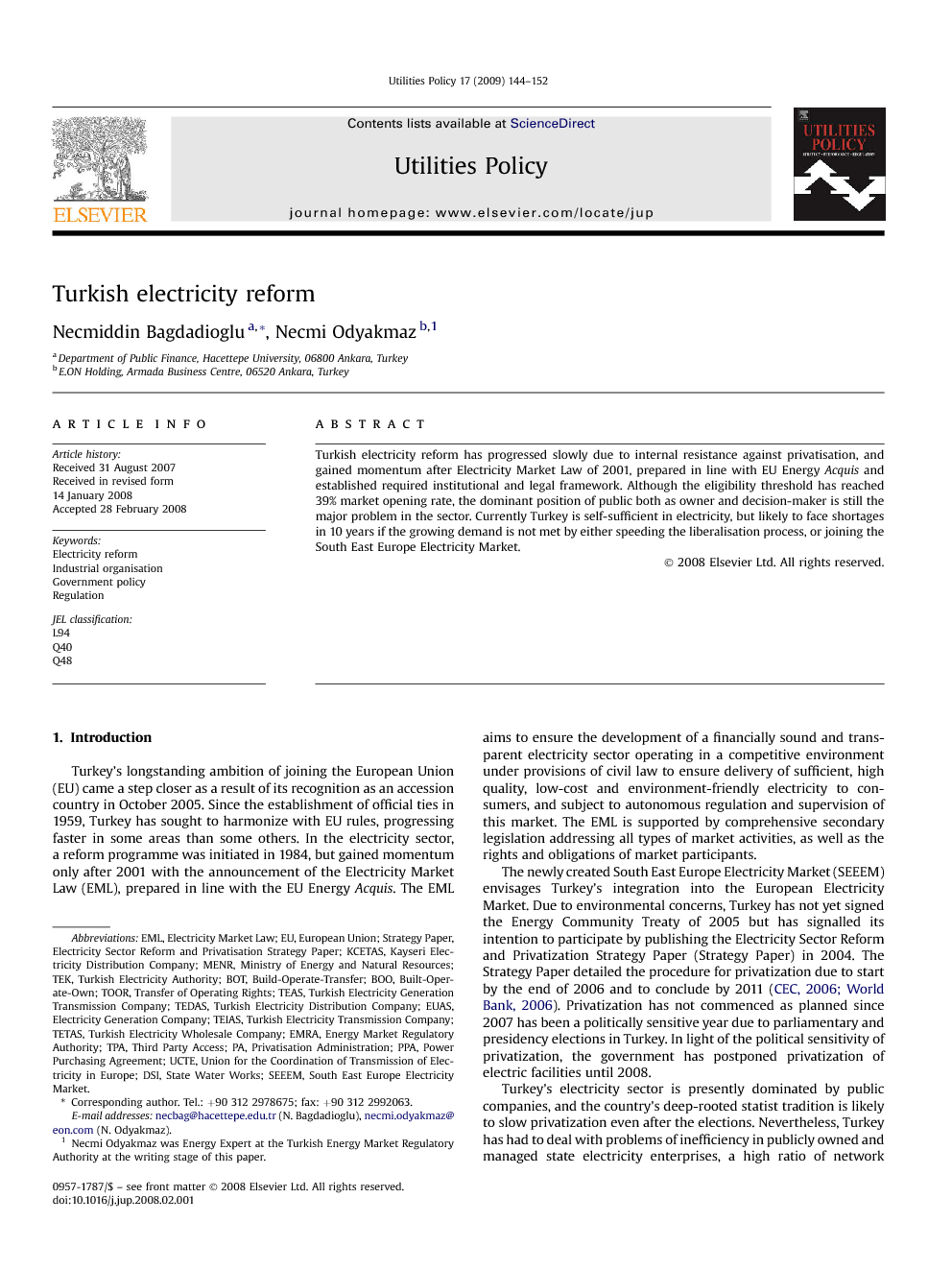 Turkish electricity reform has progressed slowly due to internal resistance against privatisation, and gained momentum after Electricity Market Law of 2001, prepared in line with EU Energy Acquis and established required institutional and legal framework. Although the eligibility threshold has reached 39% market opening rate, the dominant position of public both as owner and decision-maker is still the major problem in the sector. Currently Turkey is self-sufficient in electricity, but likely to face shortages in 10 years if the growing demand is not met by either speeding the liberalisation process, or joining the South East Europe Electricity Market.

Turkey's longstanding ambition of joining the European Union (EU) came a step closer as a result of its recognition as an accession country in October 2005. Since the establishment of official ties in 1959, Turkey has sought to harmonize with EU rules, progressing faster in some areas than some others. In the electricity sector, a reform programme was initiated in 1984, but gained momentum only after 2001 with the announcement of the Electricity Market Law (EML), prepared in line with the EU Energy Acquis. The EML aims to ensure the development of a financially sound and transparent electricity sector operating in a competitive environment under provisions of civil law to ensure delivery of sufficient, high quality, low-cost and environment-friendly electricity to consumers, and subject to autonomous regulation and supervision of this market. The EML is supported by comprehensive secondary legislation addressing all types of market activities, as well as the rights and obligations of market participants. The newly created South East Europe Electricity Market (SEEEM) envisages Turkey's integration into the European Electricity Market. Due to environmental concerns, Turkey has not yet signed the Energy Community Treaty of 2005 but has signalled its intention to participate by publishing the Electricity Sector Reform and Privatization Strategy Paper (Strategy Paper) in 2004. The Strategy Paper detailed the procedure for privatization due to start by the end of 2006 and to conclude by 2011 (CEC, 2006 and World Bank, 2006). Privatization has not commenced as planned since 2007 has been a politically sensitive year due to parliamentary and presidency elections in Turkey. In light of the political sensitivity of privatization, the government has postponed privatization of electric facilities until 2008. Turkey's electricity sector is presently dominated by public companies, and the country's deep-rooted statist tradition is likely to slow privatization even after the elections. Nevertheless, Turkey has had to deal with problems of inefficiency in publicly owned and managed state electricity enterprises, a high ratio of network losses, rapid growth in electricity demand, substantial investment requirements both to expand generation capacity and for the extension of the grid, high maintenance costs of the transmission grid and of generation plant, combined with inadequate public sources of capital for investment. Furthermore, the electricity industry faces a legacy of poor technical and commercial security, low quality, substantial cross-subsidies and external costs, combined with the challenge of compulsory harmonization with EU Acquis, and global energy trends. Turkey has two possible options for reform: either creating its own national electricity market, or joining SEEEM. Turkey is the largest of all the countries in the region both in terms of population (around 73 million) and in terms of the number of accounts. The former option is therefore feasible, but only if internal resistance to privatization and liberalization is surmounted. Not only does Turkey's obligations to the EU require it to take the second course, but this may also help to overcome the internal resistance to reform by opening electricity market to external competition. Turkey, covering 781 000 km2, is located at the crossroads of energy flows between Asia and Europe,2 making it an important territorial bridge between the growing energy needs of the EU, and the desire of Middle Eastern and Hazarian energy sources to satisfy this demand. Turkey is currently self-sufficient in electricity, but likely to face shortages in the coming decade if electricity demand continues to grow at the current pace of around 10% annually. As other papers of this special issue point out, integration might be a mutually beneficial move, since Turkey can access electricity surpluses likely to emerge in SEEEM. Turkey's historical ties with countries of this region from the time of the Ottoman Empire might help ease integration and trade. In the light of these arguments, this paper assesses the progress of Turkey's electricity reform programme in six sections. Section 2 provides the background to the Turkish electricity sector, Section 3 evaluates Turkey's progress against the benchmarks of reform outlined in Jamasb et al. (2004), Section 4 looks at the recent performance of the sector, Section 5 discusses progress to date and the impact of reforms, and Section 6 offers recommendations and prescriptions for future reform.