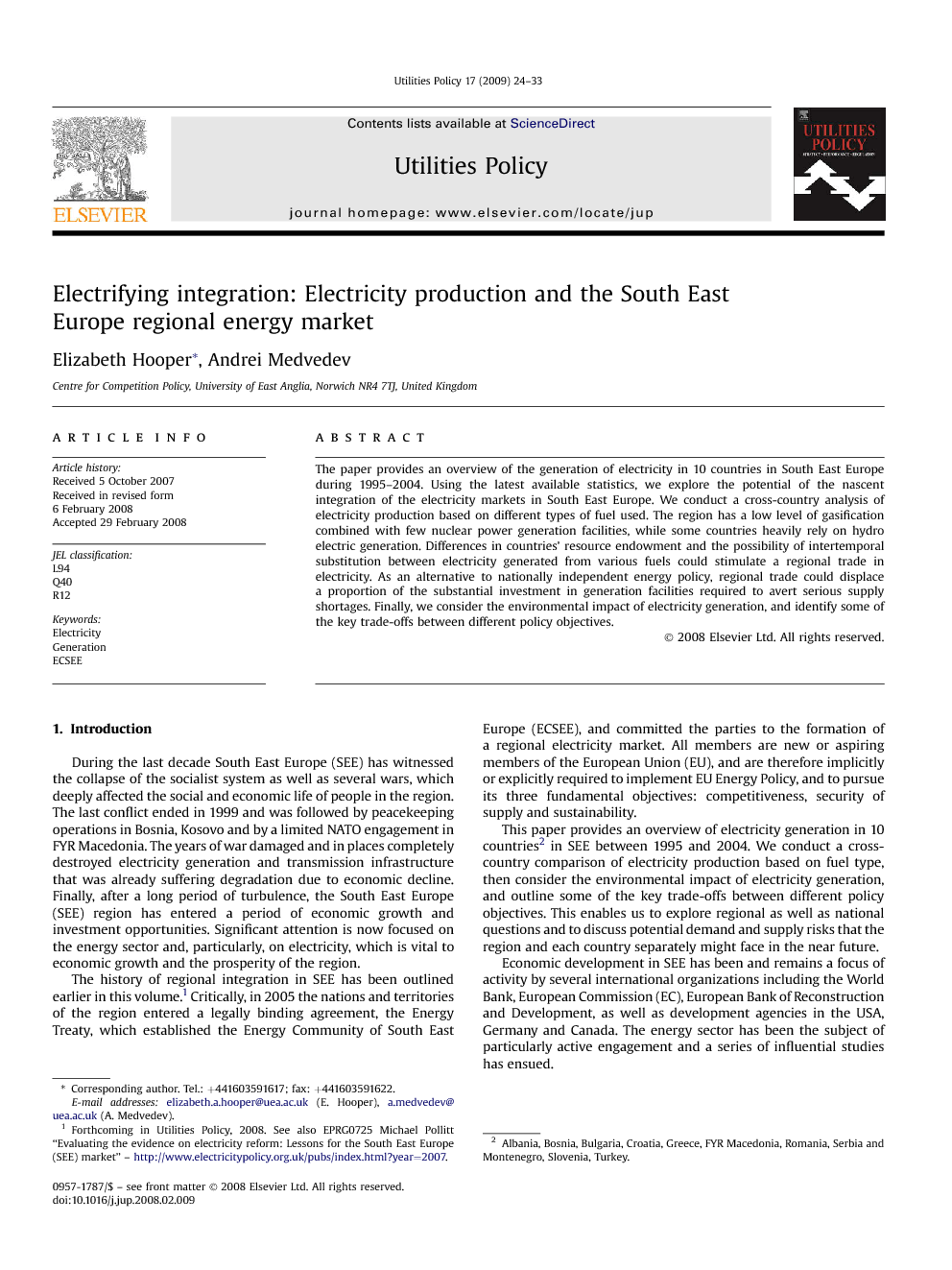 The paper provides an overview of the generation of electricity in 10 countries in South East Europe during 1995–2004. Using the latest available statistics, we explore the potential of the nascent integration of the electricity markets in South East Europe. We conduct a cross-country analysis of electricity production based on different types of fuel used. The region has a low level of gasification combined with few nuclear power generation facilities, while some countries heavily rely on hydro electric generation. Differences in countries' resource endowment and the possibility of intertemporal substitution between electricity generated from various fuels could stimulate a regional trade in electricity. As an alternative to nationally independent energy policy, regional trade could displace a proportion of the substantial investment in generation facilities required to avert serious supply shortages. Finally, we consider the environmental impact of electricity generation, and identify some of the key trade-offs between different policy objectives.

During the last decade South East Europe (SEE) has witnessed the collapse of the socialist system as well as several wars, which deeply affected the social and economic life of people in the region. The last conflict ended in 1999 and was followed by peacekeeping operations in Bosnia, Kosovo and by a limited NATO engagement in FYR Macedonia. The years of war damaged and in places completely destroyed electricity generation and transmission infrastructure that was already suffering degradation due to economic decline. Finally, after a long period of turbulence, the South East Europe (SEE) region has entered a period of economic growth and investment opportunities. Significant attention is now focused on the energy sector and, particularly, on electricity, which is vital to economic growth and the prosperity of the region. The history of regional integration in SEE has been outlined earlier in this volume.1 Critically, in 2005 the nations and territories of the region entered a legally binding agreement, the Energy Treaty, which established the Energy Community of South East Europe (ECSEE), and committed the parties to the formation of a regional electricity market. All members are new or aspiring members of the European Union (EU), and are therefore implicitly or explicitly required to implement EU Energy Policy, and to pursue its three fundamental objectives: competitiveness, security of supply and sustainability. This paper provides an overview of electricity generation in 10 countries2 in SEE between 1995 and 2004. We conduct a cross-country comparison of electricity production based on fuel type, then consider the environmental impact of electricity generation, and outline some of the key trade-offs between different policy objectives. This enables us to explore regional as well as national questions and to discuss potential demand and supply risks that the region and each country separately might face in the near future. Economic development in SEE has been and remains a focus of activity by several international organizations including the World Bank, European Commission (EC), European Bank of Reconstruction and Development, as well as development agencies in the USA, Germany and Canada. The energy sector has been the subject of particularly active engagement and a series of influential studies has ensued. A World Bank working paper by Kennedy and Besant-Jones (2004) sets out the strategy of the Bank with respect to the development of the SEE regional electricity market, focusing on risks the region as a whole might face, and possible ways to deal with them. The South East Europe Generation Investment Study (GIS, 2005) and the subsequent updated version (GIS Update, 2007) present forecasts of demand and generation to 2020 for several plausible scenarios, and from their simulations generate estimates of required investments in electricity infrastructure in the region. The reports cover nine territorial entities: Albania, Bosnia, Bulgaria, Croatia, Kosovo, FYR Macedonia, Montenegro, Romania, and Serbia. Kennedy and Besant-Jones (2004) and GIS (2005) report that there was very limited investment in generation capacity during the 1990s; currently the average age of electricity generation plants is around 30 years. Without significant investment in refurbishment and new plants, and without the improvement of interconnections between countries, the region will become increasingly dependent on imported electricity or even face shortages. Indeed, in late 2005 Tirana, Albania, experienced widespread power cuts of up to 18 h duration due to poor reliability and particularly dry hydrological conditions (Economist, 2006). Academic studies of the restructuring of electricity markets in both developed and developing countries are numerous. Davies et al. (2005) outline various privatization and regulation issues that developing countries may face, with a particular focus on the sequence of reforms. Both Tompson (2004) and Pittman (2007) provide a detailed description of the restructuring of the electricity sector in Russia. Other studies identify useful lessons which could be drawn from the developed countries that recently liberalized, privatized and restructured their electricity sector. Arocena and Waddams (2002) empirically assess differences between state and private electricity generating companies in Spain. Using data on physical units, the authors show that privately owned generating companies are moving faster towards the efficiency frontier. Jamasb (2002) and Jamasb et al. (2005) review different reform experiences in developing countries, and stress the importance of effective institutions in achieving desirable outcomes. In this analysis we used the International Energy Agency (IEA) data on annual national electricity production and consumption for OECD and non-OECD countries for the period of 1995–2004.3 We briefly consider examples of electricity market integration in Europe, and against this background, provide an overview of the rationale for electricity market integration, an exploratory analysis of electricity generation in the region, and consider the potential environmental impact of pursuing a generation expansion plan of the required magnitude to meet demand growth.

Capital investments, market fragmentation, vertical integration, and state ownership are the issues that most of the countries in South East Europe must resolve during the restructuring process. An efficient regional energy market would facilitate meeting peak demand in individual countries, improve the reliability and stability of electricity supply across the region, encourage private investment and match the growing demand for electricity in the long-run. However, each type of fuel bears various risks for customers, energy companies and countries. Dependency on such types of fuel as hydro and thermal electricity could expose countries to physical-supply shortages in a case of unfavorable natural or market conditions. Private investors would prefer transparency and predictability in regulatory and environmental policies when developing nuclear and thermal generation facilities rather than risk additional costs of complying with newly introduced stricter environmental laws. On the demand side, it is common to hear final consumers voicing concerns about price risk that they would bear after the liberalization of the electricity market. This fact could lead to an additional political pressure on politicians and regulators that could result in a halt or even reverse of reforms in the sector. Carefully designed electricity market integration has the potential to address several of the key concerns expressed in contemporary energy policy. The Nordic market suggests that moving from a set of vertically integrated national systems to a regional market is possible, and consumers in that region enjoy among the lowest (but cost-reflective) prices in the EU. But integrating the four systems has taken the best part of a decade to achieve, and was motivated by strategic interests of all the players. Levels of trust between the parties were high and the required trade-offs were judged to be acceptable. By contrast, the motivation for integration in SEE appears to be on the one hand related to aspirations to membership of the EU, and on the other, a growing realization that absent significant investment in generation and transmission capacity, consumers may have to accept regular supply shortages, as experienced in Albania in the last quarter of 2005. While the potential gains from regionalization are significant, and arguably critical to the continued economic development of SEE, so too are the institutional and political challenges posed by market integration. It is not clear how energy policy controlled at a national level but with ‘a regional dimension’ will result in a coherent regional energy policy that reconciles the three objectives of EU energy policy, competitiveness, security of supply and sustainability.