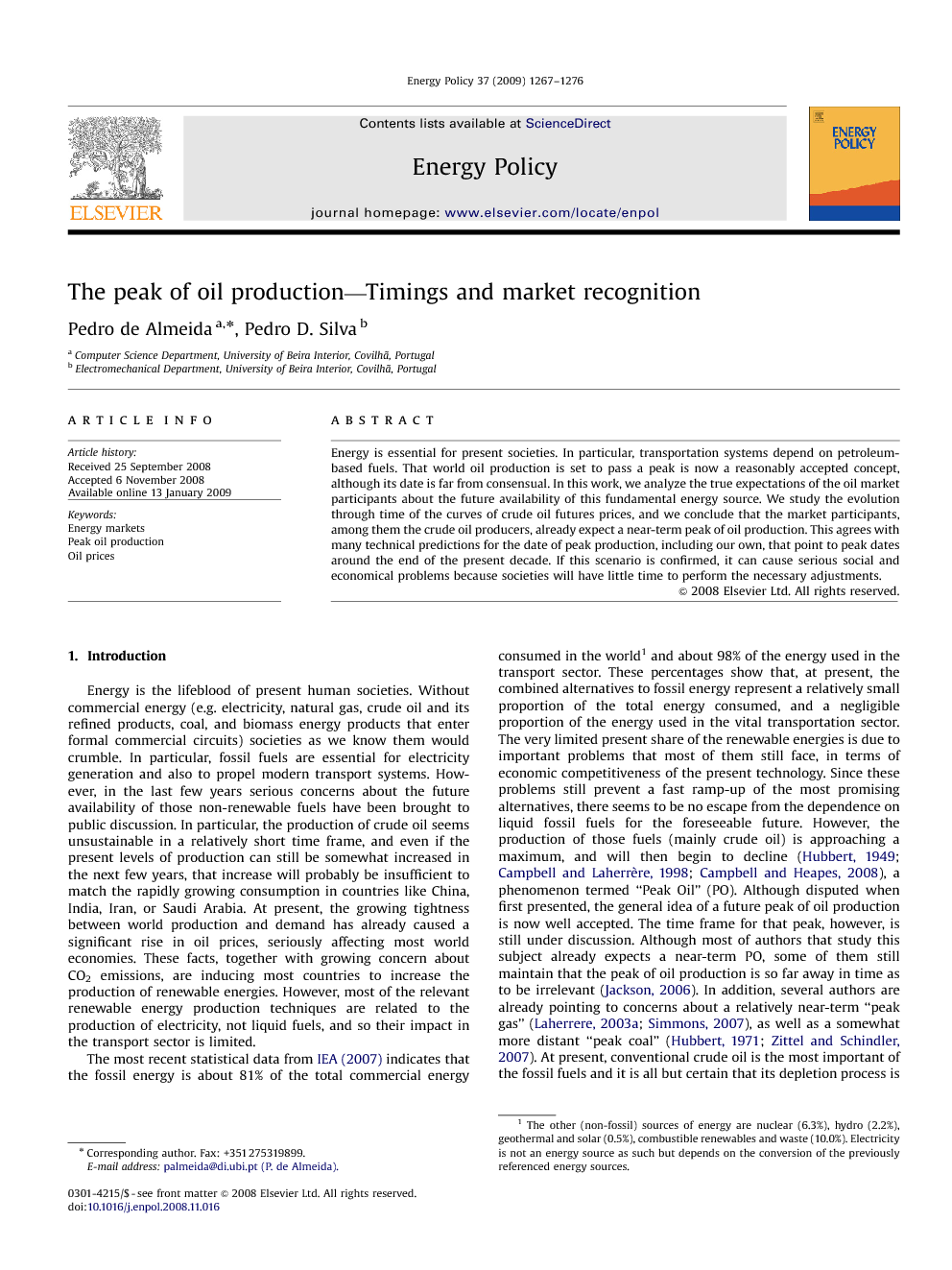 Energy is essential for present societies. In particular, transportation systems depend on petroleum-based fuels. That world oil production is set to pass a peak is now a reasonably accepted concept, although its date is far from consensual. In this work, we analyze the true expectations of the oil market participants about the future availability of this fundamental energy source. We study the evolution through time of the curves of crude oil futures prices, and we conclude that the market participants, among them the crude oil producers, already expect a near-term peak of oil production. This agrees with many technical predictions for the date of peak production, including our own, that point to peak dates around the end of the present decade. If this scenario is confirmed, it can cause serious social and economical problems because societies will have little time to perform the necessary adjustments.

Energy is the lifeblood of present human societies. Without commercial energy (e.g. electricity, natural gas, crude oil and its refined products, coal, and biomass energy products that enter formal commercial circuits) societies as we know them would crumble. In particular, fossil fuels are essential for electricity generation and also to propel modern transport systems. However, in the last few years serious concerns about the future availability of those non-renewable fuels have been brought to public discussion. In particular, the production of crude oil seems unsustainable in a relatively short time frame, and even if the present levels of production can still be somewhat increased in the next few years, that increase will probably be insufficient to match the rapidly growing consumption in countries like China, India, Iran, or Saudi Arabia. At present, the growing tightness between world production and demand has already caused a significant rise in oil prices, seriously affecting most world economies. These facts, together with growing concern about CO2 emissions, are inducing most countries to increase the production of renewable energies. However, most of the relevant renewable energy production techniques are related to the production of electricity, not liquid fuels, and so their impact in the transport sector is limited. The most recent statistical data from IEA (2007) indicates that the fossil energy is about 81% of the total commercial energy consumed in the world1 and about 98% of the energy used in the transport sector. These percentages show that, at present, the combined alternatives to fossil energy represent a relatively small proportion of the total energy consumed, and a negligible proportion of the energy used in the vital transportation sector. The very limited present share of the renewable energies is due to important problems that most of them still face, in terms of economic competitiveness of the present technology. Since these problems still prevent a fast ramp-up of the most promising alternatives, there seems to be no escape from the dependence on liquid fossil fuels for the foreseeable future. However, the production of those fuels (mainly crude oil) is approaching a maximum, and will then begin to decline (Hubbert, 1949; Campbell and Laherrère, 1998; Campbell and Heapes, 2008), a phenomenon termed “Peak Oil” (PO). Although disputed when first presented, the general idea of a future peak of oil production is now well accepted. The time frame for that peak, however, is still under discussion. Although most of authors that study this subject already expects a near-term PO, some of them still maintain that the peak of oil production is so far away in time as to be irrelevant (Jackson, 2006). In addition, several authors are already pointing to concerns about a relatively near-term “peak gas” (Laherrere, 2003a; Simmons, 2007), as well as a somewhat more distant “peak coal” (Hubbert, 1971; Zittel and Schindler, 2007). At present, conventional crude oil is the most important of the fossil fuels and it is all but certain that its depletion process is more advanced. It should be noted that, when talking about the PO problem, the main concern is not the end of oil as an important energy source, but only the peak of its production (and the resulting reduced availability, price increase, and associated economic and social effects). At present, the available data covering the world's oil reserves and the production and depletion rates of most of the oil fields are scarce and uncertain. Inevitably, the various approaches to predict a PO date suffer from this limited information and the resulting estimates developed by different experts tend to show a wide scatter. This uncertainty about the PO date diminishes the sense of urgency that the problem should command. In fact, although several important recent studies (e.g., Hirsch et al., 2005) point to the need of urgent mitigation efforts to limit the economic and social impacts of the PO, it seems clear that many world leaders and government officials are badly informed and that almost no country is acting consistently to implement effective mitigation changes. This pervasive indifference about the PO problem is not just the result of direct ignorance, since it is shared by some individuals and organizations that undoubtedly should be well informed. In fact, mainstream media (e.g., New York Times—see Mouawad, 2007), dedicated information organizations (e.g., IEA and EIA—see IEA, 2006; EIA, 2006), energy consulting firms (e.g., CERA—see Jackson, 2006), and even oil extraction companies (e.g., Exxon—see Tillerson, 2007) and some leaders of countries like Saudi Arabia (Jum’ah, 2007) still try to defend publicly the idea that the PO problem is not very important, or at least that it is not a short-term problem of serious concern. However, these public statements contradict the (growing) majority, among those that study this issue that predicts a relatively near-term PO, and some signal that they may be partially explained by direct marketing concerns. These lingering public “not-a-problem” opinions from organizations related to the oil industry, and the confusion and misunderstandings they still cause, prompted us to try to derive an innovative approach to evaluate the effective beliefs of the participants in the crude oil markets, among which the oil-producing companies are extremely significant. As such, the objective of this paper is to evaluate the evolution of the beliefs (in terms of acknowledgement of the PO problem) of the petroleum market participants, through the analysis of the evolution in time of the crude oil futures price-curves.

The general idea of a future peak of oil production (PO) is now well accepted. The time frame for that peak, however, is still much contested, and there are multiple, and very different, predictions for the date of PO. Nevertheless, most of the relevant published research on this subject points to a significant probability of the PO occurring prior to 2015. In this paper, we tried to validate this relatively early peak using an independent methodology based on the analysis of the evolution in time of the crude oil futures prices curve. We believe that this prices curve is mainly based on the true expectations of the market participants for the future oil prices. Among these market participants are the oil production companies (including both the independent and the national oil companies), the largest fuel oil users (e.g., air transport companies) and specialized funds and individual investors. Almost by definition, those traders of long-term futures are very well informed about the oil production issues. Even departing from the present, relatively high crude oil prices, when compared with the average of its 150 years history, the aggregate of those market participants still expect a continued strength in future prices. In fact, the price strength expected by those well-informed market participants for the next few years clearly demonstrates a progressive acceptance of the reality of a near-term PO, which is in accordance with most of the predicted dates for PO shown in Table 1. Although at present, many of the oil producers still maintain a public denial of near-term production problems, their market actions, as reflected by the futures price curve, contradicts that official public position. We believe that the recent evolution of the NYMEX futures prices for crude oil means that the market participants already agree with the technical predictions that point to the occurrence of peak oil around the beginning of the next decade. Additionally, we believe that this, in itself, constitutes a further validation for a relatively near-term date for peak production. The known analysis about the effects of the PO and about forms of mitigating the ensuing problems (e.g., Hirsch et al., 2005; Bezdek et al., 2006) suggest the necessity of a relatively lengthy adaptation phase during which several efforts must be performed simultaneously (e.g., increasing energy efficiency, developing alternative short-term transitional energy sources, and developing long-term sustainable energy solutions). If the early dates suggested by several important analysts and by our own predictions (both the bottom-up approach and the futures prices analysis) are confirmed, the time available for pre-peak mitigation efforts is already very limited. In fact, we believe that the mere possibility of those peak dates proving real should be enough to mobilize immediate efforts to mitigate the energy crises that will, almost inevitably, result from the peak of the world production of liquid fossil fuels.