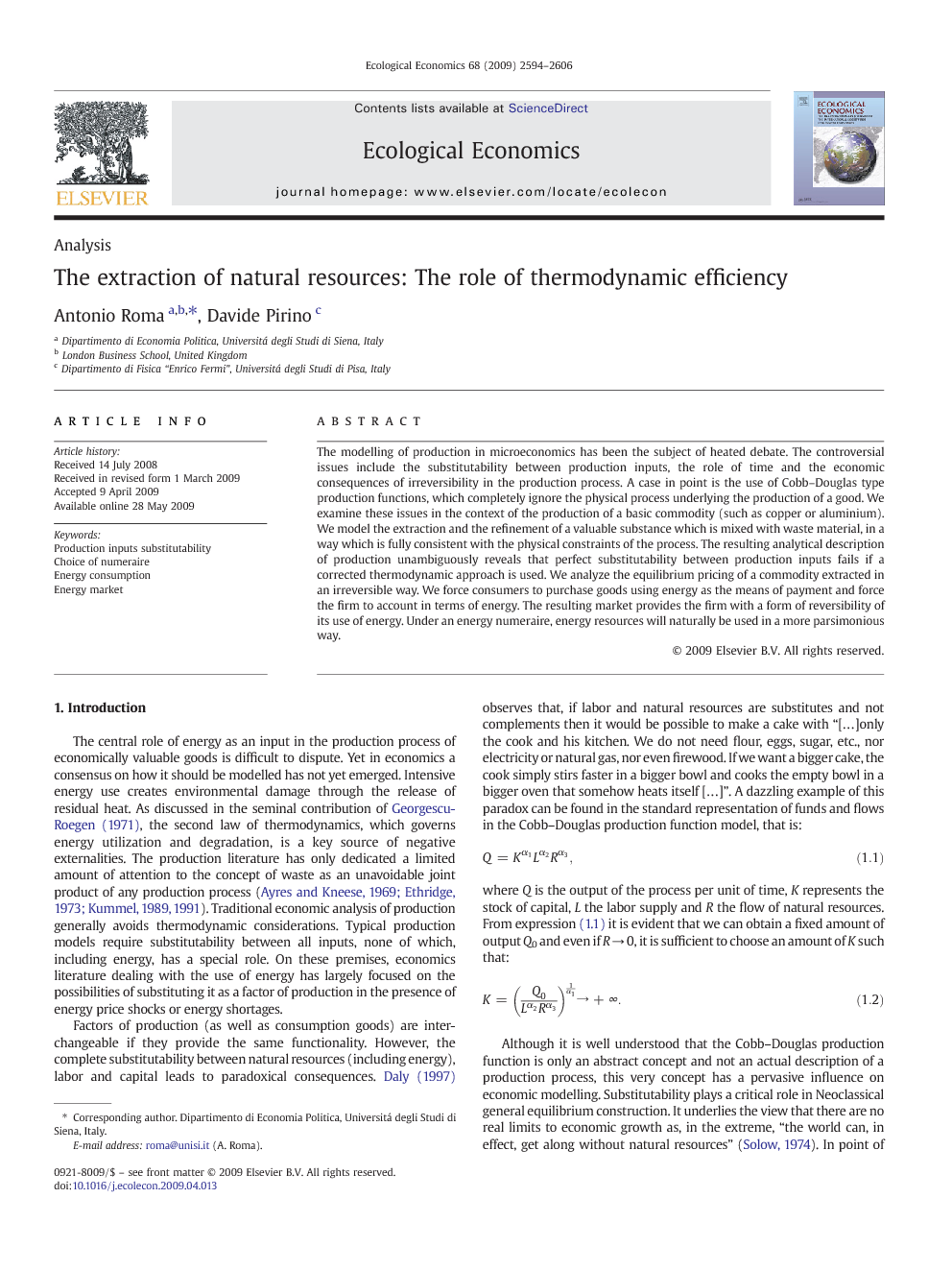 The modelling of production in microeconomics has been the subject of heated debate. The controversial issues include the substitutability between production inputs, the role of time and the economic consequences of irreversibility in the production process. A case in point is the use of Cobb–Douglas type production functions, which completely ignore the physical process underlying the production of a good. We examine these issues in the context of the production of a basic commodity (such as copper or aluminium). We model the extraction and the refinement of a valuable substance which is mixed with waste material, in a way which is fully consistent with the physical constraints of the process. The resulting analytical description of production unambiguously reveals that perfect substitutability between production inputs fails if a corrected thermodynamic approach is used. We analyze the equilibrium pricing of a commodity extracted in an irreversible way. We force consumers to purchase goods using energy as the means of payment and force the firm to account in terms of energy. The resulting market provides the firm with a form of reversibility of its use of energy. Under an energy numeraire, energy resources will naturally be used in a more parsimonious way.

In this paper we have addressed the issue of substitutability between inputs in a production function and, in particular, the existence of a lower bound on the amount of useful energy necessary for production to take place, as in Berry et al. (1978). The hypothesis of perfect substitutability has convenient implications for general equilibrium modelling, but does not plausibly represent many actual production processes. Our methodological approach to providing a clear cut answer to this much debated question is to resort to finite time thermodynamics and model the input requirements for a given production based on physical principles. Economic theory has long drawn on physics, by exploiting the formal analogies between the two fields. This has been particularly fruitful for the development of consumer's theory in pure exchange economies, as discussed by Mirowski (1989). Furthermore, recent advances in pure exchange general equilibrium theory are based on such formal analogies (Smith and Foley, 2008). We believe that there is a lot to be gained by also applying physics to the proper modeling of production. In this realm physics can be applied directly rather than by analogy. In our paper the production process is modelled analytically, following the thermodynamic theory of an irreversible separation process. The physical model confirms the existence of an energy bound below which production is impossible. This prevents full substitutability between factors of production and contradicts the standard Cobb–Douglas representation of production. If we assume, following the view in Ayres and Miller (1980), that the original mixture from which the commodity has to be extracted is a freely available natural resource, while energy is in aggregate scarce, the inputs for every level of production will be combined with fixed coefficients which depend only on the scale of production and the time available for the production process. The derived production function displays increasing marginal cost in terms of energy as long as the process occurs in a finite time. Our assumptions lead to a one-to-one relationship between energy employed and production of the basic commodity considered. We note here that a vast body of literature devoted to the successful estimation of aggregate production, using electric energy as the key explanatory variable, assumes the existence of such a one-to-one relationship (Bodo and Signorini, 1987 and Bodo and Signorini, 1991). This technological description is used within the optimisation problem of a profit-maximising mining operator who produces over two periods and sells the product in a competitive market. We impose that consumers can only purchase the produced good against energy and that the representative firm accounts for its profit in energy terms. Such an arrangement creates an energy market through which the producer can transform its output back into energy. This reverse transformation would otherwise be prevented by the second law of thermodynamics. Energy that cannot be recovered through the energy market will not be spent in production. Contrary to the conclusions of a Neoclassical barter model, the equilibrium allocation will leave some energy unused. This will in turn increase the thermodynamic efficiency of production and decrease entropic waste. In a Neoclassical model with reversible production the energy market would not provide any additional trading opportunity due to the equivalence between goods and energy. Hence its effect on the equilibrium allocation would disappear. We have tried to reconcile the key role of energy, as a scarce non-substitutable resource that underlies thermodynamic optimization in the engineering literature, with economic optimization in a microeconomic model. Whether our results may be considered a reasonable approximation for what will be obtained in the case of more complex production processes, or possibly an abstraction that may apply to the description of aggregate production in a macroeconomic sense, should be the subject of further research.