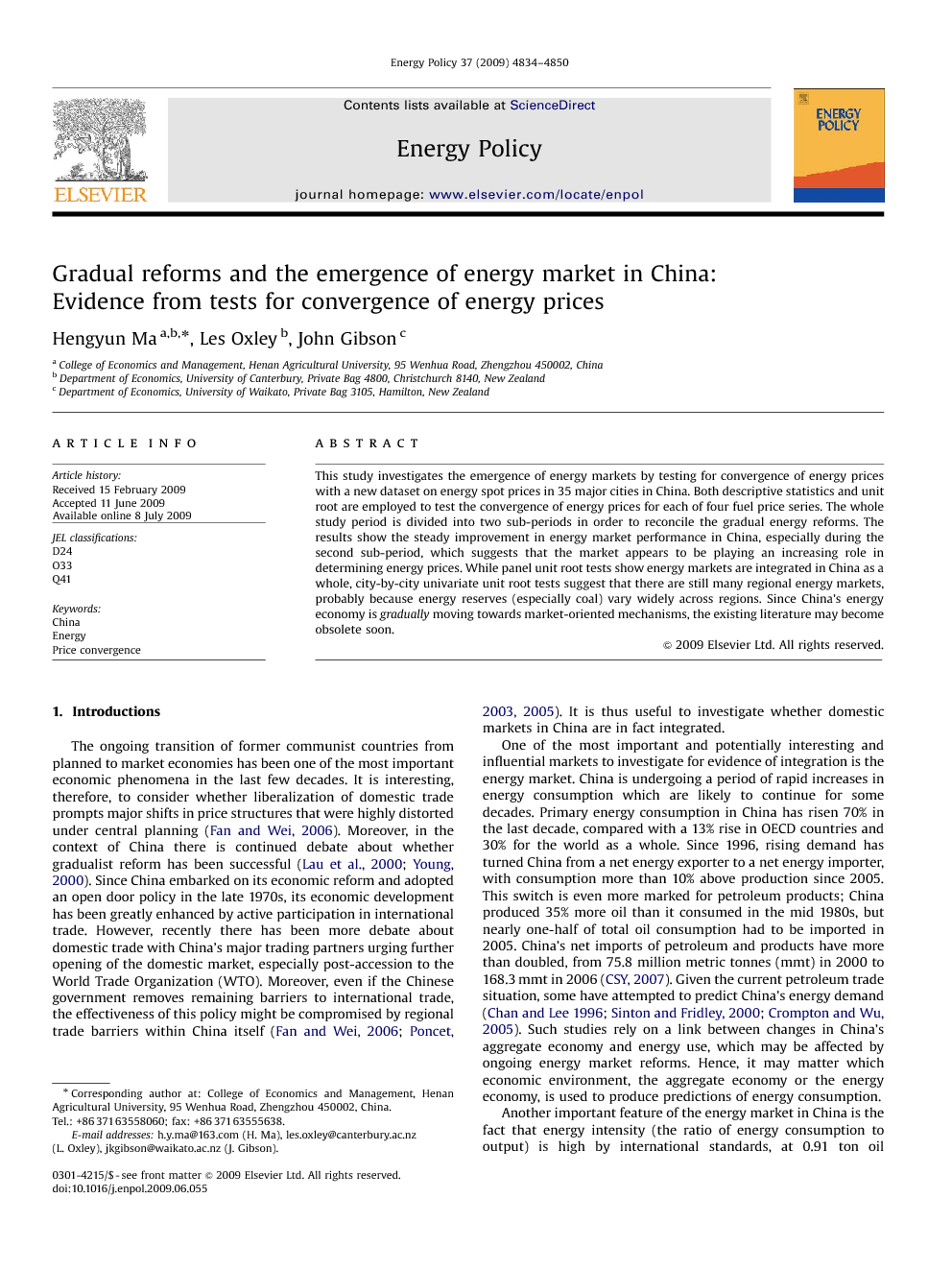 This study investigates the emergence of energy markets by testing for convergence of energy prices with a new dataset on energy spot prices in 35 major cities in China. Both descriptive statistics and unit root are employed to test the convergence of energy prices for each of four fuel price series. The whole study period is divided into two sub-periods in order to reconcile the gradual energy reforms. The results show the steady improvement in energy market performance in China, especially during the second sub-period, which suggests that the market appears to be playing an increasing role in determining energy prices. While panel unit root tests show energy markets are integrated in China as a whole, city-by-city univariate unit root tests suggest that there are still many regional energy markets, probably because energy reserves (especially coal) vary widely across regions. Since China's energy economy is gradually moving towards market-oriented mechanisms, the existing literature may become obsolete soon.

In this study, we have shown, in a number of ways, the steady emergence of energy commodity markets that have occurred in China during the study period. Regardless of whether we use descriptive statistics or more formal techniques, our results are consistent with the emergence of markets for coal, electricity, gasoline and diesel. Moreover, energy markets are robust when viewed across space and time. Although those who visit China are not surprised, such a picture of integrated energy markets may be surprising when juxtaposed against the policy background. Even during the first sub-sample period, China took a gradualist approach to reforming its energy markets. Our results show that despite the gradualist policy, the operation of energy markets have steadily strengthened in China. China's market reforms have really been based on entry-driven competition. In the case of China entry has come from both the dismantlement of the state-own enterprises and the emergence of more energy companies. While this has produced an increase in integration and fall in transaction costs that has been documented in the paper, it is also eroded the power of the state to control the energy markets with traditional command methods. Our results suggest that if policymakers actually want to control energy markets in the future, they need to devise new ways to intervene in the energy sector, otherwise the reforms they have introduced have clearly led to a more market-oriented energy sector. Although we have tested for energy price convergence, our results suggest China's energy economy is still in a state of transition. However, as the market economy is more efficient in resource distribution, one would expect that China's high energy intensity will be affected by energy market reforms despite the fact that other factors still play an important role in improving a firm's performance and reducing energy consumption. This suggests that further energy market reforms can reduce China's energy intensity and in turn energy imports and the impact of China's energy import on the world energy supply and prices. Hence, the former predictions of China's energy demand may need to be reviewed and with cautions. It should be noted that though energy prices are convergent across markets, the market process is apparently different across energy types. The results show that gasoline and diesel are more likely market-oriented than coal and electricity. The price reforms of electricity and coal relevant to electricity generation were late and slow. Therefore, how to speed-up price reforms of electricity and coal relevant electricity generation is a great challenge China has to face. Panel unit root tests demonstrate the convergence of energy prices, however, univariate ADF unit root tests clearly display there are still some regional markets in China for certain types of fuel. This is likely related to the unbalanced distribution of energy reserves, especially for coal. As a result, transportation plays an important role in final user price formation of coal due to huge long-distance transportation cost. Reforms of the transportation sector, therefore, particularly the railway, may become a major determinant in the process of price convergence for coal prices across markets and regions.