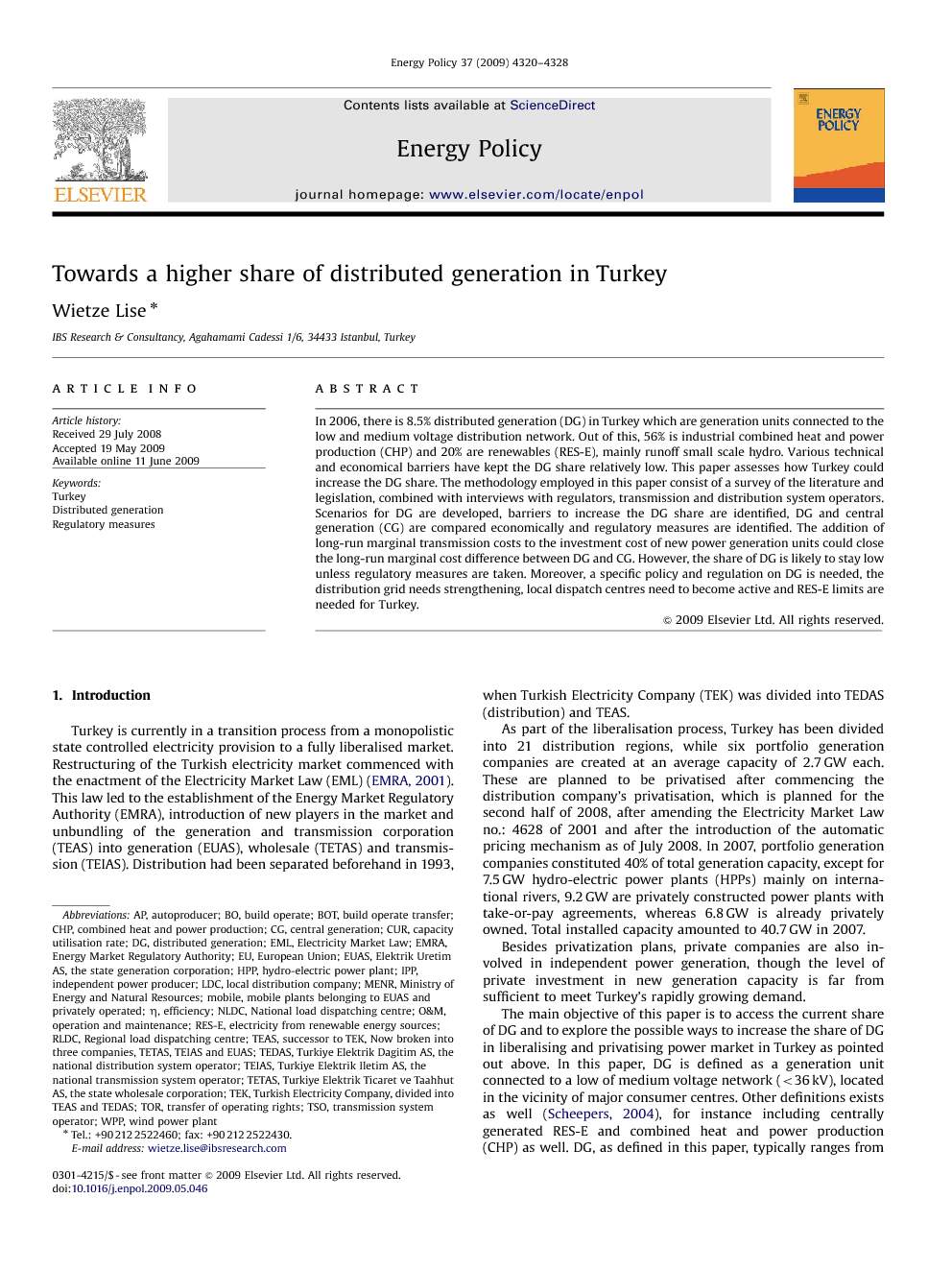 In 2006, there is 8.5% distributed generation (DG) in Turkey which are generation units connected to the low and medium voltage distribution network. Out of this, 56% is industrial combined heat and power production (CHP) and 20% are renewables (RES-E), mainly runoff small scale hydro. Various technical and economical barriers have kept the DG share relatively low. This paper assesses how Turkey could increase the DG share. The methodology employed in this paper consist of a survey of the literature and legislation, combined with interviews with regulators, transmission and distribution system operators. Scenarios for DG are developed, barriers to increase the DG share are identified, DG and central generation (CG) are compared economically and regulatory measures are identified. The addition of long-run marginal transmission costs to the investment cost of new power generation units could close the long-run marginal cost difference between DG and CG. However, the share of DG is likely to stay low unless regulatory measures are taken. Moreover, a specific policy and regulation on DG is needed, the distribution grid needs strengthening, local dispatch centres need to become active and RES-E limits are needed for Turkey.

Turkey is currently in a transition process from a monopolistic state controlled electricity provision to a fully liberalised market. Restructuring of the Turkish electricity market commenced with the enactment of the Electricity Market Law (EML) (EMRA, 2001). This law led to the establishment of the Energy Market Regulatory Authority (EMRA), introduction of new players in the market and unbundling of the generation and transmission corporation (TEAS) into generation (EUAS), wholesale (TETAS) and transmission (TEIAS). Distribution had been separated beforehand in 1993, when Turkish Electricity Company (TEK) was divided into TEDAS (distribution) and TEAS. As part of the liberalisation process, Turkey has been divided into 21 distribution regions, while six portfolio generation companies are created at an average capacity of 2.7 GW each. These are planned to be privatised after commencing the distribution company's privatisation, which is planned for the second half of 2008, after amending the Electricity Market Law no.: 4628 of 2001 and after the introduction of the automatic pricing mechanism as of July 2008. In 2007, portfolio generation companies constituted 40% of total generation capacity, except for 7.5 GW hydro-electric power plants (HPPs) mainly on international rivers, 9.2 GW are privately constructed power plants with take-or-pay agreements, whereas 6.8 GW is already privately owned. Total installed capacity amounted to 40.7 GW in 2007. Besides privatization plans, private companies are also involved in independent power generation, though the level of private investment in new generation capacity is far from sufficient to meet Turkey's rapidly growing demand. The main objective of this paper is to access the current share of DG and to explore the possible ways to increase the share of DG in liberalising and privatising power market in Turkey as pointed out above. In this paper, DG is defined as a generation unit connected to a low of medium voltage network (<36 kV), located in the vicinity of major consumer centres. Other definitions exists as well (Scheepers, 2004), for instance including centrally generated RES-E and combined heat and power production (CHP) as well. DG, as defined in this paper, typically ranges from 1 kW to 50 MW in capacity.1 This contrasts with central generation (CG), which is associated with large 500–3000 MW generating plants that are usually located at a distance from where the energy is consumed.2 The electricity is then transported through the transmission and distribution infrastructure to the customer/user (Solarbuzz, 2006). DG has these advantages: • “DG is attractive, not because it is efficient, but because it avoids transmission costs”. • DG units, which are small in size, can be added to the power system gradually following the gradual demand growth. • DG units can use renewable energy. • Some DG units are only operated during peak demand hours. DG has these disadvantages: • The operation cost of many small units is larger and operation and maintenance (O&M) of DG units is more complicated than central generation units. • Fuel delivery is not always guaranteed, where truck deliveries over a distance of 80 km could add 25% to the fuel costs. • DG technologies are relatively new and “unproven”. • Intermittent DG either needs a match with another source for dispatchability or needs additional protection and control measures (CBO, 2003; Willis and Scott, 2000). The outline of this paper is as follows. The present situation and scenarios of DG will be presented in Section 2. From the collected information, the main technical barriers to increase the share of DG are identified (Section 3), a simple comparative economic analysis between DG and CG is performed (Section 4) and, after identifying the regulatory barriers, regulatory measures for increasing the DG share are suggested (Section 5), whereas the final Section concludes.

The main problem for a large scale integration of DG units is the presence of a top–down balancing mechanism in Turkey. The distribution grid is designed to receive electricity and to pass it on to the consumers. The relatively weak distribution grid does not expect local production and is not ready to return the generated surplus back into the transmission grid. Currently, planning is mainly demand-driven, where the interaction between transmission and distribution is considered as a restriction and where balancing problems at the distribution level are avoided by strict connection rules. There is one load dispatching centre in Ankara providing instructions to all producers to balance the system and to provide ancillary services. While this is a proven method for managing frequency (active power), it is not the most effective way to deal with the local issues of voltage regulation (reactive power), harmonics and other ancillary services, especially when the share of DG is going to increase. The lack of measurement of electricity quality at the local level is also a major concern. The solution to the problems in the distribution network which would emerge with a higher share of DG is mainly to make local dispatch centres more active in power dispatch and to strengthen the distribution grid, which would be able to respond timely to changing conditions in the distribution grids. These local dispatch centres would extend the distribution network with measurement devices feeding into a communication system. As a result, ancillary services will be coordinated and provided locally. In some regions, the possibility of island mode operation could be aimed at by installing sufficient back-up capacities and storages to balance swings in intermittent resources and consumer demand. A simple comparative economic analysis comparing investments in CG and DG indicates that the cost gap between CG and DG may be closed, once the additional costs for transmission services are taken into account. This holds for nearly all DG technologies, except for wind, which technology increases network reinforcement costs are would still be more expensive. This economic analysis provides an important motivation for investors, regulators and MENR to consider DG technologies as a serious and attractive alternative to CG technologies and to prepare for managing the distribution networks actively. In Turkey, the majority of regulatory measures to facilitate DG are already in place. The electricity market is opened and private investors are allowed to invest, insufficient incentives for RES-E are introduced, distribution and transmission systems are already unbundled, grid connection and grid charges are regulated. However, there has not been any active promotion of DG as of today and because of that reason the share of DG is relatively low in Turkey. This may change in the near future, especially when the plans for significant investment in wind begin to be implemented. Maybe only a fraction of the 78 GW license applications made in 2007 will be realised, but even in a situation with wind capacity increasing to 10 GW from the current 0.15 GW (a 70-fold increase) would require the regulatory changes in the current practices of managing the distribution grid in Turkey as further detailed in the regulatory action plan for Turkey toward a higher share of DG.