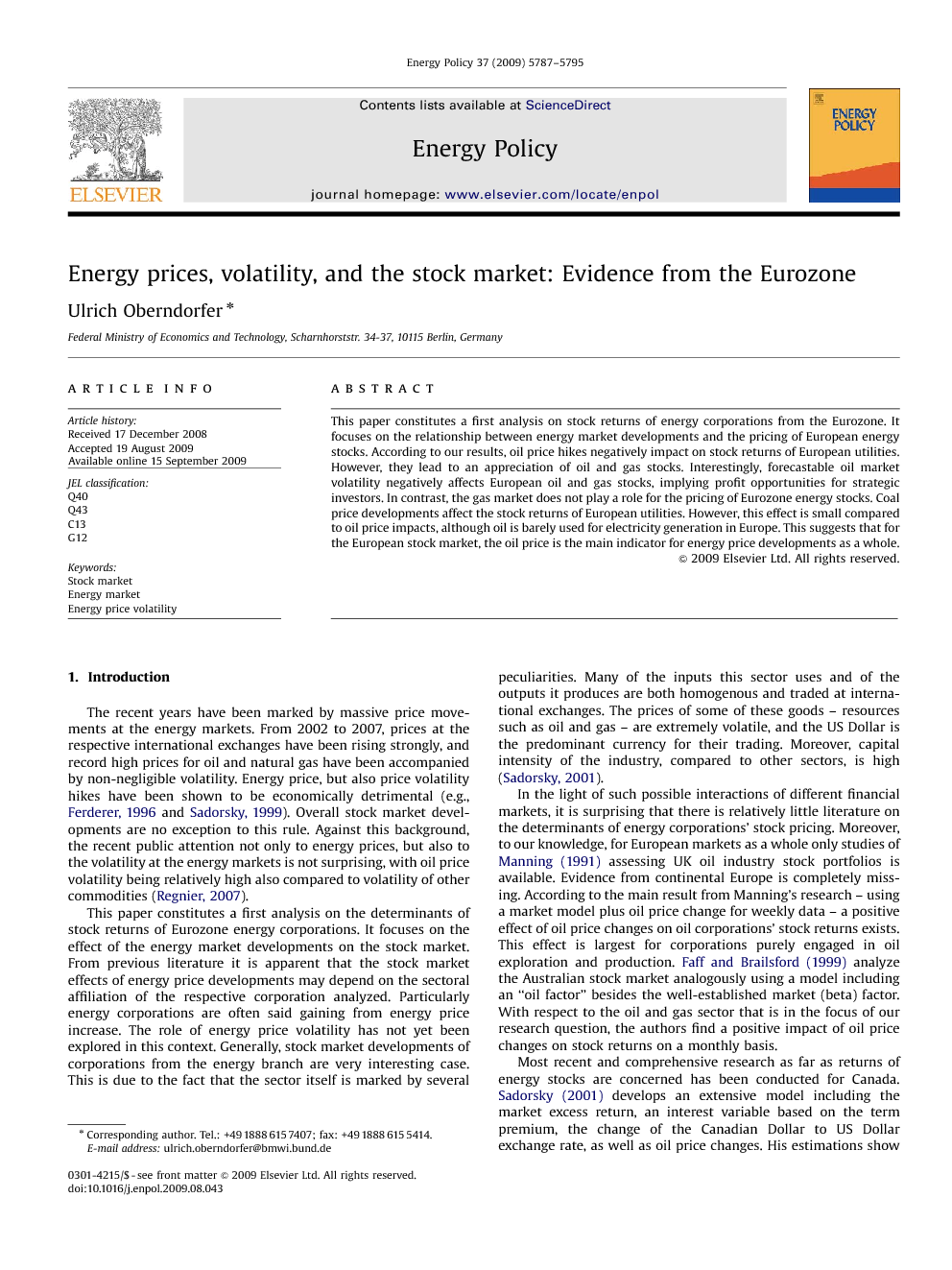 This paper constitutes a first analysis on stock returns of energy corporations from the Eurozone. It focuses on the relationship between energy market developments and the pricing of European energy stocks. According to our results, oil price hikes negatively impact on stock returns of European utilities. However, they lead to an appreciation of oil and gas stocks. Interestingly, forecastable oil market volatility negatively affects European oil and gas stocks, implying profit opportunities for strategic investors. In contrast, the gas market does not play a role for the pricing of Eurozone energy stocks. Coal price developments affect the stock returns of European utilities. However, this effect is small compared to oil price impacts, although oil is barely used for electricity generation in Europe. This suggests that for the European stock market, the oil price is the main indicator for energy price developments as a whole.

The recent years have been marked by massive price movements at the energy markets. From 2002 to 2007, prices at the respective international exchanges have been rising strongly, and record high prices for oil and natural gas have been accompanied by non-negligible volatility. Energy price, but also price volatility hikes have been shown to be economically detrimental (e.g., Ferderer, 1996 and Sadorsky, 1999). Overall stock market developments are no exception to this rule. Against this background, the recent public attention not only to energy prices, but also to the volatility at the energy markets is not surprising, with oil price volatility being relatively high also compared to volatility of other commodities (Regnier, 2007). This paper constitutes a first analysis on the determinants of stock returns of Eurozone energy corporations. It focuses on the effect of the energy market developments on the stock market. From previous literature it is apparent that the stock market effects of energy price developments may depend on the sectoral affiliation of the respective corporation analyzed. Particularly energy corporations are often said gaining from energy price increase. The role of energy price volatility has not yet been explored in this context. Generally, stock market developments of corporations from the energy branch are very interesting case. This is due to the fact that the sector itself is marked by several peculiarities. Many of the inputs this sector uses and of the outputs it produces are both homogenous and traded at international exchanges. The prices of some of these goods – resources such as oil and gas – are extremely volatile, and the US Dollar is the predominant currency for their trading. Moreover, capital intensity of the industry, compared to other sectors, is high (Sadorsky, 2001). In the light of such possible interactions of different financial markets, it is surprising that there is relatively little literature on the determinants of energy corporations’ stock pricing. Moreover, to our knowledge, for European markets as a whole only studies of Manning (1991) assessing UK oil industry stock portfolios is available. Evidence from continental Europe is completely missing. According to the main result from Manning's research – using a market model plus oil price change for weekly data – a positive effect of oil price changes on oil corporations’ stock returns exists. This effect is largest for corporations purely engaged in oil exploration and production. Faff and Brailsford (1999) analyze the Australian stock market analogously using a model including an “oil factor” besides the well-established market (beta) factor. With respect to the oil and gas sector that is in the focus of our research question, the authors find a positive impact of oil price changes on stock returns on a monthly basis. Most recent and comprehensive research as far as returns of energy stocks are concerned has been conducted for Canada. Sadorsky (2001) develops an extensive model including the market excess return, an interest variable based on the term premium, the change of the Canadian Dollar to US Dollar exchange rate, as well as oil price changes. His estimations show that each of these variables plays a statistically significant role in explaining returns from a stock portfolio of Canadian oil and gas corporations. While the market excess return and the oil price change positively impact on portfolio returns, results of Sadorsky (2001) indicate that increases in both the exchange rate and the term premium lower Canadian oil and gas stock returns. Their results with respect to an estimated beta coefficient smaller than one furthermore suggests that the Canadian oil and gas industry is on average less risky than the market. Similarly focussing on Canadian oil and gas corporations, Boyer and Filion (2007) contribute to these findings in adding gas price changes as a factor of stock returns as well as in incorporating firm-specific financial and operational characteristics (“fundamental factors”) such as cash flows and production volume. As the most surprising result from their analysis based on monthly data, Boyer and Filion find that firm production negatively affects stock returns. As far as the determinants of energy stock returns are concerned, the previous literature is largely restricted to the impact of (amongst others) energy prices. Given the background of negative macroeconomic effects of energy price volatility, and Sadorsky, 2003 finding that even technology stocks seem to be driven by oil price volatility, it is very surprising that the relationship between energy market volatility and energy stocks has, to our knowledge, been ignored so far. In contrast, energy stock returns as well as their volatility may also be influenced by energy market volatility. In this respect, the contribution of this paper is twofold: we conduct a first analysis on the determinants of stock returns of energy corporations from the Eurozone, focussing on the role of the energy market for the stock market. For this purpose, we examine two different portfolios of energy stocks: one portfolio consisting of oil and gas corporations’ and one portfolio comprising utilities’ stocks. Particularly, within our empirical approach, we tackle the issue of relationships between energy market volatility and energy corporations’ stocks. The remainder of this paper is structured as follows: Section 2 presents the background including the main hypotheses for our empirical investigation. Section 3 gives the empirical analysis; Section 4 concludes.