عنوان انگلیسی
An over painted oriental arts: Evaluation of the development of the Chinese renewable energy market using the wind power market as a model
دانلود فوری مقاله + سفارش ترجمه 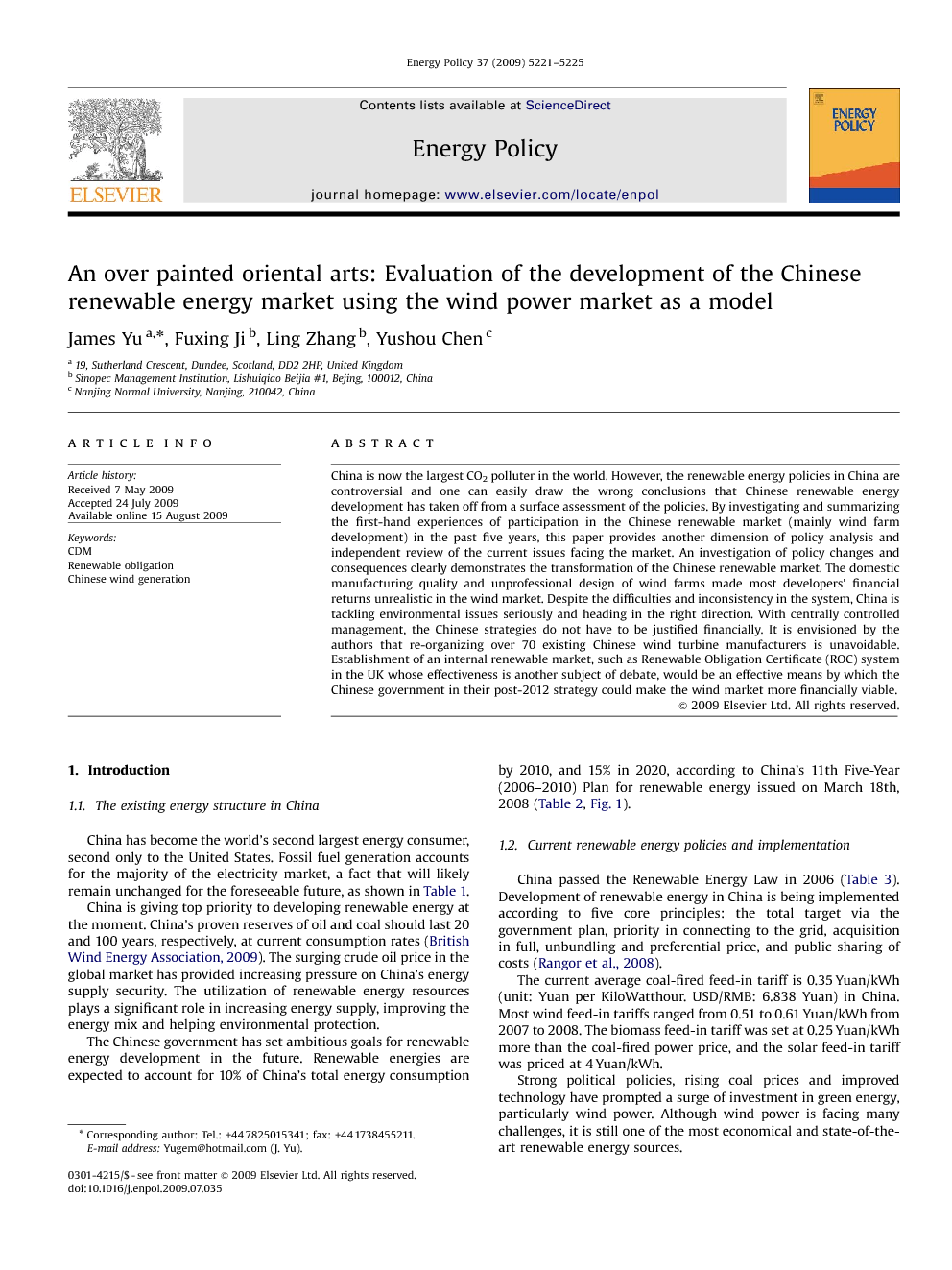 China is now the largest CO2 polluter in the world. However, the renewable energy policies in China are controversial and one can easily draw the wrong conclusions that Chinese renewable energy development has taken off from a surface assessment of the policies. By investigating and summarizing the first-hand experiences of participation in the Chinese renewable market (mainly wind farm development) in the past five years, this paper provides another dimension of policy analysis and independent review of the current issues facing the market. An investigation of policy changes and consequences clearly demonstrates the transformation of the Chinese renewable market. The domestic manufacturing quality and unprofessional design of wind farms made most developers’ financial returns unrealistic in the wind market. Despite the difficulties and inconsistency in the system, China is tackling environmental issues seriously and heading in the right direction. With centrally controlled management, the Chinese strategies do not have to be justified financially. It is envisioned by the authors that re-organizing over 70 existing Chinese wind turbine manufacturers is unavoidable. Establishment of an internal renewable market, such as Renewable Obligation Certificate (ROC) system in the UK whose effectiveness is another subject of debate, would be an effective means by which the Chinese government in their post-2012 strategy could make the wind market more financially viable.

1.1. The existing energy structure in China China has become the world's second largest energy consumer, second only to the United States. Fossil fuel generation accounts for the majority of the electricity market, a fact that will likely remain unchanged for the foreseeable future, as shown in Table 1. China is giving top priority to developing renewable energy at the moment. China's proven reserves of oil and coal should last 20 and 100 years, respectively, at current consumption rates (British Wind Energy Association, 2009). The surging crude oil price in the global market has provided increasing pressure on China's energy supply security. The utilization of renewable energy resources plays a significant role in increasing energy supply, improving the energy mix and helping environmental protection. The Chinese government has set ambitious goals for renewable energy development in the future. Renewable energies are expected to account for 10% of China's total energy consumption by 2010, and 15% in 2020, according to China's 11th Five-Year (2006–2010) Plan for renewable energy issued on March 18th, 2008 (Table 2, Fig. 1). 1.2. Current renewable energy policies and implementation China passed the Renewable Energy Law in 2006 (Table 3). Development of renewable energy in China is being implemented according to five core principles: the total target via the government plan, priority in connecting to the grid, acquisition in full, unbundling and preferential price, and public sharing of costs (Rangor et al., 2008). The current average coal-fired feed-in tariff is 0.35 Yuan/kWh (unit: Yuan per KiloWatthour. USD/RMB: 6.838 Yuan) in China. Most wind feed-in tariffs ranged from 0.51 to 0.61 Yuan/kWh from 2007 to 2008. The biomass feed-in tariff was set at 0.25 Yuan/kWh more than the coal-fired power price, and the solar feed-in tariff was priced at 4 Yuan/kWh. Strong political policies, rising coal prices and improved technology have prompted a surge of investment in green energy, particularly wind power. Although wind power is facing many challenges, it is still one of the most economical and state-of-the-art renewable energy sources. 1.3. Wind power position With its large land mass and long coastline, China is exceptionally rich in wind energy potential. The technical potential on land is 250 GW, with another 750 GW available offshore. In 2008, China added 6.3 GW of wind capacity, bringing the total to 12.2 GW. This was the fourth year in a row that capacity doubled (Fig. 2). Given the ambitious plans for wind farms, China is expected to surpass Germany and Spain to reach second place in terms of total wind power capacity in 2010. It is estimated that China will have met its 2020 target of 30 GW by 2010, ten years ahead of schedule (Mitchell and Connor, 2004; Martinot, 2008). The growing wind power market in China has also encouraged domestic production of wind turbines and components, and the Chinese manufacturing industry is becoming increasingly mature, stretching over the entire supply chain. China, with annual production capacity of 10 GW by the end of 2009, will overtake the US as the world's biggest turbine manufacturer. The wind power sector has gone through rapid development in recent years, and has entered a golden era of development. It is widely believed that wind power will be able to compete with coal generation as early as 2015 or 2020. The competitiveness with coal generation is significant in China, who by then will be the world's largest energy consumer. Wind power is expected to be the third largest source of electricity by 2020, following coal and hydro, and it may be the second biggest electricity supply in China by 2050. These projections are based on the assumptions that the market will respond with the same enthusiasm as the government and that the internal manufacturers are able to cater to the market with acceptable products in time. The reality, however, is much more complicated. The Government, developers, turbine manufacturers, grid company and other stakeholders have made great efforts, but have many challenges. A consistent system, or synergy, will be essential to the success of the renewable energy market in such a large country. Wind power, as a representative of new energy development, can provide very strong guidance for understanding the entire process of Chinese renewable energy development. As a result, the following sections will concentrate on wind power development in China.

This paper provides a summary and understanding of the development of the Chinese renewable market, using a detailed analysis of wind power in the last three years as an example. The Chinese renewable market, directed by political wills only, is in need of financial incentives to make sustainable and accountable progress. The current published installed capacity of wind power has been over-estimated. Such a figure has nothing to do with the contribution and effectiveness of the wind energy in China and by no means can support the claim that Chinese government's renewable target has been achieved. A similar system to ROC in the UK should be considered, along with other feed-in tariff regimes in the EU, by Chinese policy makers to motivate developers, not only big SOEs, to contribute. This paper also advises changes to pricing, turbine manufacturing and network reinforcements. More studies will be needed to determine the policy changes necessary to address the significant geographic and social differences within China.