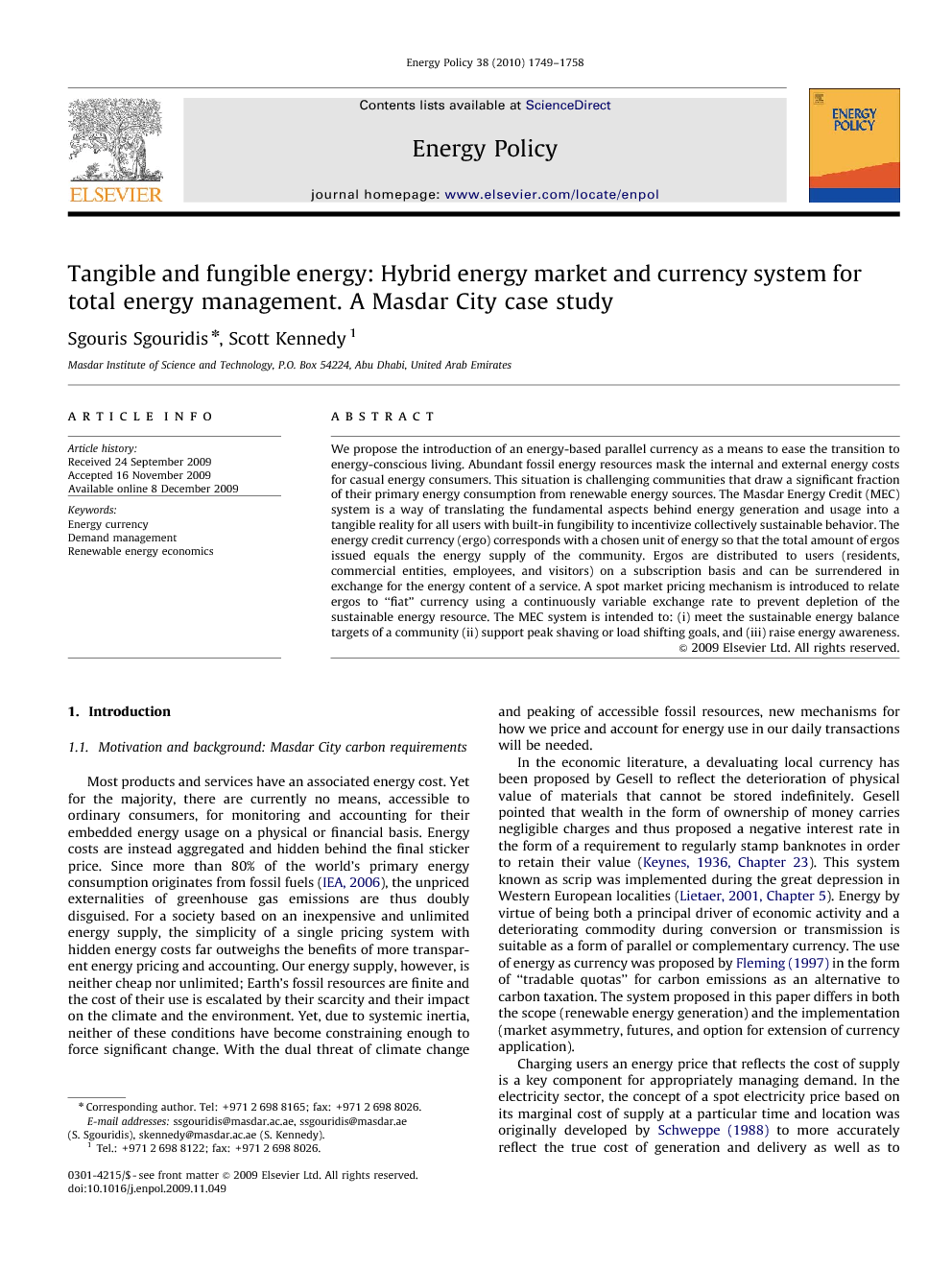 We propose the introduction of an energy-based parallel currency as a means to ease the transition to energy-conscious living. Abundant fossil energy resources mask the internal and external energy costs for casual energy consumers. This situation is challenging communities that draw a significant fraction of their primary energy consumption from renewable energy sources. The Masdar Energy Credit (MEC) system is a way of translating the fundamental aspects behind energy generation and usage into a tangible reality for all users with built-in fungibility to incentivize collectively sustainable behavior. The energy credit currency (ergo) corresponds with a chosen unit of energy so that the total amount of ergos issued equals the energy supply of the community. Ergos are distributed to users (residents, commercial entities, employees, and visitors) on a subscription basis and can be surrendered in exchange for the energy content of a service. A spot market pricing mechanism is introduced to relate ergos to “fiat” currency using a continuously variable exchange rate to prevent depletion of the sustainable energy resource. The MEC system is intended to: (i) meet the sustainable energy balance targets of a community (ii) support peak shaving or load shifting goals, and (iii) raise energy awareness.

In conclusion, the primary differences of the MEC Spot Market System with other energy pricing schemes are that (i) it is retail based, (ii) users cannot speculatively trade ergos, (iii) users cannot accumulate ergos due to their expiration, and (iv) it covers the entire energy value chain of a city or region and thus provides a de facto parallel currency for completing any service or product transaction in the city. Comparing the cumulative actual and desired demand curves rather than total availability or instantaneous demand curves allows the system to avoid predictable shortages and hence exchange rate inflation at the end of the a period while also preventing energy price volatility from momentary demand fluctuations. Further refinement and extension of the proposed system will require the following progressive steps: • simulation testing of pricing formulations using computer modeling; • real experiments using control populations to estimate the system’s relative effectiveness; • increasing scope of services and including indirect energy to expand role as complementary currency; • application in a region with less integrated infrastructures than in Masdar City and application in a region with a proportional rather than total renewable energy target.