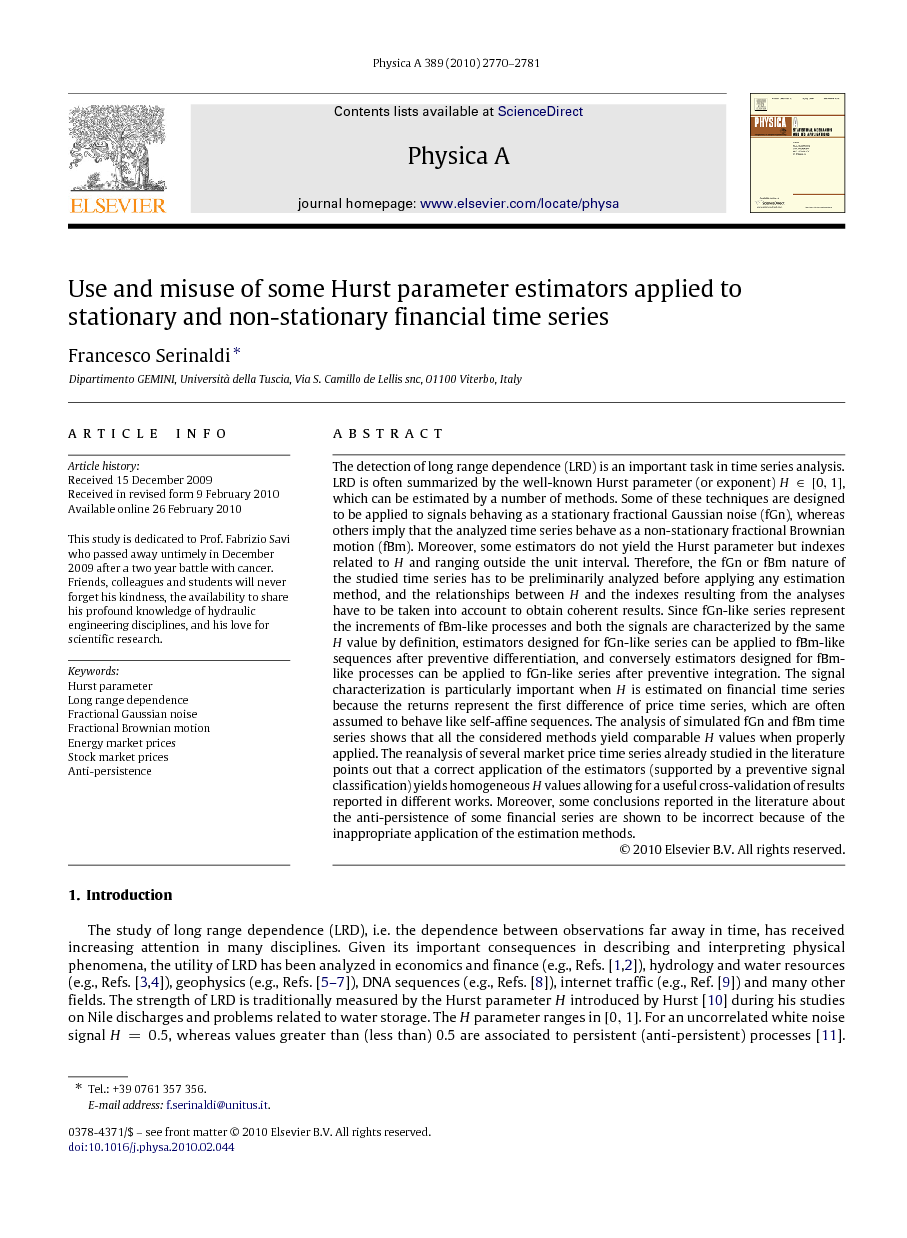 The detection of long range dependence (LRD) is an important task in time series analysis. LRD is often summarized by the well-known Hurst parameter (or exponent) H∈[0,1]H∈[0,1], which can be estimated by a number of methods. Some of these techniques are designed to be applied to signals behaving as a stationary fractional Gaussian noise (fGn), whereas others imply that the analyzed time series behave as a non-stationary fractional Brownian motion (fBm). Moreover, some estimators do not yield the Hurst parameter but indexes related to HH and ranging outside the unit interval. Therefore, the fGn or fBm nature of the studied time series has to be preliminarily analyzed before applying any estimation method, and the relationships between HH and the indexes resulting from the analyses have to be taken into account to obtain coherent results. Since fGn-like series represent the increments of fBm-like processes and both the signals are characterized by the same HH value by definition, estimators designed for fGn-like series can be applied to fBm-like sequences after preventive differentiation, and conversely estimators designed for fBm-like processes can be applied to fGn-like series after preventive integration. The signal characterization is particularly important when HH is estimated on financial time series because the returns represent the first difference of price time series, which are often assumed to behave like self-affine sequences. The analysis of simulated fGn and fBm time series shows that all the considered methods yield comparable HH values when properly applied. The reanalysis of several market price time series already studied in the literature points out that a correct application of the estimators (supported by a preventive signal classification) yields homogeneous HH values allowing for a useful cross-validation of results reported in different works. Moreover, some conclusions reported in the literature about the anti-persistence of some financial series are shown to be incorrect because of the inappropriate application of the estimation methods.

The study of long range dependence (LRD), i.e. the dependence between observations far away in time, has received increasing attention in many disciplines. Given its important consequences in describing and interpreting physical phenomena, the utility of LRD has been analyzed in economics and finance (e.g., Refs. [1] and [2]), hydrology and water resources (e.g., Refs. [3] and [4]), geophysics (e.g., Refs. [5], [6] and [7]), DNA sequences (e.g., Refs. [8]), internet traffic (e.g., Ref. [9]) and many other fields. The strength of LRD is traditionally measured by the Hurst parameter HH introduced by Hurst [10] during his studies on Nile discharges and problems related to water storage. The HH parameter ranges in [0,1][0,1]. For an uncorrelated white noise signal H=0.5H=0.5, whereas values greater than (less than) 0.5 are associated to persistent (anti-persistent) processes [11]. Theoretical processes exhibiting LRD are the self-affine processes [12]. The simplest example of these processes is the Brownian motion or random walk, which is defined as the cumulative sum of a Gaussian white noise signal. The Gaussian noise and Brownian motion can be generalized by introducing the concept of fractional differentiation, leading to the so-called fractional Gaussian noise (fGn) and fractional Brownian motion (fBm) [12], [13] and [2]. Since in the original definition given by Mandelbrot and Van Ness [12], a unique HH value characterizes both fBm and its increments, which represent the corresponding fGn (see also Ref. [11]), it is necessary to complement HH with a piece of information about the type of signal we are dealing with (fGn or fBm) to avoid ambiguity [14]. Distinguishing between fBm- and fGn-like series is particularly important for correctly estimating the HH parameter. Indeed, as discussed in more detail in the next sections, a number of commonly applied graphical estimators available in the literature rely explicitly or implicitly on the assumption that the analyzed series are fBm- or fGn-like. As pointed out by Cannon et al. [14], invalid results and conclusions about the estimation of HH are due to the above-mentioned duality between fBm and fGn. FBm, fGn and LRD play a prominent role in financial time series analysis. Brownian motion is particularly important in finance and economics because it naturally arises from the basic hypotheses of the early definition of the “efficient market hypothesis”, which was assumed to imply that successive price changes (or more usually, successive one-period returns) are independent [15]. Even though a Brownian (or geometric Brownian) behavior can be empirically observed in price time series (e.g., Ref. [16]), some market prices exhibit auto-correlated returns and anti-persistence (also referred to as mean reversion). Hence, the LRD assessment has received increasing attention due to its relevant implications in time series modeling and forecasting (e.g., Refs. [17], [18], [19], [20], [21], [22] and [23], among many others). This paper explores the importance of preventive signal classification (before applying HH estimators) with a focus on price time series analysis, extending the works by Cannon et al. [14], Malamud and Turcotte [24] and Li [6] in three issues: (i) the relationships between HH and the indexes returned by the estimators are studied for additional methods; (ii) results of the appropriate application of the methods are shown for a number of financial time series as well as for simulated series, (iii) an indirect method for signal classification based on the properties of HH estimators is suggested. Moreover, the reanalysis of real-world market data shows that all methods, when properly applied, yield homogeneous and coherent HH values, allowing for a cross-validation of results and a more reliable assessment of possible anti-persistence. The remainder of the paper is structured as follows. In the next section, some properties of self-affine sequences are recalled and the literature coping with the problem of signal classification for a proper HH estimation is reviewed. Next, the relationships between HH and the indexes returned by seven graphical HH estimators are discussed, and an indirect method for signal classification is suggested in Section 3. Section 4 reports the reanalysis of several price time series already studied in the literature, pointing out some misleading results due to an incorrect application of the methods. Final remarks and conclusions close the work.

Several details concerning the application of the described estimators were not discussed in the previous sections. However, some of them deserve to be commented upon. The considered methods have a graphical nature. They are based on plotting a statistic versus a variable, which is often a scaling window, and then fitting a power law to the obtained empirical pattern (see e.g., Fig. 2). An appropriate choice of an inner cut-off and an outer cut-off, which define the interval of windows where the pattern of the plotted statistic is approximately linear, is required (e.g., Refs. [40] and [14]). Even though some empirical guidelines are reported in the literature (e.g., Refs. [40], [8] and [14]), this choice is somewhat subjective and can affect the results. The uncertainty related to this choice is usually at least one order of magnitude greater than the variability described by the confidence intervals of the slopes of the regression lines commonly reported in the literature. For these reasons, the HH estimates in Table 2 were not complemented with confidence intervals. On the other hand, the variability of the point estimates obtained by different estimators can provide the first assessment of the overall uncertainty. Moreover, a detailed analysis of the graphs related to the estimators allows highlighting scaling breaks and crossover behaviors (e.g., Ref. [57]). However, this more refined analysis, as well as a multifractal analysis, are beyond the goals of this paper. This study points out that Hurst parameter estimators are closely related to self-affine properties of the analyzed signals, which can be summarized by the slope ββ of the power-law pattern of PSD. In particular, HH estimators are designed to be applied to series with ββ ranging within appropriate intervals. Since the HH estimates saturate to 0 or 1 outside these intervals, the preliminary assessment of ββ is required for the correct application of the estimators. This saturation property can be exploited to check the accuracy of the signal classification through the application of the estimators to differenced and integrated series as well as to the original series. Moreover, some methods do not directly yield HH values, but indexes that have to be transformed into HH by analytical relationships depending on ββ. As shown in Section 4, the analysis can return misleading results when these issues are not taken into account. Conversely, when the estimators are correctly applied, the resulting estimates are congruent and comparable to each other. The practical equivalence of seven estimators was tested on simulated series and on several time series of prices and returns of stocks and commodities. Under the hypothesis of self-affinity, prices and corresponding first differences (returns) should be characterized by a unique HH value complemented with information about the classification of the signals (fGn-like, fBm-like, etc.). Some empirical findings reported in the literature can be obtained by methods conceptually different, resulting in a useful cross-validation. On the other hand, the apparent discrepancy of some results is solved by the correct application and interpretation of the HH estimators.