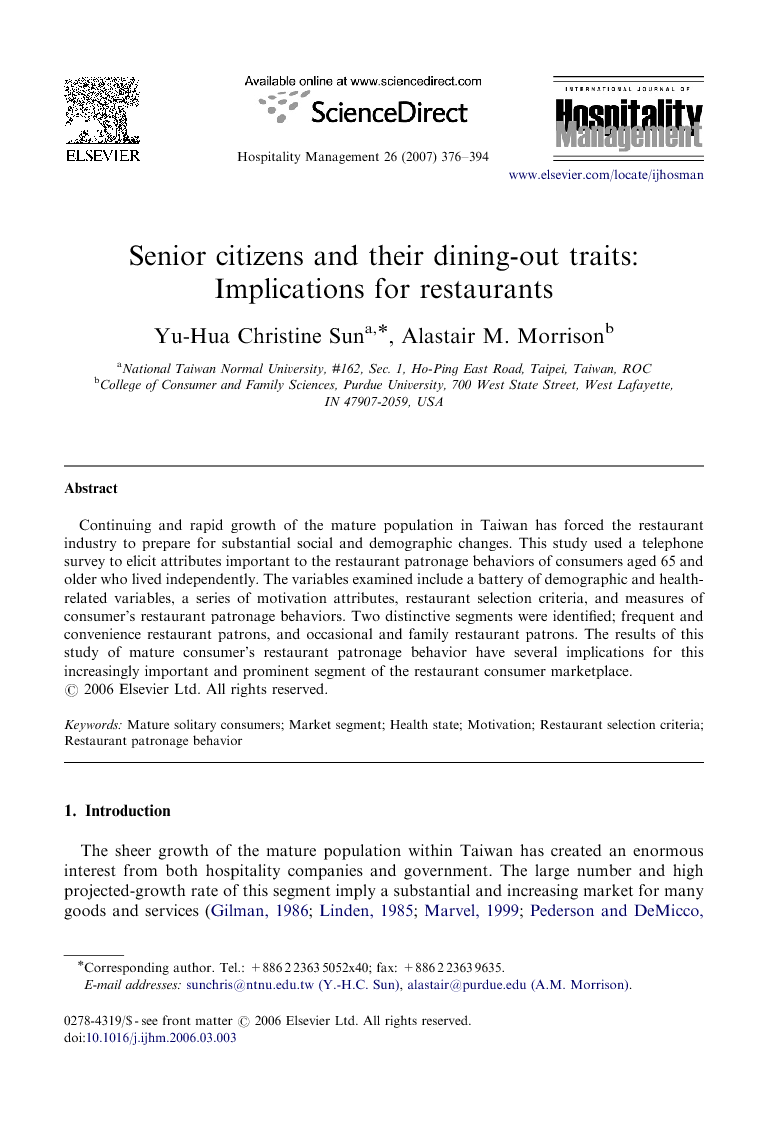 The sheer growth of the mature population within Taiwan has created an enormous interest from both hospitality companies and government. The large number and high projected-growth rate of this segment imply a substantial and increasing market for many goods and services (Gilman, 1986; Linden, 1985; Marvel, 1999; Pederson and DeMicco, 1993; Petre, 1986; Stevens, 2001). Between 1950 and 2000, Taiwan's 65 and older population increased from 2.4% to 9%. According to the 2004 Taiwan Census, the current population of people over 65 years old is approximately 2.2 million (9.5%). By 2030, the elderly population will approach 20%. Changing social and family structures have resulted in the rapid growth of this portion of the solitary population over 65 years old. Mature consumers are a market segment that should be cultivated as they tend to be more store-loyal than their younger counterparts (Lipke, 2000; Schewe, 1985; Uncles and Ehrenberg, 1990). For example, a survey conducted by the National Family Opinion Institute found that 80% of mature retired couples were loyal to a particular restaurant, making them the most loyal of any age group (Moschis, 1999). Despite their widely acknowledged importance, very little is known about the structure underlying the restaurant preferences and patronage behaviors of the solitary elderly. Furthermore, for restaurant companies operating internationally, understanding and serving the needs of local markets are essential for success. The results of this study could provide important insights in developing marketing and operational strategies for international restaurant companies. Most previous research into the consumption behavior of mature consumers has tended to be descriptive , with little attention being given to the explanation of consumption habits and restaurant choice behaviors (Tantiwong and Wilton, 1985). For example, studies by Cooper et al. (1991), Schiffman (1993), Clydesdale (1994), and Dollarhide (1995) examined factors influencing the appetites of elderly individuals. More recently, several authors have attempted to identify important restaurant requirements of the mature market (Knutson and Patton, 1993; Moschis et al., 2003; Shank and Nahhas, 1994; Williams et al., 1997; Yamanaka et al., 2003). However, while these studies are important, they have generally failed to identify the determinant attributes associated with mature consumers’ restaurant patronage behaviors. Thus, the value of such studies for prescriptive marketing planning is limited. It is also important to recognize that most prior studies have generally assumed mature consumers to be homogeneous in their benefits sought from competing restaurants and restaurant patronage behaviors. Tibbett (1993) found that three-fourths of respondents aged 65 and older were dissatisfied with the techniques companies used in marketing to older consumers. Almost no empirical research has been done to assess the influences of physical health situation, emotional states, and restaurant selection criteria on solitary mature consumers’ restaurant patronage behaviors. Thus, despite many important advances in our knowledge of the mature segment over the past decades, restaurateurs and marketing practitioners still have little guidance for designing products or services that best fit the needs of mature consumers. Thus, the research objectives of the study were two fold: 1. Categorize solitary elderly consumers who dine out into different segments according to the types of restaurants they frequent. 2. Determine if these segments can be identified by sociodemographic characteristics, health states, motivation variables, and restaurant selection criteria.

The aging of the population caused by decreasing birth and mortality rates have merged to create an enormous demographic shift away from a youthful towards a mature population. This study clearly demonstrated that mature consumers’ restaurant patronage behaviors are heterogeneous. In summary, the results of this current quantitative study indicate that sociodemographic characteristics, health states, motivations for dining out, and restaurant selection criteria are significantly associated with restaurant patronage behaviors. The results should encourage further investigation into the types of individual and environmental variables that influence restaurant patronage behaviors as well as the cognitive processes of mature consumers as they react to various marketing stimuli. Of particular importance should be the development of marketing and operational strategies based on applying multi-dimensional approaches that incorporate very specific restaurant attributes that are relevant to the segments identified. Although Taipei, Taiwan specific, the issues discussed in this article may be relevant to other cities and countries experiencing similar demographic shifts and social changes. The findings of this research can be helpful to researchers in other countries in identifying broad arrays of variables affecting mature consumers’ restaurant patronage behaviors. The findings also provide a foundation for empirical research on opportunities to market by providing guidelines on the types of factors to explore in modeling consumer patronage behavior.