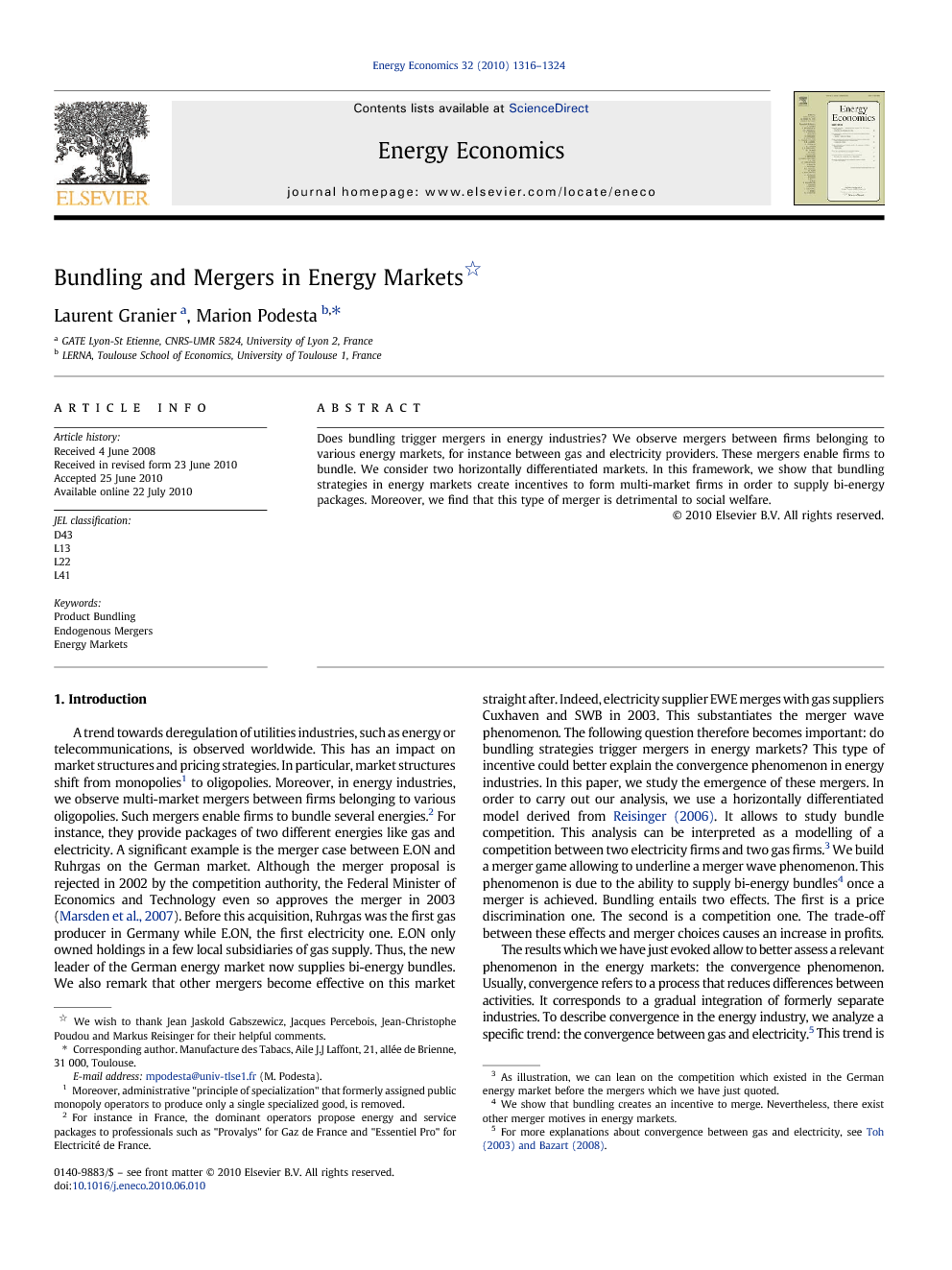 Does bundling trigger mergers in energy industries? We observe mergers between firms belonging to various energy markets, for instance between gas and electricity providers. These mergers enable firms to bundle. We consider two horizontally differentiated markets. In this framework, we show that bundling strategies in energy markets create incentives to form multi-market firms in order to supply bi-energy packages. Moreover, we find that this type of merger is detrimental to social welfare.

We observe an increasing number of mergers in the energy markets. A lot of them concern firms from different markets such as gas and electricity. Whatever the merger, it allows firms to supply bi-energy bundles. Our paper studies the bundling effects on merger incentives in energy markets. We show that bundling strategies always create merger incentives for specialized firms (electricity or gas firms). The intuitive explanation is the following. Although competition effects of a merger involving firms from two independent markets are non-existent with an independent pricing, competition effects appear if the merger allows product bundling. First, we show that there is always an incentive to follow a bundling strategy once the merger is achieved. When bundling is not possible, we find that there is no incentive to merge. From these two results, we deduce that bundling strategy generates not only a merger incentive but also a merger wave. This incentive comes from the sorting effect of the bundling strategy. However, a competition effect, which is negative for firms' profits, is also generated by the bundling strategy. We find that, in order to take better advantage of the sorting effect and to avoid the competition effect, energy firms choose between two merger types. This choice is function of the correlation of consumers' reservation prices for the two energies. An electric firm can merge with a gas firm at the same location on the other circle. An electric firm can also merge with a gas firm at opposite location on the other circle. We call homogeneous and heterogeneous mergers, respectively. These merger opportunities remove the prisoner's dilemma created by the dominance of the competition effect which is emphasized by Reisinger (2006). Our model has important implications concerning competition policy. We show that bundling strategies have a negative effect on social welfare, but in our model this effect is weaker than in Reisinger (2006). Competition authorities should pay more attention to mergers in domestic markets, such mergers may be authorized by the governments in order to promote national champions. However, we must note that our analysis don't take into consideration potential efficiency gains following a merger. A direction for future research could be the introduction of these effects. The introduction of other effects like efficiency gains could affect the results.