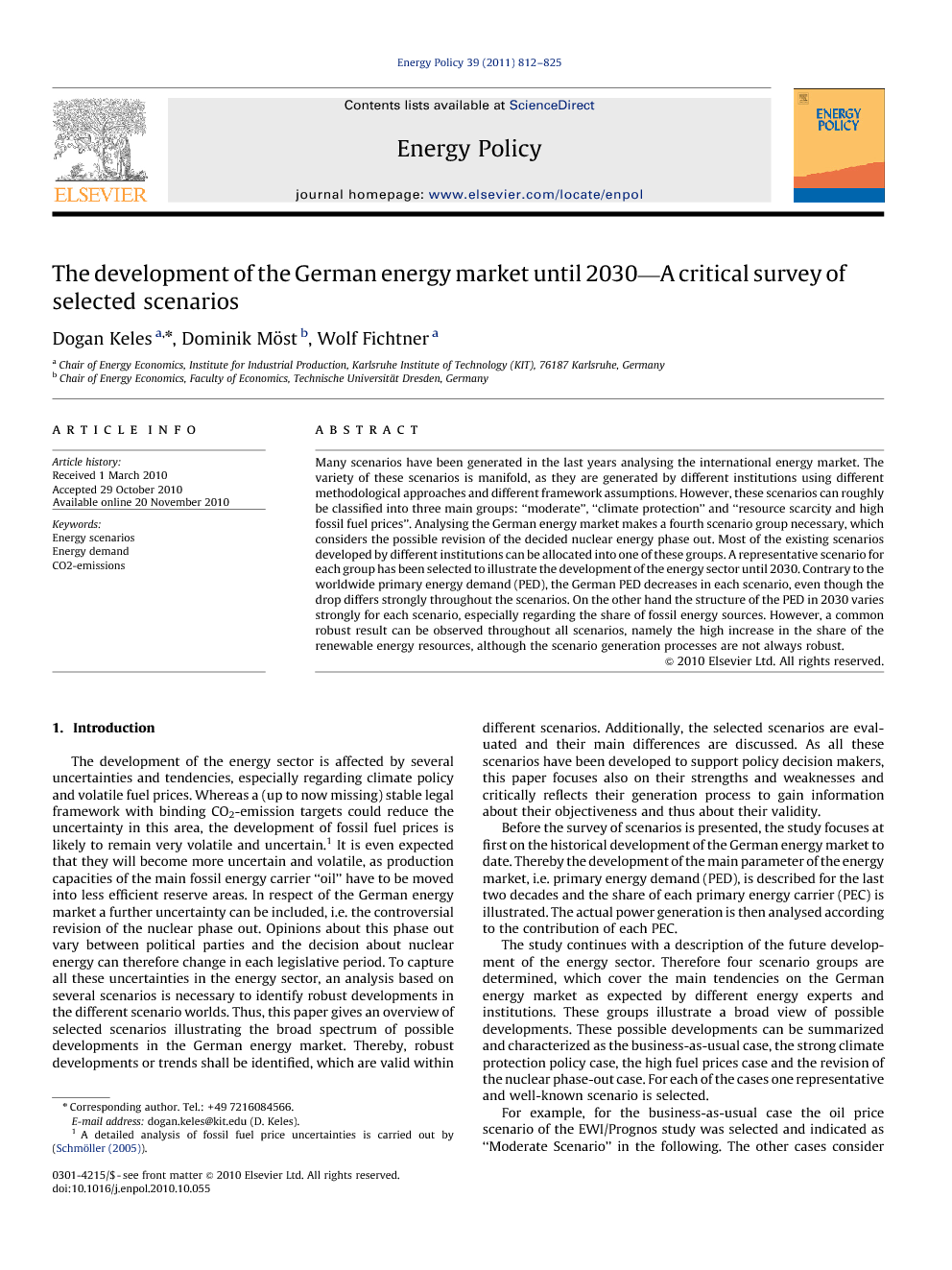 Many scenarios have been generated in the last years analysing the international energy market. The variety of these scenarios is manifold, as they are generated by different institutions using different methodological approaches and different framework assumptions. However, these scenarios can roughly be classified into three main groups: “moderate”, “climate protection” and “resource scarcity and high fossil fuel prices”. Analysing the German energy market makes a fourth scenario group necessary, which considers the possible revision of the decided nuclear energy phase out. Most of the existing scenarios developed by different institutions can be allocated into one of these groups. A representative scenario for each group has been selected to illustrate the development of the energy sector until 2030. Contrary to the worldwide primary energy demand (PED), the German PED decreases in each scenario, even though the drop differs strongly throughout the scenarios. On the other hand the structure of the PED in 2030 varies strongly for each scenario, especially regarding the share of fossil energy sources. However, a common robust result can be observed throughout all scenarios, namely the high increase in the share of the renewable energy resources, although the scenario generation processes are not always robust.

The development of the energy sector is affected by several uncertainties and tendencies, especially regarding climate policy and volatile fuel prices. Whereas a (up to now missing) stable legal framework with binding CO2-emission targets could reduce the uncertainty in this area, the development of fossil fuel prices is likely to remain very volatile and uncertain.1 It is even expected that they will become more uncertain and volatile, as production capacities of the main fossil energy carrier “oil” have to be moved into less efficient reserve areas. In respect of the German energy market a further uncertainty can be included, i.e. the controversial revision of the nuclear phase out. Opinions about this phase out vary between political parties and the decision about nuclear energy can therefore change in each legislative period. To capture all these uncertainties in the energy sector, an analysis based on several scenarios is necessary to identify robust developments in the different scenario worlds. Thus, this paper gives an overview of selected scenarios illustrating the broad spectrum of possible developments in the German energy market. Thereby, robust developments or trends shall be identified, which are valid within different scenarios. Additionally, the selected scenarios are evaluated and their main differences are discussed. As all these scenarios have been developed to support policy decision makers, this paper focuses also on their strengths and weaknesses and critically reflects their generation process to gain information about their objectiveness and thus about their validity. Before the survey of scenarios is presented, the study focuses at first on the historical development of the German energy market to date. Thereby the development of the main parameter of the energy market, i.e. primary energy demand (PED), is described for the last two decades and the share of each primary energy carrier (PEC) is illustrated. The actual power generation is then analysed according to the contribution of each PEC. The study continues with a description of the future development of the energy sector. Therefore four scenario groups are determined, which cover the main tendencies on the German energy market as expected by different energy experts and institutions. These groups illustrate a broad view of possible developments. These possible developments can be summarized and characterized as the business-as-usual case, the strong climate protection policy case, the high fuel prices case and the revision of the nuclear phase-out case. For each of the cases one representative and well-known scenario is selected. For example, for the business-as-usual case the oil price scenario of the EWI/Prognos study was selected and indicated as “Moderate Scenario” in the following. The other cases consider extensive and ambitious climate policies, scarcity of fossil fuels combined with extremely high prices and at last the revision of the act on nuclear phase out in Germany. Renowned scenarios are selected to represent these cases. These scenarios are described in detail with their settings and assumptions (see Section 3). As the main assumption is the development of primary energy prices, the scenario description and selection focuses on the discussion about fuel prices. However, other key economic assumptions behind the scenarios, such as GDP growth and population development, are also described in Section 3. After the scenario description, the methodology behind the selected scenarios is shortly presented in Section 4. The analysis continues with the comparison of the scenario results, which are illustrated on the basis of key parameters (PED, electricity generation, etc.) most relevant for energy markets. At first these parameters are displayed for the global energy market considering a baseline and an alternative scenario. Afterwards the future development of the German energy market is described with the help of future PED, gross electricity production and heat generation in the different scenario groups. Besides, the scope of the study is also set on the share of different energy carriers (oil, coal, gas, nuclear and renewable) within the PED and electricity production. Furthermore, the study covers the development of energy related parameters, e.g. the annual CO2-emissions, in each representative scenario. Thereby both, total as well as electricity related CO2-emissions are analysed. In Section 6 the presented scenarios are critically reflected. Thereby the importance of energy scenarios and prognoses, so-called energy futures, is highlighted, as they are often used to support decisions on energy policies and technologies. As scenarios play an important role for decision making, they should be as objective as possible. Therefore it is discussed, on which type of assumptions the scenarios are carried out and if the scenario generation follows an iterative process. An iterative process raises the quality and objectiveness of the scenario, and thus the validity of their key outcome. However, this analysis shall not end in criticism of the selected scenarios and the methods behind them; rather it will point out the variety of energy scenarios and the difficulties in their development. Therefore this paper will give an impulse to reflect scenarios stronger and thus make them more objective. Finally, the main aspects of the scenario analysis and the basic results are summarized in the conclusions, while the possible direction of future work is also noted there.

This scenario analysis highlights an expected trend regarding future energy demand in Germany. The annual PED decreases significantly in all scenarios, which can be observed as a first robust result all over. But the amount of the reduction differs between 16% and 33% until 2030 in the analysed scenarios. Futhermore, the share of the primary energy carriers within the PED varies strongly throughout the scenarios, as the analysed scenarios cover a wide range of different developments for the German energy market. While fossil energy carriers, for example, still have the highest share within the PED in the Moderate and the Nuclear Scenario in 2030, their share decreases stronger in the Climate and the Resources Scenario and RES play more and more a dominant role. The strong increase of RES within the PED and electricity production is another robust result. The RES will become the main resource for electricity generation from 2030 on in all scenarios. Although the share of RES within the PED reaches the triple of its today’s level in the Moderate and twice its amount in the Nuclear Scenario until 2030, they do not play the most important role in these scenarios, as is the case in the Climate and the Resources Scenario. Further, the scenario analysis points out that the nuclear energy will probably keep its present importance for electricity generation or even become more important, if the act on nuclear phase out is revised (Nuclear Scenario). In this case it will contribute to the reduction of the total CO2-emissions, but the reduction rate is not as high as in the Climate Scenario, which follows its preset constraint describing a CO2-emissions reduction of 80% by 2050. The lowest decline of the CO2-emissions can be observed in the Moderate Scenario, where the CO2-emissions are reduced by 29% until 2030. That means in all scenarios, even in the Moderate Scenario, a very significant reduction of the annual CO2-emissions will be achieved, so that this can be observed as a further robust result. Finally, the importance of the scenario generation process has been illustrated to discuss the quality of the scenarios. It is not possible to analyse the quality of the scenarios based on their today’s outcome. After for example 20 years an ex-post analysis would be possible, but the political and managerial decisions have to be taken today or in the next few years, so that this quality check will not be really helpful. Therefore the quality of the scenarios is checked by the analysis of the “ceteris paribus” and “ad-hoc” assumptions as well as the use of an iterative approach within the scenario generation process. From that point of view, the objectiveness of the assumptions and the quality of the generation process differs among the scenarios. The Moderate and the Climate Scenario are based on an iterative approach, which makes them more robust, but they contain also subjective characteristics. The Climate Scenario is in particular strongly dependent on the 80% CO2-emissions reduction target. The use of such subjective information reduces the validity of the scenarios and makes them more debatable. The objectiveness is limited even more in the Resources and Nuclear Scenario, as they depend on very decisive ad-hoc assumptions, such as very high fuel prices or revision of the nuclear energy phase out. Their validity will be undermined, if these ad-hoc assumptions do not come true. Besides, these two scenarios are not based on an iterative process that could incorporate new information and knowledge of different experts. So this issue reduces the objectiveness of these scenarios. However, the combination of all four scenario groups illustrates an overall picture of possible future developments in the German energy market and highlights the diversity of expectations among energy experts regarding energy futures.