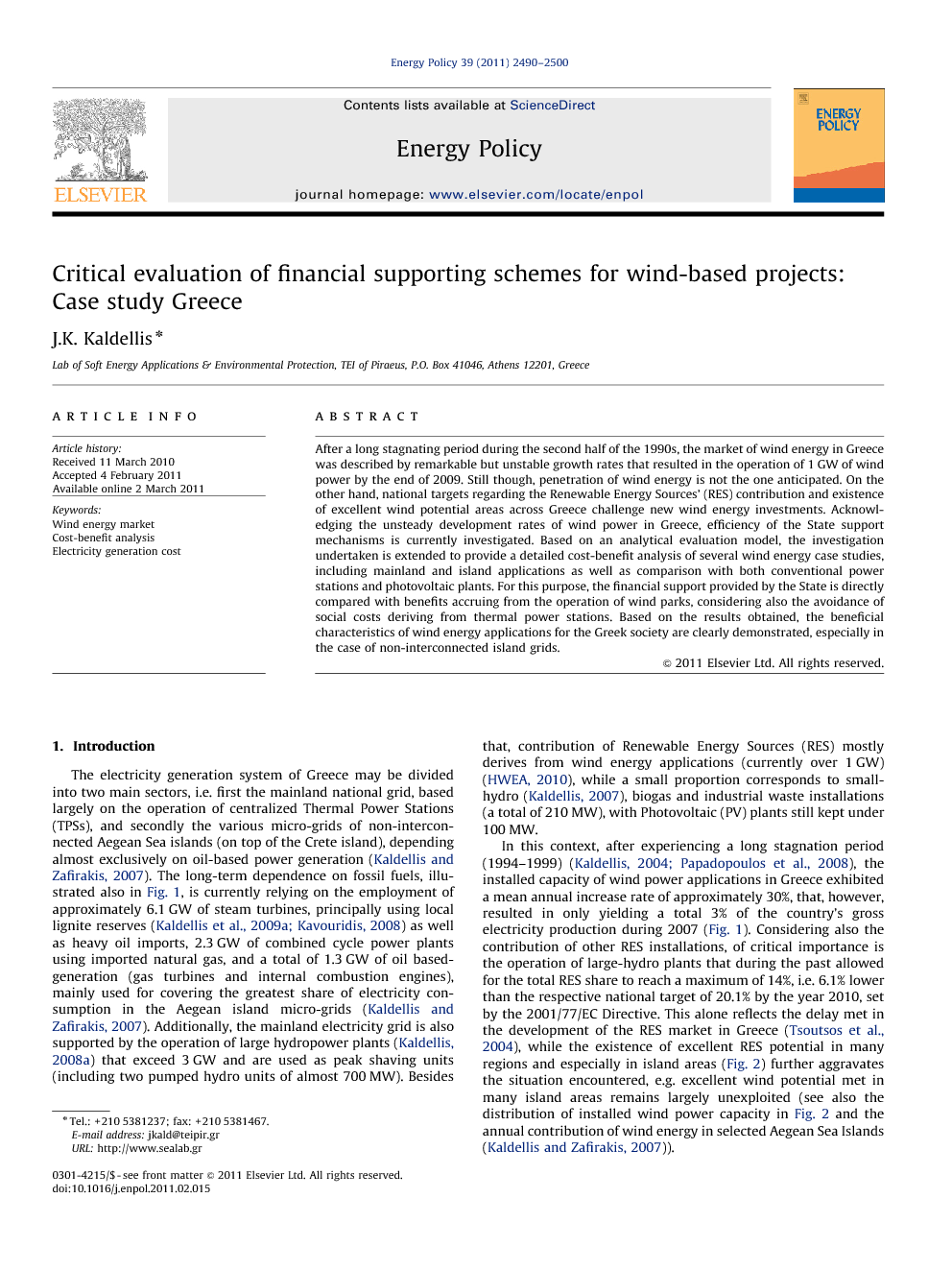 After a long stagnating period during the second half of the 1990s, the market of wind energy in Greece was described by remarkable but unstable growth rates that resulted in the operation of 1 GW of wind power by the end of 2009. Still though, penetration of wind energy is not the one anticipated. On the other hand, national targets regarding the Renewable Energy Sources’ (RES) contribution and existence of excellent wind potential areas across Greece challenge new wind energy investments. Acknowledging the unsteady development rates of wind power in Greece, efficiency of the State support mechanisms is currently investigated. Based on an analytical evaluation model, the investigation undertaken is extended to provide a detailed cost-benefit analysis of several wind energy case studies, including mainland and island applications as well as comparison with both conventional power stations and photovoltaic plants. For this purpose, the financial support provided by the State is directly compared with benefits accruing from the operation of wind parks, considering also the avoidance of social costs deriving from thermal power stations. Based on the results obtained, the beneficial characteristics of wind energy applications for the Greek society are clearly demonstrated, especially in the case of non-interconnected island grids.

The electricity generation system of Greece may be divided into two main sectors, i.e. first the mainland national grid, based largely on the operation of centralized Thermal Power Stations (TPSs), and secondly the various micro-grids of non-interconnected Aegean Sea islands (on top of the Crete island), depending almost exclusively on oil-based power generation (Kaldellis and Zafirakis, 2007). The long-term dependence on fossil fuels, illustrated also in Fig. 1, is currently relying on the employment of approximately 6.1 GW of steam turbines, principally using local lignite reserves (Kaldellis et al., 2009a and Kavouridis, 2008) as well as heavy oil imports, 2.3 GW of combined cycle power plants using imported natural gas, and a total of 1.3 GW of oil based-generation (gas turbines and internal combustion engines), mainly used for covering the greatest share of electricity consumption in the Aegean island micro-grids (Kaldellis and Zafirakis, 2007). Additionally, the mainland electricity grid is also supported by the operation of large hydropower plants (Kaldellis, 2008a) that exceed 3 GW and are used as peak shaving units (including two pumped hydro units of almost 700 MW). Besides that, contribution of Renewable Energy Sources (RES) mostly derives from wind energy applications (currently over 1 GW) (HWEA, 2010), while a small proportion corresponds to small-hydro (Kaldellis, 2007), biogas and industrial waste installations (a total of 210 MW), with Photovoltaic (PV) plants still kept under 100 MW. In this context, after experiencing a long stagnation period (1994–1999) (Kaldellis, 2004 and Papadopoulos et al., 2008), the installed capacity of wind power applications in Greece exhibited a mean annual increase rate of approximately 30%, that, however, resulted in only yielding a total 3% of the country's gross electricity production during 2007 (Fig. 1). Considering also the contribution of other RES installations, of critical importance is the operation of large-hydro plants that during the past allowed for the total RES share to reach a maximum of 14%, i.e. 6.1% lower than the respective national target of 20.1% by the year 2010, set by the 2001/77/EC Directive. This alone reflects the delay met in the development of the RES market in Greece (Tsoutsos et al., 2004), while the existence of excellent RES potential in many regions and especially in island areas (Fig. 2) further aggravates the situation encountered, e.g. excellent wind potential met in many island areas remains largely unexploited (see also the distribution of installed wind power capacity in Fig. 2 and the annual contribution of wind energy in selected Aegean Sea Islands (Kaldellis and Zafirakis, 2007)). Acknowledging the relatively slow development rates of RES installations in Greece, efficiency of the current status support mechanisms (Tsoutsos et al., 2008) should be evaluated. More specifically, in the present study, an attempt is made in order to critically review – on the basis of a detailed quantification methodology – the efficiency of the State-funded financial support mechanisms for wind energy (Lewis and Wiser, 2007 and Hiroux and Saguan, 2010) in the Greek territory. Based on an extensive cost-benefit analysis, gains or losses accruing from the support of wind energy applications by the local State and ultimately the local society shall either ground the rationale of a wind-based electricity generation policy or designate the inefficient character of these measures, leading either to their reformation or the shift of support to other energy solutions available. For this purpose, a number of case studies capturing the entire range of wind energy applications in the Greek territory are currently examined, providing direct comparison results with both thermal power and other RES solutions (PV applications in particular), in either the mainland or the non-interconnected island areas. Prior to that, a brief description of the existing support framework introduces the subject under examination, while accordingly a detailed presentation of the proposed evaluation model is also available.

Synopsizing, one of the main conclusions of the specific work is that financial motives offered by the Greek State concerning the promotion of island wind parks are found to be inferior, even to the cost of operating the local APSs, while if one takes also into account the additional gains accruing from the production of wind energy, the corresponding benefit is doubled. Besides, the same conclusion is valid for mainland wind parks in case that a direct comparison is attempted with the operation of NG power stations, while mainland wind parks and lignite stations equate, providing that the social cost of the corresponding TPSs is also – even barely – considered. Furthermore, subsidy of the first installation cost for wind power applications, comprising a serious motivation for potential investors, is in the long-run returned to the Greek State via taxation fees, while according to the results obtained, it is only partly responsible for the configuration of the overall State-financial support. On the contrary, of greater importance in terms of contributing to the overall State-financial support is the provision of a fairly steady and guaranteed wind energy price (FIT mechanism), that should ideally, however, be configured in relation to the time-evolution of either the local or the national electricity generation cost rates. On the other hand, financial support offered to PV applications in island regions is not justified on the basis of the respective benefits accruing from the operation of such plants and the substitution of oil-based power stations, except for the cases that very small island networks of extremely high electricity production cost are considered. In parallel, it must be noted that in contrast to the initial investment subsidy of wind energy applications, the respective parameter is critical for the configuration of the overall State-financial support of PVs, corresponding to values that even exceed 65 €/MWh, while energy prices (FITs) offered to PV applications may only be justified if other, hard to quantify parameters, are also taken into account.