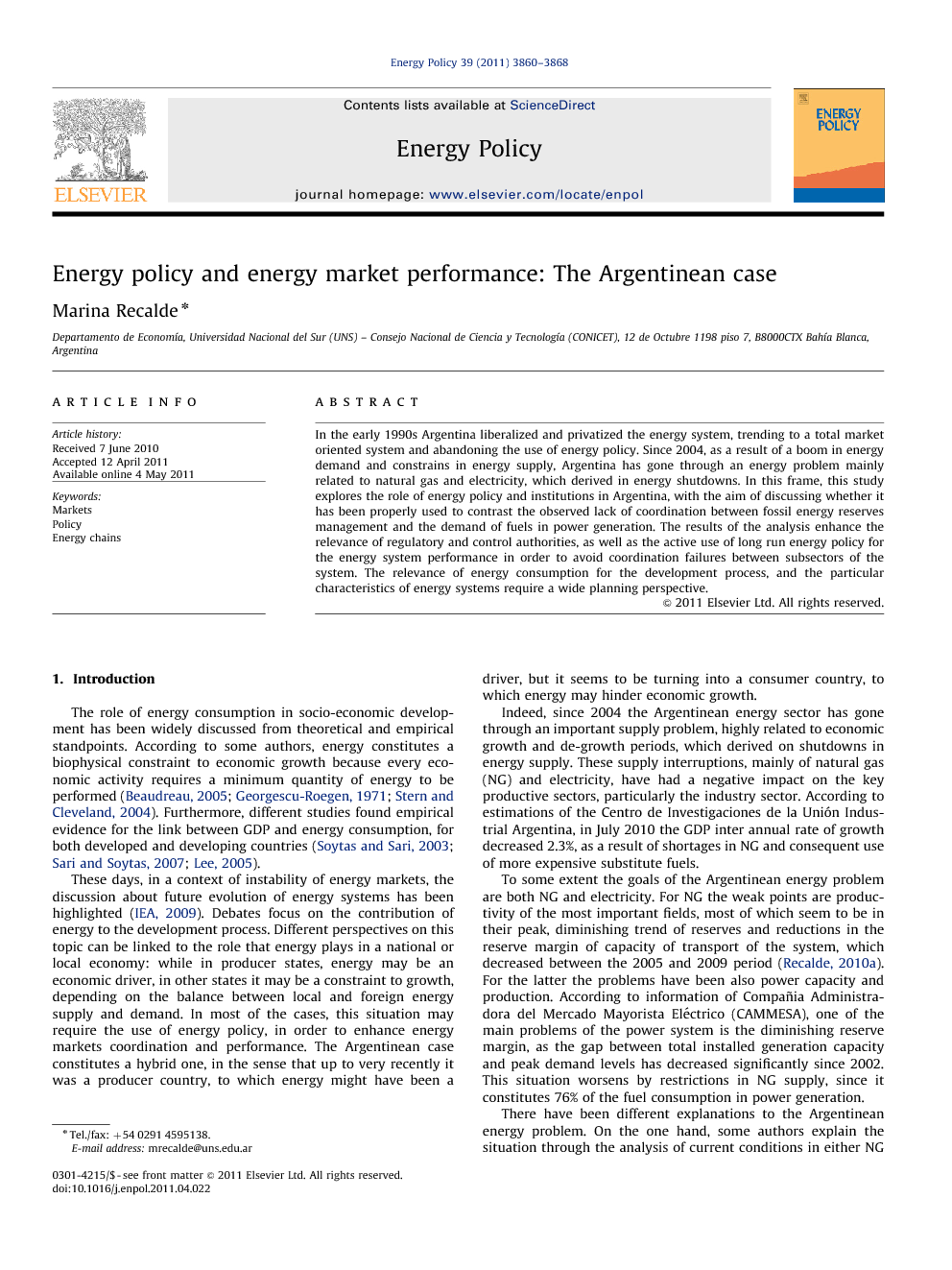 In the early 1990s Argentina liberalized and privatized the energy system, trending to a total market oriented system and abandoning the use of energy policy. Since 2004, as a result of a boom in energy demand and constrains in energy supply, Argentina has gone through an energy problem mainly related to natural gas and electricity, which derived in energy shutdowns. In this frame, this study explores the role of energy policy and institutions in Argentina, with the aim of discussing whether it has been properly used to contrast the observed lack of coordination between fossil energy reserves management and the demand of fuels in power generation. The results of the analysis enhance the relevance of regulatory and control authorities, as well as the active use of long run energy policy for the energy system performance in order to avoid coordination failures between subsectors of the system. The relevance of energy consumption for the development process, and the particular characteristics of energy systems require a wide planning perspective.

The role of energy consumption in socio-economic development has been widely discussed from theoretical and empirical standpoints. According to some authors, energy constitutes a biophysical constraint to economic growth because every economic activity requires a minimum quantity of energy to be performed (Beaudreau, 2005, Georgescu-Roegen, 1971 and Stern and Cleveland, 2004). Furthermore, different studies found empirical evidence for the link between GDP and energy consumption, for both developed and developing countries (Soytas and Sari, 2003, Sari and Soytas, 2007 and Lee, 2005). These days, in a context of instability of energy markets, the discussion about future evolution of energy systems has been highlighted (IEA, 2009). Debates focus on the contribution of energy to the development process. Different perspectives on this topic can be linked to the role that energy plays in a national or local economy: while in producer states, energy may be an economic driver, in other states it may be a constraint to growth, depending on the balance between local and foreign energy supply and demand. In most of the cases, this situation may require the use of energy policy, in order to enhance energy markets coordination and performance. The Argentinean case constitutes a hybrid one, in the sense that up to very recently it was a producer country, to which energy might have been a driver, but it seems to be turning into a consumer country, to which energy may hinder economic growth. Indeed, since 2004 the Argentinean energy sector has gone through an important supply problem, highly related to economic growth and de-growth periods, which derived on shutdowns in energy supply. These supply interruptions, mainly of natural gas (NG) and electricity, have had a negative impact on the key productive sectors, particularly the industry sector. According to estimations of the Centro de Investigaciones de la Unión Industrial Argentina, in July 2010 the GDP inter annual rate of growth decreased 2.3%, as a result of shortages in NG and consequent use of more expensive substitute fuels. To some extent the goals of the Argentinean energy problem are both NG and electricity. For NG the weak points are productivity of the most important fields, most of which seem to be in their peak, diminishing trend of reserves and reductions in the reserve margin of capacity of transport of the system, which decreased between the 2005 and 2009 period (Recalde, 2010a). For the latter the problems have been also power capacity and production. According to information of Compañia Administradora del Mercado Mayorista Eléctrico (CAMMESA), one of the main problems of the power system is the diminishing reserve margin, as the gap between total installed generation capacity and peak demand levels has decreased significantly since 2002. This situation worsens by restrictions in NG supply, since it constitutes 76% of the fuel consumption in power generation. There have been different explanations to the Argentinean energy problem. On the one hand, some authors explain the situation through the analysis of current conditions in either NG or electricity markets. They argue that the key factor to understand this situation is recent energy policy, or industry re-reforms as mentioned by Haselip and Potter (2010), which did not succeed on promoting investment. These authors also insist that economic growth experienced in Argentina from 2004 implied a boom in energy demand that could not be rapidly addressed by private producers (Cont and Navajas, 2004). On the other hand, others insist that the roots of the problem are the changes in the control of energy resources in the early 1990s, the erratic energy policy and private investment from then on. According to these authors, the interrelation between electricity, NG and oil chains, the unpredictable evolution of the institutions and regulation through all the periods, the behavior of private operators and their reintegration and concentration strategies have been crucial to this problem (Campodonico, 2004, Kozulj, 2002, Kozulj, 2004 and Pistonesi, 2001). This paper analyzes the Argentinean energy system, and throughout some points of previous arguments can be found. However, a systemic approach is mainly adopted, using the energy chains framework, from a historical standpoint, to study the performance of the energy system. Along this paper, energy system is defined as “a group of activities which, from an endowment of natural resources, satisfy energy services, both for final consumption and productive activities” (Bouille, 2004, Girord, 1998, Hasson and Pistonesi, 1988 and Kaplinsky and Morris, 2002). Therefore, it can be characterized as a group of energy chains, each one corresponding to a particular source. From a wide point of view, a productive chain describes the “full range of technical, economical and financial activities required to bring a product or service from its origin, through the different phases of production and delivery, to final consumers”. In this sense, in order to analyze the evolution of a productive chain, studying technical relations constitutes a necessary but not a sufficient condition. The historical evolution of the socio-economic conditions will be equally important to learn about the system. In accordance to Haselip and Potter (2010), country-specific contexts are very relevant to its performance and thus the success or failure or an economic model is rooted in the country's own history. As follows, this paper examines some aspects of the performance of Argentinean energy system and energy policy. The aim of the paper is to explore the role of energy policy and institutions in a developing country, such as Argentina, and to discuss if it has been properly used to contrast the observed lack of coordination between fossil energy reserves management and electricity demand which, consequently, may hinder economic development.