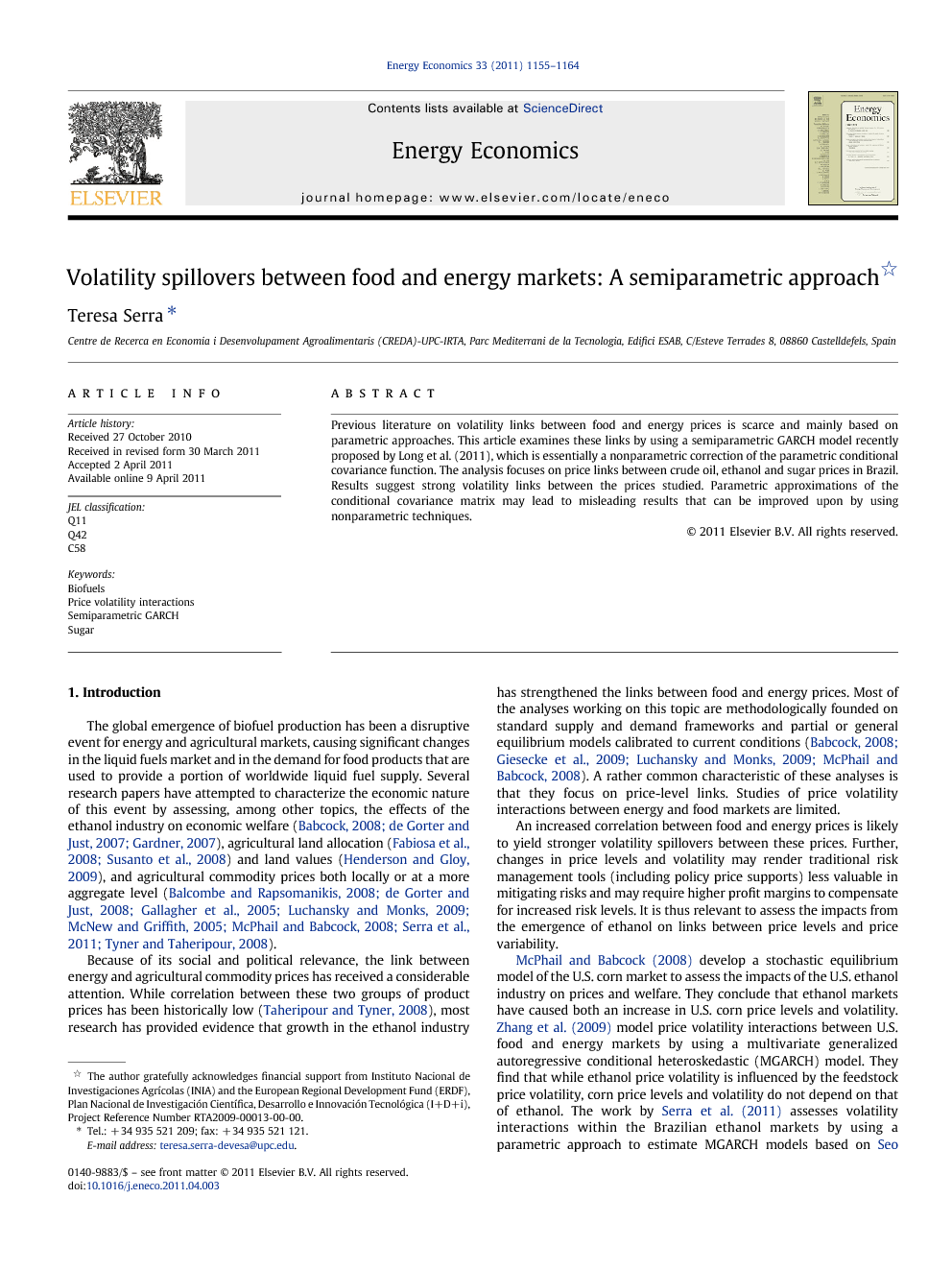 Previous literature on volatility links between food and energy prices is scarce and mainly based on parametric approaches. This article examines these links by using a semiparametric GARCH model recently proposed by Long et al. (2011), which is essentially a nonparametric correction of the parametric conditional covariance function. The analysis focuses on price links between crude oil, ethanol and sugar prices in Brazil. Results suggest strong volatility links between the prices studied. Parametric approximations of the conditional covariance matrix may lead to misleading results that can be improved upon by using nonparametric techniques.

The global emergence of biofuel production has been a disruptive event for energy and agricultural markets, causing significant changes in the liquid fuels market and in the demand for food products that are used to provide a portion of worldwide liquid fuel supply. Several research papers have attempted to characterize the economic nature of this event by assessing, among other topics, the effects of the ethanol industry on economic welfare (Babcock, 2008, de Gorter and Just, 2007 and Gardner, 2007), agricultural land allocation (Fabiosa et al., 2008 and Susanto et al., 2008) and land values (Henderson and Gloy, 2009), and agricultural commodity prices both locally or at a more aggregate level (Balcombe and Rapsomanikis, 2008, de Gorter and Just, 2008, Gallagher et al., 2005, Luchansky and Monks, 2009, McNew and Griffith, 2005, McPhail and Babcock, 2008, Serra et al., 2011 and Tyner and Taheripour, 2008). Because of its social and political relevance, the link between energy and agricultural commodity prices has received a considerable attention. While correlation between these two groups of product prices has been historically low (Taheripour and Tyner, 2008), most research has provided evidence that growth in the ethanol industry has strengthened the links between food and energy prices. Most of the analyses working on this topic are methodologically founded on standard supply and demand frameworks and partial or general equilibrium models calibrated to current conditions (Babcock, 2008, Giesecke et al., 2009, Luchansky and Monks, 2009 and McPhail and Babcock, 2008). A rather common characteristic of these analyses is that they focus on price-level links. Studies of price volatility interactions between energy and food markets are limited. An increased correlation between food and energy prices is likely to yield stronger volatility spillovers between these prices. Further, changes in price levels and volatility may render traditional risk management tools (including policy price supports) less valuable in mitigating risks and may require higher profit margins to compensate for increased risk levels. It is thus relevant to assess the impacts from the emergence of ethanol on links between price levels and price variability. McPhail and Babcock (2008) develop a stochastic equilibrium model of the U.S. corn market to assess the impacts of the U.S. ethanol industry on prices and welfare. They conclude that ethanol markets have caused both an increase in U.S. corn price levels and volatility. Zhang et al. (2009) model price volatility interactions between U.S. food and energy markets by using a multivariate generalized autoregressive conditional heteroskedastic (MGARCH) model. They find that while ethanol price volatility is influenced by the feedstock price volatility, corn price levels and volatility do not depend on that of ethanol. The work by Serra et al. (2011) assesses volatility interactions within the Brazilian ethanol markets by using a parametric approach to estimate MGARCH models based on Seo (2007). They find important volatility spillovers across markets that flow in multiple directions. Both Serra et al., 2011 and Zhang et al., 2009 articles characterize the volatility of multiple economic time-series using parametric MGARCH models that have two characteristic features. First, they assume a normal distribution of the model errors and second, the conditional covariance matrix is assumed to be linear. The literature on economic data volatility has widely rejected the normality assumption (Longin and Solnik, 2001 and Richardson and Smith, 1993). Further, nonlinear patterns in the conditional covariance matrix have been widely observed in the financial literature: while during tumultuous periods, conditional correlations between individual price volatilities tend to be strong, more tranquil periods usually yield lower correlations (Long et al., 2011). Asymmetric volatility responses to positive and negative market shocks have also been identified. Several non-linear volatility functions have been proposed to allow for non-constant, non-linear conditional correlations over time. The works by Capiello et al., 2003, Lai et al., 2009 and Pelletier, 2006, and Silvennoinen and Teräswirta (2005) are built upon parametric nonlinear GARCH models. Nonparametric and semiparametric approximations to GARCH modeling have also been proposed. Audrino (2006) models individual volatilities using nonparametric techniques. The individual volatility estimates are then used in a second stage to estimate the dynamic correlation structure parametrically. Härdle and Tsybakov (1997) propose a nonparametric estimator of univariate volatility functions. Long et al. (2011) recently developed a semiparametric multivariate volatility model. This approach consists of a nonparametric correction of the parametric conditional covariance estimator that is robust to potential misspecifications of the error density and the parametric conditional covariance functional form. Our analysis evaluates volatility interactions between energy and food prices by using the approach by Long et al. (2011). This approach includes two stages. In the first stage, the reliability of a parametric approximation to the conditional covariance functional form is assessed. In the second stage, such parametric estimator is adjusted using a nonparametric correction. The article focuses on the Brazilian ethanol industry. While the U.S. is currently leading worldwide ethanol production, we concentrate on the Brazilian ethanol industry to allow for an assessment of price links within a more consolidated and mature industry, thus yielding more robust results that are less dependent on conjunctural events. This article contributes to the limited literature on volatility interactions between energy and food markets by using a semiparametric method that overcomes two of the most important shortcomings of traditional MGARCH models: the assumption of normally distributed errors and the assumption of linearity of the conditional covariance matrix. In overcoming these two shortcomings, this work is an improvement over the analysis by Serra et al. (2011) who also studied the Brazilian ethanol market using parametric techniques. Global ethanol markets have recently been affected by important market shocks. Worldwide ethanol demand surged in the mid 2000s partly as a result of major U.S. refiners switching oxygenate additives from methyl-tertiary-butyl-ether (MTBE) to ethanol. High crude oil prices also contributed to increased ethanol demand. More recently however, weak oil prices and the global financial crisis undermined investments in ethanol projects and reduced the ethanol-derived demand for feedstocks. The semiparametric model proposed by Long et al. (2011) allows for changing behavior of volatility relationships depending on the state of the world, or the prevailing economic regime.