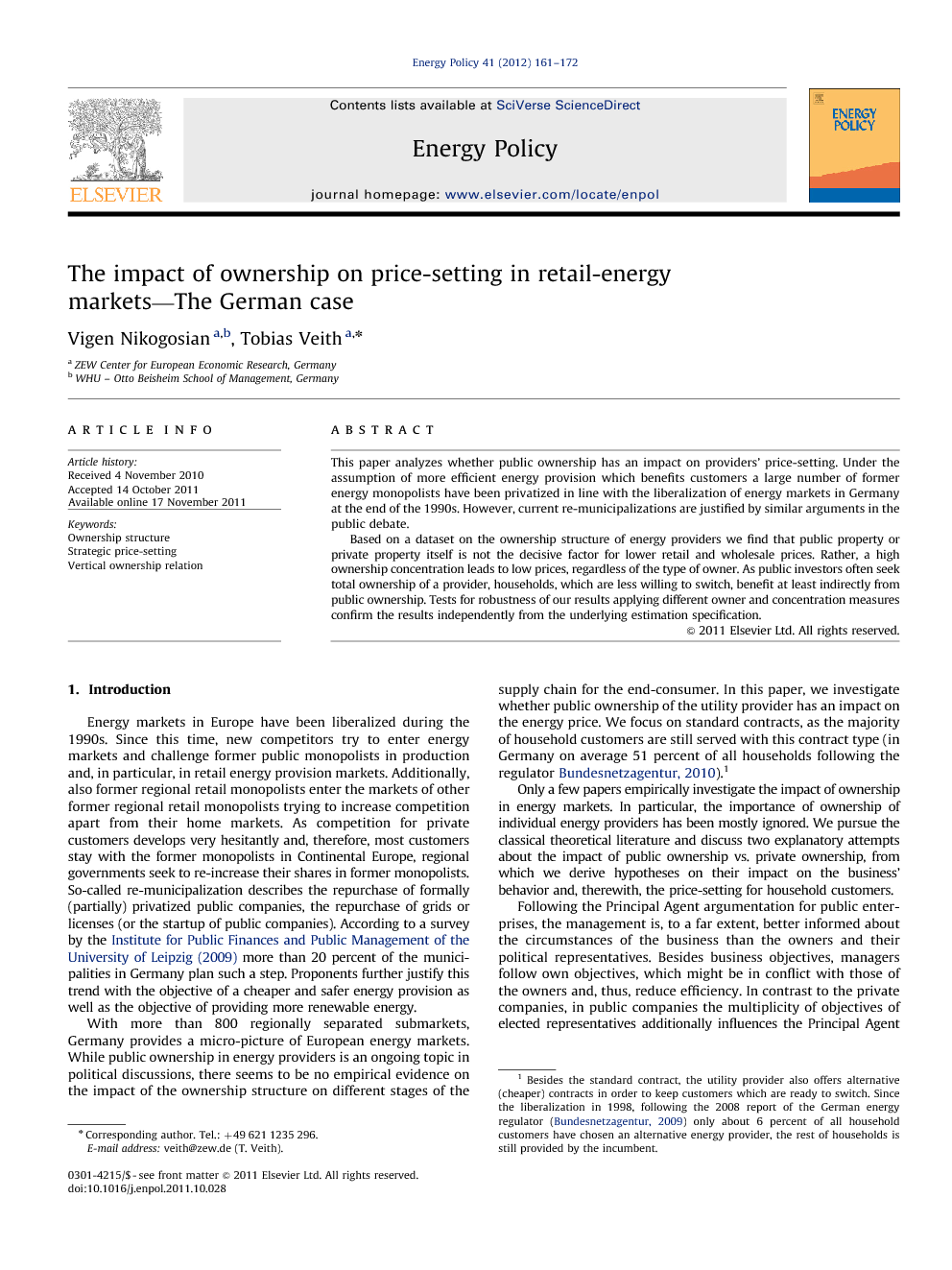 This paper analyzes whether public ownership has an impact on providers' price-setting. Under the assumption of more efficient energy provision which benefits customers a large number of former energy monopolists have been privatized in line with the liberalization of energy markets in Germany at the end of the 1990s. However, current re-municipalizations are justified by similar arguments in the public debate. Based on a dataset on the ownership structure of energy providers we find that public property or private property itself is not the decisive factor for lower retail and wholesale prices. Rather, a high ownership concentration leads to low prices, regardless of the type of owner. As public investors often seek total ownership of a provider, households, which are less willing to switch, benefit at least indirectly from public ownership. Tests for robustness of our results applying different owner and concentration measures confirm the results independently from the underlying estimation specification.

Energy markets in Europe have been liberalized during the 1990s. Since this time, new competitors try to enter energy markets and challenge former public monopolists in production and, in particular, in retail energy provision markets. Additionally, also former regional retail monopolists enter the markets of other former regional retail monopolists trying to increase competition apart from their home markets. As competition for private customers develops very hesitantly and, therefore, most customers stay with the former monopolists in Continental Europe, regional governments seek to re-increase their shares in former monopolists. So-called re-municipalization describes the repurchase of formally (partially) privatized public companies, the repurchase of grids or licenses (or the startup of public companies). According to a survey by the Institute for Public Finances and Public Management of the University of Leipzig (2009) more than 20 percent of the municipalities in Germany plan such a step. Proponents further justify this trend with the objective of a cheaper and safer energy provision as well as the objective of providing more renewable energy. With more than 800 regionally separated submarkets, Germany provides a micro-picture of European energy markets. While public ownership in energy providers is an ongoing topic in political discussions, there seems to be no empirical evidence on the impact of the ownership structure on different stages of the supply chain for the end-consumer. In this paper, we investigate whether public ownership of the utility provider has an impact on the energy price. We focus on standard contracts, as the majority of household customers are still served with this contract type (in Germany on average 51 percent of all households following the regulator Bundesnetzagentur, 2010).1 Only a few papers empirically investigate the impact of ownership in energy markets. In particular, the importance of ownership of individual energy providers has been mostly ignored. We pursue the classical theoretical literature and discuss two explanatory attempts about the impact of public ownership vs. private ownership, from which we derive hypotheses on their impact on the business' behavior and, therewith, the price-setting for household customers. Following the Principal Agent argumentation for public enterprises, the management is, to a far extent, better informed about the circumstances of the business than the owners and their political representatives. Besides business objectives, managers follow own objectives, which might be in conflict with those of the owners and, thus, reduce efficiency. In contrast to the private companies, in public companies the multiplicity of objectives of elected representatives additionally influences the Principal Agent problem: First, managers are more informed than public representatives and, second, elected representatives follow a set of multiple objectives, which provides more degrees of freedom in decisions for managers of public energy companies. As private energy demand is highly price-inelastic (the majority of households has not switched its contracts more than ten years after the liberalization), energy providers can pass on inefficiencies to customers. On the other hand, the question of how ownership concentration has an impact on the behavior of a company is in close connection with the Corporate Governance literature. Following this strand of literature, one should expect that owners with a high involvement are able to enforce their interests over-proportionally in contrast to owners with less involvement and seek, above all, long-term business objectives due to their interest in having a say. In contrast, owners with less involvement have difficulties exerting strategic influence and should therefore rather seek short-term performance objectives with their investments. Transferring these expectations to the particular situation of standard contracts in retail energy markets, companies with a lower ownership concentration should choose higher retail prices ignoring more customers switching to competitive contracts. On the other hand, providers with a higher ownership concentration choose lower retail prices internalizing customers' switching behavior in their price choice. Energy providers have to pay distribution grid operators a regulated charge, the distribution charge, for getting access to retail energy consumers. According to the regulator, this fee determines one fourth of the standard contract price. We approach the analysis of wholesale and retail price influences estimating a two-equation system. To investigate the relevance of indirect effects of distribution grid ownership on end-consumer prices, we choose a simultaneous estimation approach in which we take the distribution charge as an endogenous variable in the price equation. Distribution charges are explained by multiple grid and regional characteristics and the ownership structure of the grid owner. In doing so, we find that the end-consumer price and also the distribution charge do not significantly differ due to public or private ownership. In contrast, using ownership concentration instead of measuring ownership shares, we find that a higher ownership concentration promotes lower prices for end-consumers whereas the distribution charge does not react to ownership concentration. This shows that regulation effectively mitigates ownership influence on the distribution charge. The paper is organized as follows. The next section describes the German electricity sector with a specific focus on regional distribution markets, the average composition of the standard contract price and regional differences. In Section 3, we consider the existing literature and derive hypotheses on the impact of the participation structure and the participation concentration on the retail and the wholesale price. Prior to a multivariate analysis, we provide a comprehensive overview over the data used in Section 4. As coherences concerning proprietary rights in the German energy economy have, to our knowledge, not been scientifically investigated yet, we consider the ownership situation and the relation of the retail incumbent and the grid operator in this section. Afterwards, in Section 5, the results of several multivariate estimation models are considered and compared to each other. Section 6 summarizes the main results and derives policy implications.