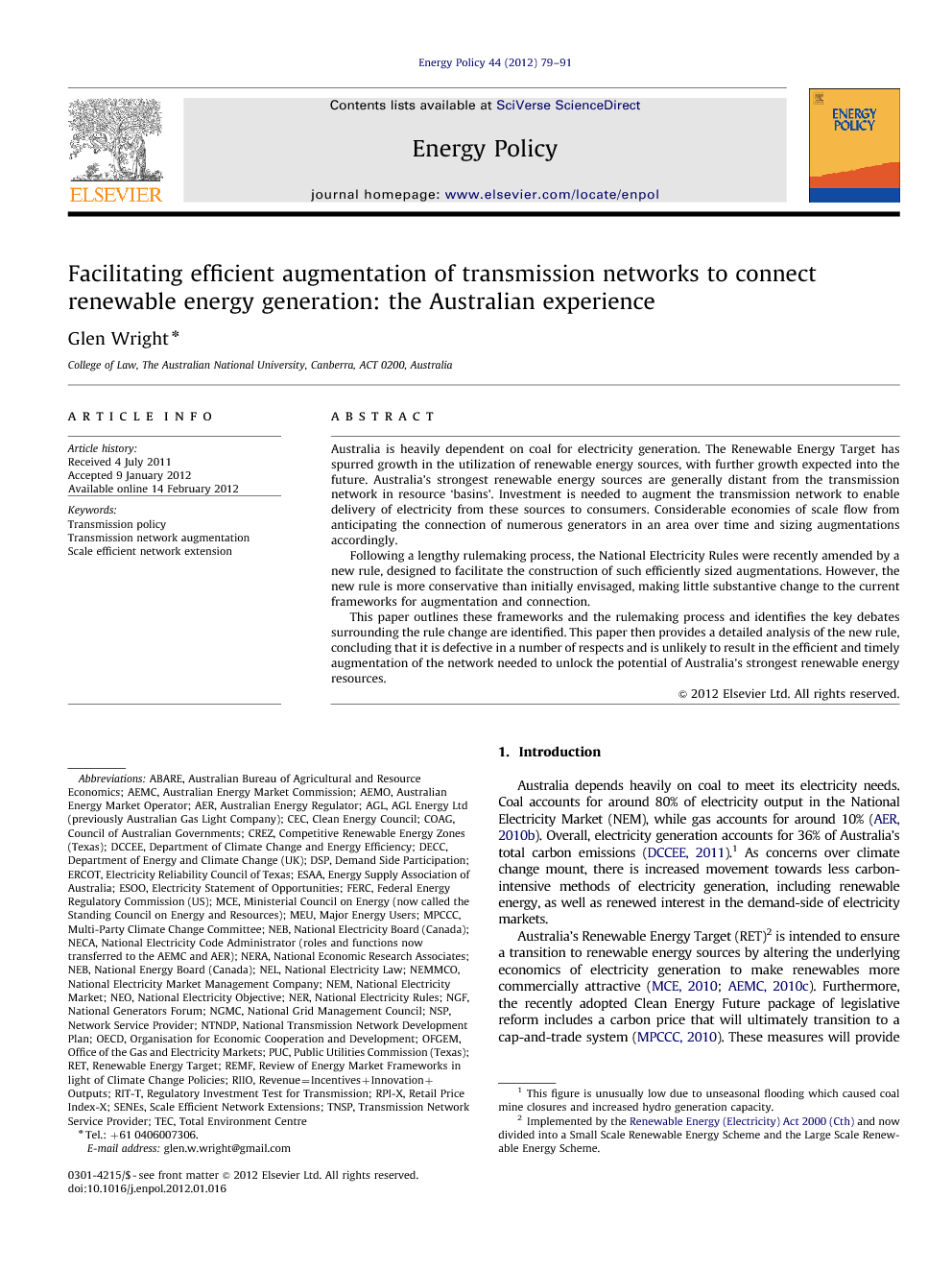 Australia is heavily dependent on coal for electricity generation. The Renewable Energy Target has spurred growth in the utilization of renewable energy sources, with further growth expected into the future. Australia's strongest renewable energy sources are generally distant from the transmission network in resource ‘basins’. Investment is needed to augment the transmission network to enable delivery of electricity from these sources to consumers. Considerable economies of scale flow from anticipating the connection of numerous generators in an area over time and sizing augmentations accordingly. Following a lengthy rulemaking process, the National Electricity Rules were recently amended by a new rule, designed to facilitate the construction of such efficiently sized augmentations. However, the new rule is more conservative than initially envisaged, making little substantive change to the current frameworks for augmentation and connection. This paper outlines these frameworks and the rulemaking process and identifies the key debates surrounding the rule change are identified. This paper then provides a detailed analysis of the new rule, concluding that it is defective in a number of respects and is unlikely to result in the efficient and timely augmentation of the network needed to unlock the potential of Australia's strongest renewable energy resources.

Australia depends heavily on coal to meet its electricity needs. Coal accounts for around 80% of electricity output in the National Electricity Market (NEM), while gas accounts for around 10% (AER, 2010b). Overall, electricity generation accounts for 36% of Australia's total carbon emissions (DCCEE, 2011).1 As concerns over climate change mount, there is increased movement towards less carbon-intensive methods of electricity generation, including renewable energy, as well as renewed interest in the demand-side of electricity markets. Australia's Renewable Energy Target (RET)2 is intended to ensure a transition to renewable energy sources by altering the underlying economics of electricity generation to make renewables more commercially attractive (MCE, 2010 and AEMC, 2010c). Furthermore, the recently adopted Clean Energy Future package of legislative reform includes a carbon price that will ultimately transition to a cap-and-trade system (MPCCC, 2010). These measures will provide a disincentive to carbon-intensive electricity generation and likely further increase the utilization of renewable energy. As with all electricity generation, renewable energy power stations must be connected to the transmission network (Network) in order to transmit electricity to the distribution network and to end consumers. Australia's Network has developed alongside the coal industry. As a result, the transmission network is close to coal resources, but distant from the best renewable energy sources. In addition, the present regulatory framework is geared toward infrequent connection requests from large coal-fired power stations, but ill-suited to clustered generation, i.e. the connection of multiple smaller generations in the same area over time. The Australian Energy Market Commission (AEMC), the rule-making body of the NEM, has developed a rule change to the National Electricity Rules (NER or the Rules)3 to facilitate the construction of suitably sized extensions to the Network that will accommodate clusters of renewable energy generators in a geographic area over time. Such a rule is intended to enable the exploitation of the economies of scale that flow from building an efficiently sized augmentation, rather than a number of separate augmentations for each generator. Such augmentations have been termed ‘Scale Efficient Network Extensions’ (SENEs), though some have colorfully referred to them as ‘fields of dreams’ (ESAA, 2011). The AEMC first suggested a SENEs rule in its Review of Energy Market Frameworks in Light of Climate Change Policies (REMF) (AEMC, 2009; Fig. 1). On 30 June 2011, the AEMC issued the National Electricity Amendment (Scale Efficient Network Extensions) Rule 2011 (Final Rule), which implemented a very different approach to the concept initially envisaged. In this paper I will give a brief contextual overview of the electricity market in Australia and discuss the current regulatory regime for the connection to, and augmentation of, the Network. I will identify the inefficiencies that flow from this framework and argue that amendments to the framework are needed. This paper summarizes the rule change process and identifies the stakeholders and their responses to the proposal. It assesses whether the Final Rule is apt to address the issues facing investment in transmission infrastructure in the context of a changing electricity system. I conclude that the Final Rule is not apt for this purpose. Two international examples of differing approaches to this problem will be outlined and I will propose a more suitable option for Australia's National Electricity Market. This proposal would grant ownership rights over any infrastructure built to the builder, giving investors certainty that they will be able to secure a return on their investment. I also suggest that electricity market regulation more broadly needs to become more responsive to environmental and social concerns and that a narrow economic rationalist approach is inadequate to meet the challenges that electricity networks are facing. Finally, the paper identifies some lessons that can be learned from Australia's experience.