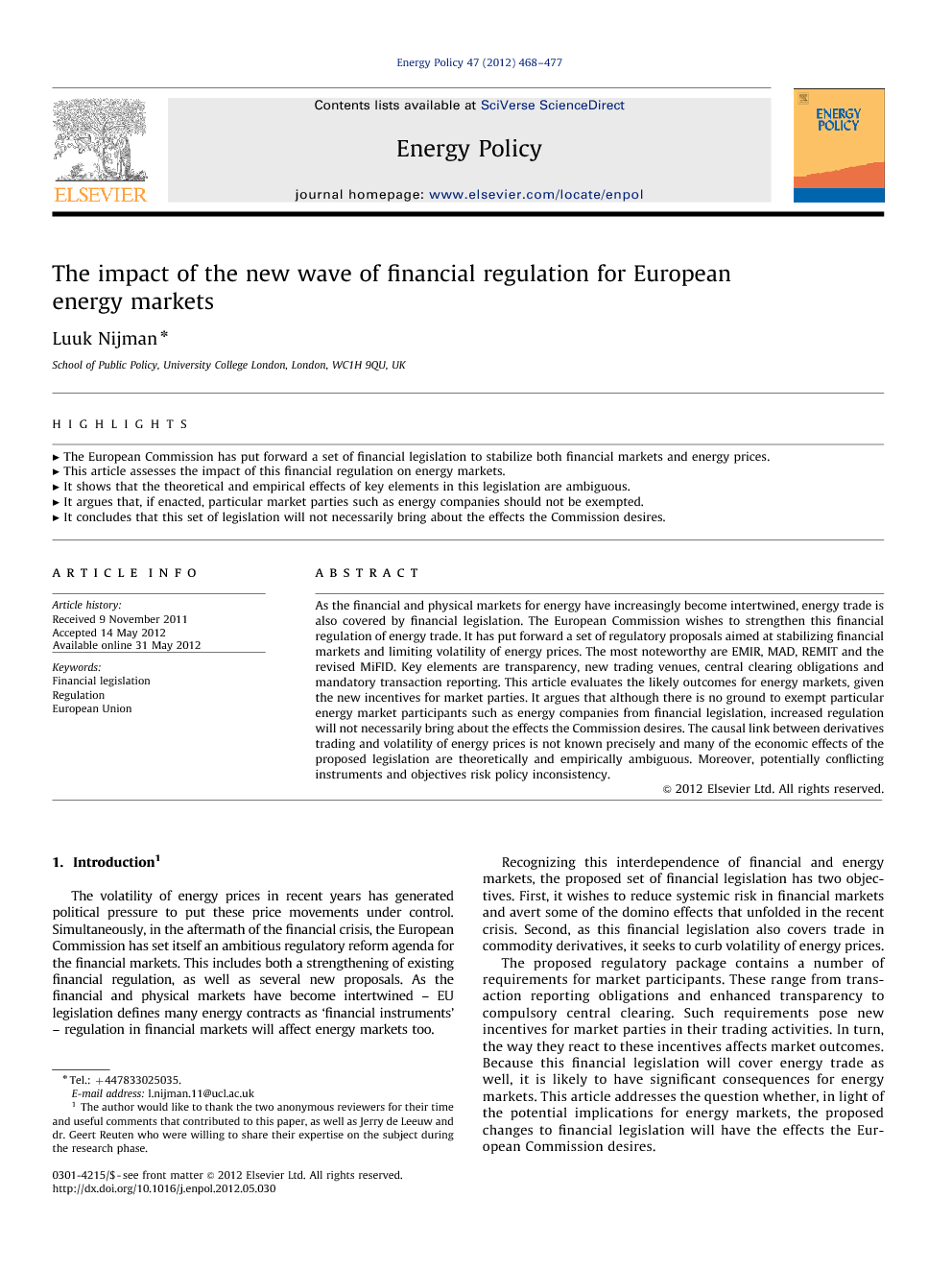 As the financial and physical markets for energy have increasingly become intertwined, energy trade is also covered by financial legislation. The European Commission wishes to strengthen this financial regulation of energy trade. It has put forward a set of regulatory proposals aimed at stabilizing financial markets and limiting volatility of energy prices. The most noteworthy are EMIR, MAD, REMIT and the revised MiFID. Key elements are transparency, new trading venues, central clearing obligations and mandatory transaction reporting. This article evaluates the likely outcomes for energy markets, given the new incentives for market parties. It argues that although there is no ground to exempt particular energy market participants such as energy companies from financial legislation, increased regulation will not necessarily bring about the effects the Commission desires. The causal link between derivatives trading and volatility of energy prices is not known precisely and many of the economic effects of the proposed legislation are theoretically and empirically ambiguous. Moreover, potentially conflicting instruments and objectives risk policy inconsistency.

The volatility of energy prices in recent years has generated political pressure to put these price movements under control. Simultaneously, in the aftermath of the financial crisis, the European Commission has set itself an ambitious regulatory reform agenda for the financial markets. This includes both a strengthening of existing financial regulation, as well as several new proposals. As the financial and physical markets have become intertwined – EU legislation defines many energy contracts as ‘financial instruments’ – regulation in financial markets will affect energy markets too. Recognizing this interdependence of financial and energy markets, the proposed set of financial legislation has two objectives. First, it wishes to reduce systemic risk in financial markets and avert some of the domino effects that unfolded in the recent crisis. Second, as this financial legislation also covers trade in commodity derivatives, it seeks to curb volatility of energy prices. The proposed regulatory package contains a number of requirements for market participants. These range from transaction reporting obligations and enhanced transparency to compulsory central clearing. Such requirements pose new incentives for market parties in their trading activities. In turn, the way they react to these incentives affects market outcomes. Because this financial legislation will cover energy trade as well, it is likely to have significant consequences for energy markets. This article addresses the question whether, in light of the potential implications for energy markets, the proposed changes to financial legislation will have the effects the European Commission desires. This question derives its relevance from three aspects. First, the academic literature has generally focussed on the appropriate regulatory design for specific markets, for instance in relation to the liberalization of European energy markets or the stability of financial markets. As also noted by Diaz-Rainey et al. (2011), little research has been done regarding cross-market effects of financial regulation on energy markets. Now that the line between the traditional financial and energy markets has become blurred, the link between the two deserves more attention. Second, it may prove useful not just to point out which aspects of energy trading may come under financial regulation, but to take the analysis one step further and examine how participants in the energy markets are likely to react to the incentives this new legislation offers them. The success of regulation hinges on how market participants adapt their behaviour to it, not just the substance of the legislation itself. Third, to the extent that these proposals are motivated by electoral calls for a strong response to financial instability and energy price volatility, whether or not they will actually bring this about may have political ramifications as well. Methodologically, the research question will be addressed as follows. As a first step, the legislative proposals, regulations and directives in question will be analysed to sketch the proposed legal framework and distil the most relevant aspects for energy trading parties. Second, the economic literature is drawn upon to assess the theoretical and empirical consequences for market conditions of these regulatory changes. As the aim of the article is to invoke a number of potential market effects to be evaluated empirically in later work, no particular model or theoretical framework is employed at this point. Although in this article the focus will be on energy, with the utilities serving the retail markets for electricity and natural gas as the main concern, the intertwining of the physical and financial markets has also involved other types of commodities too.2 The new financial legislation aims to step up regulation of trading in commodity derivatives as a whole. Some of the conclusions therefore also apply to the markets for other commodities than energy. This article will proceed as follows. Section two will illustrate the intertwinement of physical and financial markets and the rationale to step up regulation. The third section will outline the recent wave of (financial) legislation that would apply to energy markets. Section four will point out how key elements in this legislation will affect market participants and how their reactions could in turn impact market outcomes. The subsequent section will assess whether these outcomes are in line with the objectives set out by the Commission. In other words, is the proposed regulatory package the appropriate instrument to achieve the Commission's goals? A final section concludes.