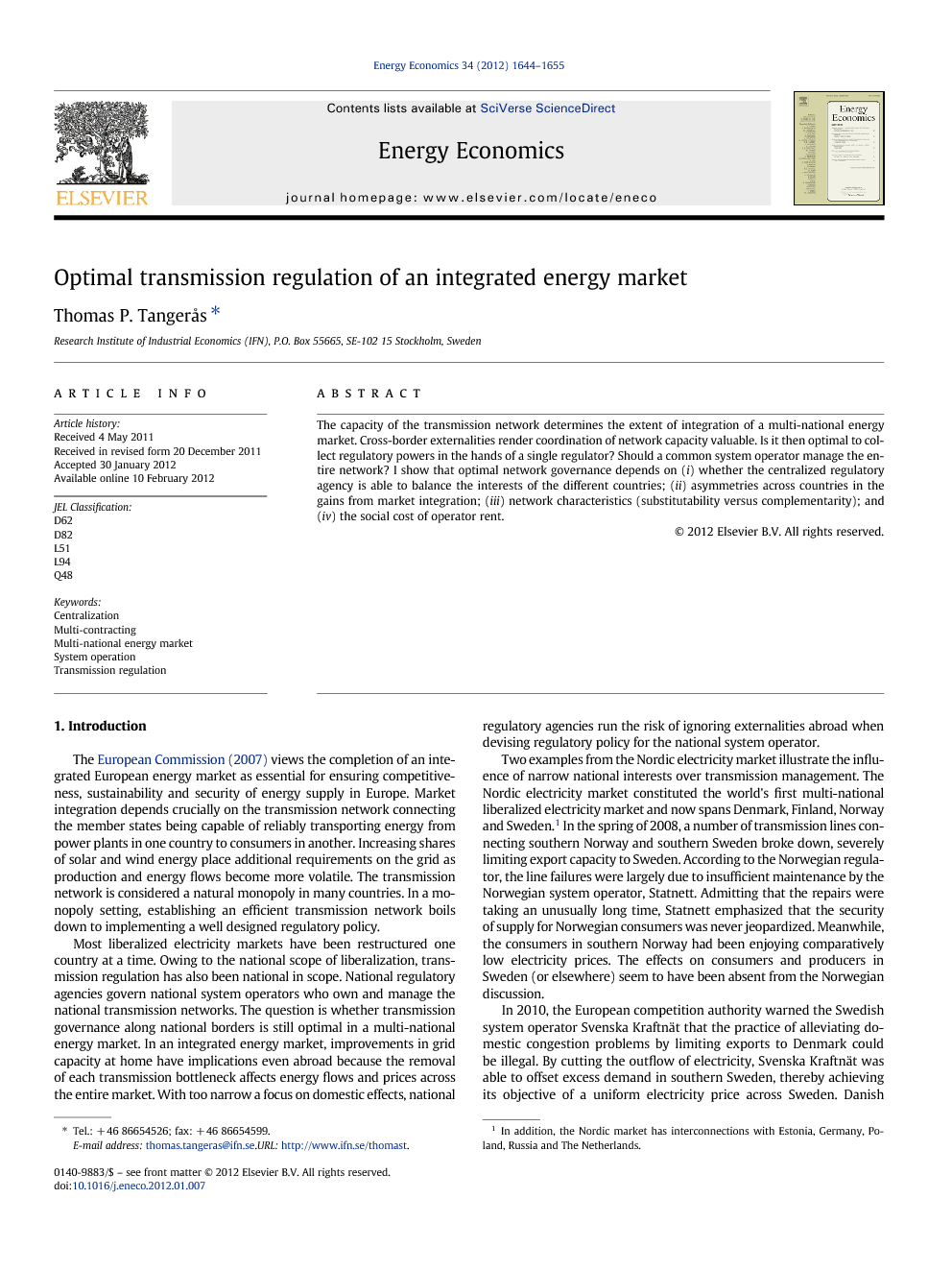 The capacity of the transmission network determines the extent of integration of a multi-national energy market. Cross-border externalities render coordination of network capacity valuable. Is it then optimal to collect regulatory powers in the hands of a single regulator? Should a common system operator manage the entire network? I show that optimal network governance depends on (i) whether the centralized regulatory agency is able to balance the interests of the different countries; (ii) asymmetries across countries in the gains from market integration; (iii) network characteristics (substitutability versus complementarity); and (iv) the social cost of operator rent.

No network governance structure does uniformly better and no governance structure performs uniformly worse than all others in this model. Rather, optimal governance depends on (i) political factors, i.e., how well the common regulatory agency is set up to balance the economic interests of the different countries; (ii) technological factors, i.e., network substitutability versus complementarity; (iii) economic factors, i.e., how the gains from energy market integration vary across countries, and the social cost of operator rent. Having a common regulatory agency is better from a welfare perspective than maintaining national regulatory agencies on the proviso that political influence is sufficiently balanced across the countries participating in the common regulatory agency. With an equal distribution of political power, no country can exert enough influence over regulatory policy to tilt it in one's own favor. The importance of balanced political influence is well understood by the European Union. The Board of Regulators of the Agency for the Cooperation of Energy Regulators (ACER) resides under instructions to act independently from any government of a member state. Only one representative per member state may be admitted to the Board of Regulators, and the board members have one vote each (EU, 2009a). With balanced political influence, the preferences of the regulator are aligned with those of the benevolent social planner. Under those conditions, a common system operator is socially optimal when there are negative rent externalities associated with under-performance, whereas splitting network operation is socially optimal if the rent externalities are positive. For an illustrative example of a positive rent externality, recall the capacity problems between Norway and Sweden described in the Introduction. In May 2008, precisely when the interconnections between southern Norway and southern Sweden failed, the NorNed cable connecting southern Norway and the Netherlands went operational. The longest submarine power cable in the world, NorNed was a prestige project for its owners Statnett and TenneT (the Dutch system operator). Reduced export capacity from southern Norway to southern Sweden, combined with a large electricity surplus that year, pushed down prices in southern Norway and increased the value of electricity trade between the Netherlands and southern Norway. Being the only transmission line directly connecting the two markets, NorNed could sell its transmission capacity at a vastly higher price than projected (Statnett, 2008). Statnett probably internalized part of the increased profitability of the NorNed cable resulting from reduced capacity on its Norwegian–Swedish interconnection. The perceived value of repairing the Norwegian–Swedish connection might have been higher had NorNed instead been fully owned by TenneT, or had the interconnection broken down on the Swedish instead of the Norwegian side of the border. Whether the repairs would have been carried out more expediently under different ownership of the interconnections, remains a matter of speculation.