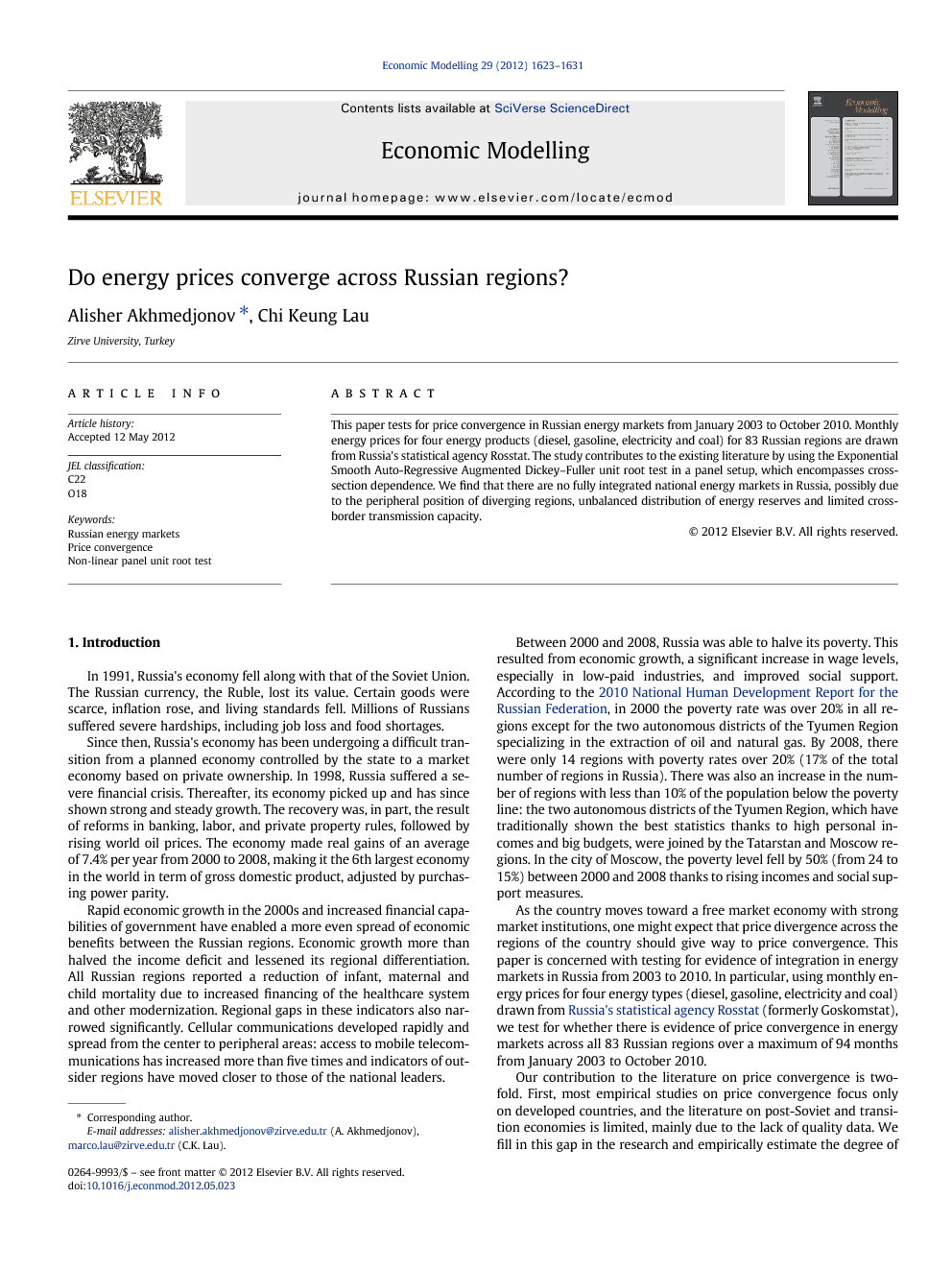 This paper tests for price convergence in Russian energy markets from January 2003 to October 2010. Monthly energy prices for four energy products (diesel, gasoline, electricity and coal) for 83 Russian regions are drawn from Russia's statistical agency Rosstat. The study contributes to the existing literature by using the Exponential Smooth Auto-Regressive Augmented Dickey–Fuller unit root test in a panel setup, which encompasses cross-section dependence. We find that there are no fully integrated national energy markets in Russia, possibly due to the peripheral position of diverging regions, unbalanced distribution of energy reserves and limited cross-border transmission capacity.

In 1991, Russia's economy fell along with that of the Soviet Union. The Russian currency, the Ruble, lost its value. Certain goods were scarce, inflation rose, and living standards fell. Millions of Russians suffered severe hardships, including job loss and food shortages. Since then, Russia's economy has been undergoing a difficult transition from a planned economy controlled by the state to a market economy based on private ownership. In 1998, Russia suffered a severe financial crisis. Thereafter, its economy picked up and has since shown strong and steady growth. The recovery was, in part, the result of reforms in banking, labor, and private property rules, followed by rising world oil prices. The economy made real gains of an average of 7.4% per year from 2000 to 2008, making it the 6th largest economy in the world in term of gross domestic product, adjusted by purchasing power parity. Rapid economic growth in the 2000s and increased financial capabilities of government have enabled a more even spread of economic benefits between the Russian regions. Economic growth more than halved the income deficit and lessened its regional differentiation. All Russian regions reported a reduction of infant, maternal and child mortality due to increased financing of the healthcare system and other modernization. Regional gaps in these indicators also narrowed significantly. Cellular communications developed rapidly and spread from the center to peripheral areas: access to mobile telecommunications has increased more than five times and indicators of outsider regions have moved closer to those of the national leaders. Between 2000 and 2008, Russia was able to halve its poverty. This resulted from economic growth, a significant increase in wage levels, especially in low-paid industries, and improved social support. According to the 2010 National Human Development Report for the Russian Federation, in 2000 the poverty rate was over 20% in all regions except for the two autonomous districts of the Tyumen Region specializing in the extraction of oil and natural gas. By 2008, there were only 14 regions with poverty rates over 20% (17% of the total number of regions in Russia). There was also an increase in the number of regions with less than 10% of the population below the poverty line: the two autonomous districts of the Tyumen Region, which have traditionally shown the best statistics thanks to high personal incomes and big budgets, were joined by the Tatarstan and Moscow regions. In the city of Moscow, the poverty level fell by 50% (from 24 to 15%) between 2000 and 2008 thanks to rising incomes and social support measures. As the country moves toward a free market economy with strong market institutions, one might expect that price divergence across the regions of the country should give way to price convergence. This paper is concerned with testing for evidence of integration in energy markets in Russia from 2003 to 2010. In particular, using monthly energy prices for four energy types (diesel, gasoline, electricity and coal) drawn from Russia's statistical agency Rosstat (formerly Goskomstat), we test for whether there is evidence of price convergence in energy markets across all 83 Russian regions over a maximum of 94 months from January 2003 to October 2010. Our contribution to the literature on price convergence is two-fold. First, most empirical studies on price convergence focus only on developed countries, and the literature on post-Soviet and transition economies is limited, mainly due to the lack of quality data. We fill in this gap in the research and empirically estimate the degree of price convergence in the Russian energy markets using panel data obtained from Rosstat. Second, and more importantly, it tests the convergence hypothesis using a nonlinear panel unit root test as advocated by Cerrato et al. (2009). This novel econometric technique is preferred in modeling price convergence both due to its sound theoretical base and estimation power. The results show evidence of price divergence in the Russian energy markets from 2003 to 2010. The remainder of the paper is organized as follows. The next section provides a brief overview of the existing literature on price convergence and market integration, with special reference to Russia. Section 3 presents a theoretical and econometrical framework as well as the data used for the analysis. Empirical results are presented in 4 and 5 concludes the study.

In this study, we tested for energy price convergence across Russian regions during the period of 2003 to 2010. We find no evidence of price convergence in the Russian energy markets during this time. This is likely because of the peripheral position of the diverging regions, unbalanced distribution of energy reserves and limited cross-border transmission capacity. As a result, transportation plays an important role in the final user price formation of these commodities due to huge long-distance transportation cost. Therefore, reforms of the transportation sector, particularly the railway, may become a major determinant in the process of price convergence for energy prices across markets and regions in Russia. The results suggest that the Russian energy markets have yet to undergo major changes in order to become more integrated. However, we are hesitant to generalize our findings to other markets, because it is possible for other markets to become closely integrated. Rather, we view our findings as evidence of little progress that Russia has made towards integrating its energy markets during the last decades of transition.