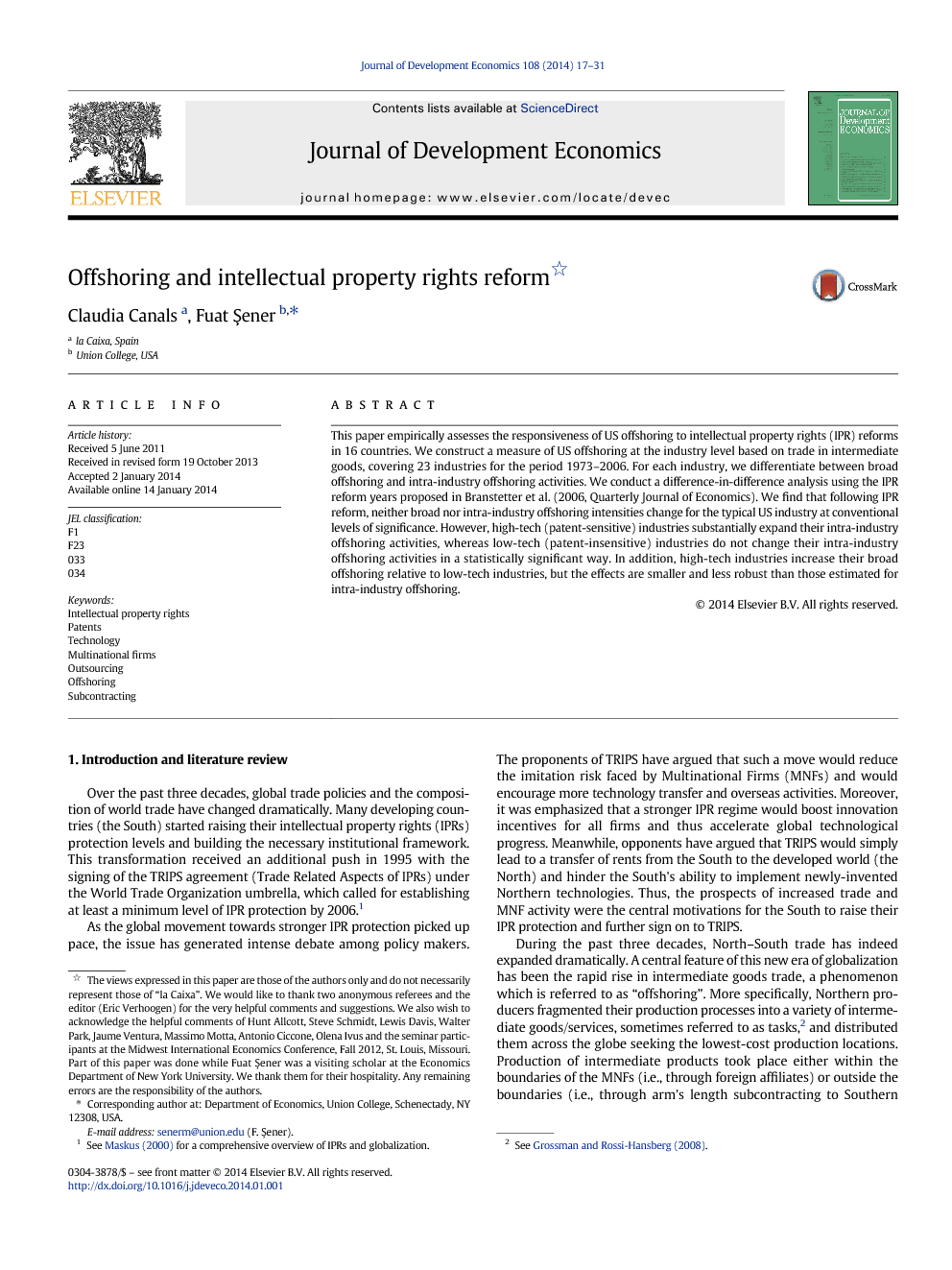 Over the last three decades, world trade, and particularly, trade in intermediate goods and offshoring between North and South economies have increased dramatically. A large body of the economics literature has proposed several reasons for these trends in trade and offshoring (such as decreases in transportation costs, large improvements on ITC technologies, and growth in income levels). However, only a few studies have empirically investigated the impact of IPR regime changes on trade and multinational activities, and none of them have focused on the response of offshoring (which includes third-party contractual relationships in addition to within-multinational activities). Our paper empirically assesses the responsiveness of offshoring to Southern IPR reforms. In order to do so, we first construct a measure of US offshoring intensity at the industry level (for 23 manufacturing industries) mapped against the trading partners of US (16 economies). We construct two measures. The first, is broad offshoring intensity, which measures the value of intermediate goods that a US industry imports from all industries of a given country to produce one dollar worth of value. The second is intra-industry offshoring intensity, which considers the value of imported goods when US industry imports from the same industry abroad. Then, we employ a difference-in-difference approach and regress our offshoring intensity variables on a Reform dummy which identifies the timing of IPR reform for each country. In our specifications, we differentiate between high-tech industries and low-tech industries and control for several country, time and industry characteristics. We find that following IPR reform, a typical US industry offshoring to our sample of 16 countries does not increase its broad offshoring intensity or its intra-industry offshoring intensity at conventional significance levels. However, a differential response emerges when we distinguish between high-tech and low-tech industries. In particular, we find strong evidence for high-tech industries substantially increasing their intra-industry offshoring activities and some evidence for the same industries increasing broad offshoring activities following IPR reform. We did not find any statistically significant evidence for increased offshoring by low-tech industries. In both empirical approaches that we utilized, the difference-in-difference specifications and the event study analysis, we find that intra-industry offshoring effects for high-tech industries are much larger and more robust than broad offshoring effects. Further questions still remain to be explored in the context of IPR reform and offshoring. As noted in Section 2, our IPR reform dummy is a binary variable which obviously misses the possible heterogeneity across countries and also across industries. Future research can investigate this issue by coding up industry-specific patent laws across countries. Another natural follow up to our study can involve looking into the response of offshoring to IPR reform in countries other than the US. For many OECD countries, input–output tables and bilateral trade information exist to render such studies feasible.