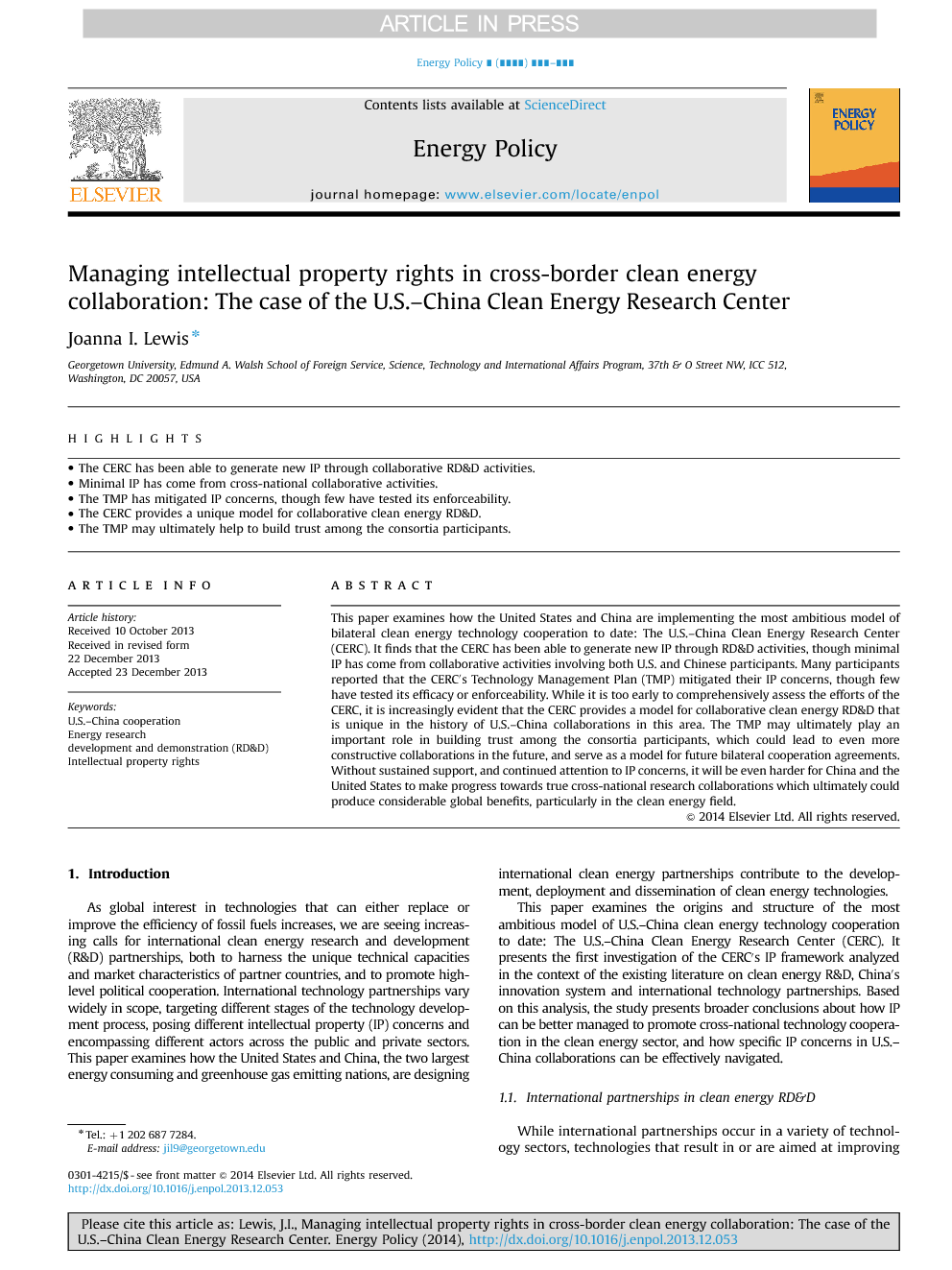 This paper examines how the United States and China are implementing the most ambitious model of bilateral clean energy technology cooperation to date: The U.S.–China Clean Energy Research Center (CERC). It finds that the CERC has been able to generate new IP through RD&D activities, though minimal IP has come from collaborative activities involving both U.S. and Chinese participants. Many participants reported that the CERC's Technology Management Plan (TMP) mitigated their IP concerns, though few have tested its efficacy or enforceability. While it is too early to comprehensively assess the efforts of the CERC, it is increasingly evident that the CERC provides a model for collaborative clean energy RD&D that is unique in the history of U.S.–China collaborations in this area. The TMP may ultimately play an important role in building trust among the consortia participants, which could lead to even more constructive collaborations in the future, and serve as a model for future bilateral cooperation agreements. Without sustained support, and continued attention to IP concerns, it will be even harder for China and the United States to make progress towards true cross-national research collaborations which ultimately could produce considerable global benefits, particularly in the clean energy field.

As global interest in technologies that can either replace or improve the efficiency of fossil fuels increases, we are seeing increasing calls for international clean energy research and development (R&D) partnerships, both to harness the unique technical capacities and market characteristics of partner countries, and to promote high-level political cooperation. International technology partnerships vary widely in scope, targeting different stages of the technology development process, posing different intellectual property (IP) concerns and encompassing different actors across the public and private sectors. This paper examines how the United States and China, the two largest energy consuming and greenhouse gas emitting nations, are designing international clean energy partnerships contribute to the development, deployment and dissemination of clean energy technologies. This paper examines the origins and structure of the most ambitious model of U.S.–China clean energy technology cooperation to date: The U.S.–China Clean Energy Research Center (CERC). It presents the first investigation of the CERC's IP framework analyzed in the context of the existing literature on clean energy R&D, China's innovation system and international technology partnerships. Based on this analysis, the study presents broader conclusions about how IP can be better managed to promote cross-national technology cooperation in the clean energy sector, and how specific IP concerns in U.S.–China collaborations can be effectively navigated.

The CERC begins to shed some light on the question of how IP can be better managed to promote cross-national technology cooperation in the clean energy sector. While the CERC is still in its early stages, the above analysis of the CERC's IP framework highlights some of the unique characteristics of the model for collaborative clean energy research that it has established, as well as a range of expectations about what the CERC can and will achieve. Many CERC participants reported that they had initially joined the initiative because they believed the IP framework could be beneficial to their continued work in China, although they did not expect that the TMP would solve all of their IP challenges. Several private companies involved in the CERC mentioned tangible results from their participation, including new business ventures, and new IP. By mid-2013, all of the CERC consortia had reported inventions and IP resulting from CERC R&D initiatives. Almost all of the U.S. commercial participants across the three consortia mentioned that one of the biggest advantages of participating in the CERC was to gain leverage for technology demonstration projects (Spegele, 2011). Many have invested their own money in the collaborations taking place under the CERC far in excess of government support because government involvement provided leverage for project approvals, and many CERC collaborations were perceived to have current or future commercial value. On the Chinese side, there has been a discernable focus on producing tangible metrics with potential commercial value such as patents, reflecting the incentives put in place by the government agencies running the CERC. This is likely reflected in the large number of patents that have been filed by Chinese CERC participants in contrast with filings by U.S. participants. While it is too early to comprehensively assess the efforts of the CERC, it is increasingly evident that the CERC provides a model for collaborative clean energy research, development and demonstration (RD&D) that is unique in the history of U.S.–China collaborations in this area. Spanning the public and private sectors and involving top researchers from universities and national laboratories in both countries, the CERC has also been credited with propelling numerous other clean energy collaborations, including some with potentially large commercial value. The scale of the CERC is extremely impressive, and it is clearly building important clean energy-focused research partnerships between China and the United States. Where the CERC is falling short, however, is in providing a model for Sino-U.S. R&D collaboration that generates truly collaborative inventions. Despite the innovative model of IP management encompassed in the CERC's TMP, the TMP has not yet proven to provide sufficient assurance to CERC participants to alleviate all of their concerns related to IP protection concerns. While the CERC is indeed producing inventions, many of which are jointly developed among CERC consortia members from academia, research institutes and industry, and is in some cases encouraging the co-filing of patents in both China and the United States, it is not yet producing inventions that were jointly developed by U.S. and Chinese participants, or IP rights that are jointly held by entities in both the United States and China. It is evident from all three CERC consortia that collaboration is easier in the basic research stage and in the demonstration stage than in the R&D stage at which IP is frequently generated. Even if the CERC is not yet meeting all of its expectations with respect to IP creation, as the first U.S.–China program targeting clean energy R&D, it may ultimately play an important role in building trust among the consortia participants, which could lead to even more constructive collaborations in the future. IP concerns are diverse and complex, and are often based on perceptions of risk which may or may not reflect actual risk. Only when both actual and perceived risks are understood and mitigated can a constructive environment for collaboration be achieved. As a result, it is important that both governments continue to support the CERC's collaborative research programs, even as IP concerns persist. Without sustained support, and continued attention to IP concerns, it will be even harder for China and the United States to make progress towards developing true cross-national research collaborations which ultimately could produce considerable global benefits, particularly in the clean energy field. The CERC experience provides some useful insight about improvements that are still needed in order to effectively navigate IP concerns specific to U.S.–China collaborations. There is still clearly a need to better alleviate the concerns of the participants related to IP protections, as well as to better educate researchers about how to use legal tools like the TMP to better facilitate collaborative research endeavors. Rather than attempt to navigate complicated IP issues, researchers not trained in IP law are more likely to avoid IP negotiations, even at the expense of potentially valuable cross-border collaborations, unless they are confident that they have institutional support. The CERC case can also serve as a model for changing the way in which researchers are trained to understand the risks and benefits associated with collaborative research. While most research institutions have legal teams and technology transfer offices, the majority of researchers interact with these offices only when absolutely necessary, and often when it is too late – for example when an IP violation has already occurred. An approach like the one that has been adopted by the CERC through its TMP and IP training activities that both educates researchers and technology transfer offices about the benefits of cross-border research collaborations as well as the associated legal procedures, may help to encourage a more constructive and proactive relationship among researchers and begin to create an environment in which international research collaborations can succeed.