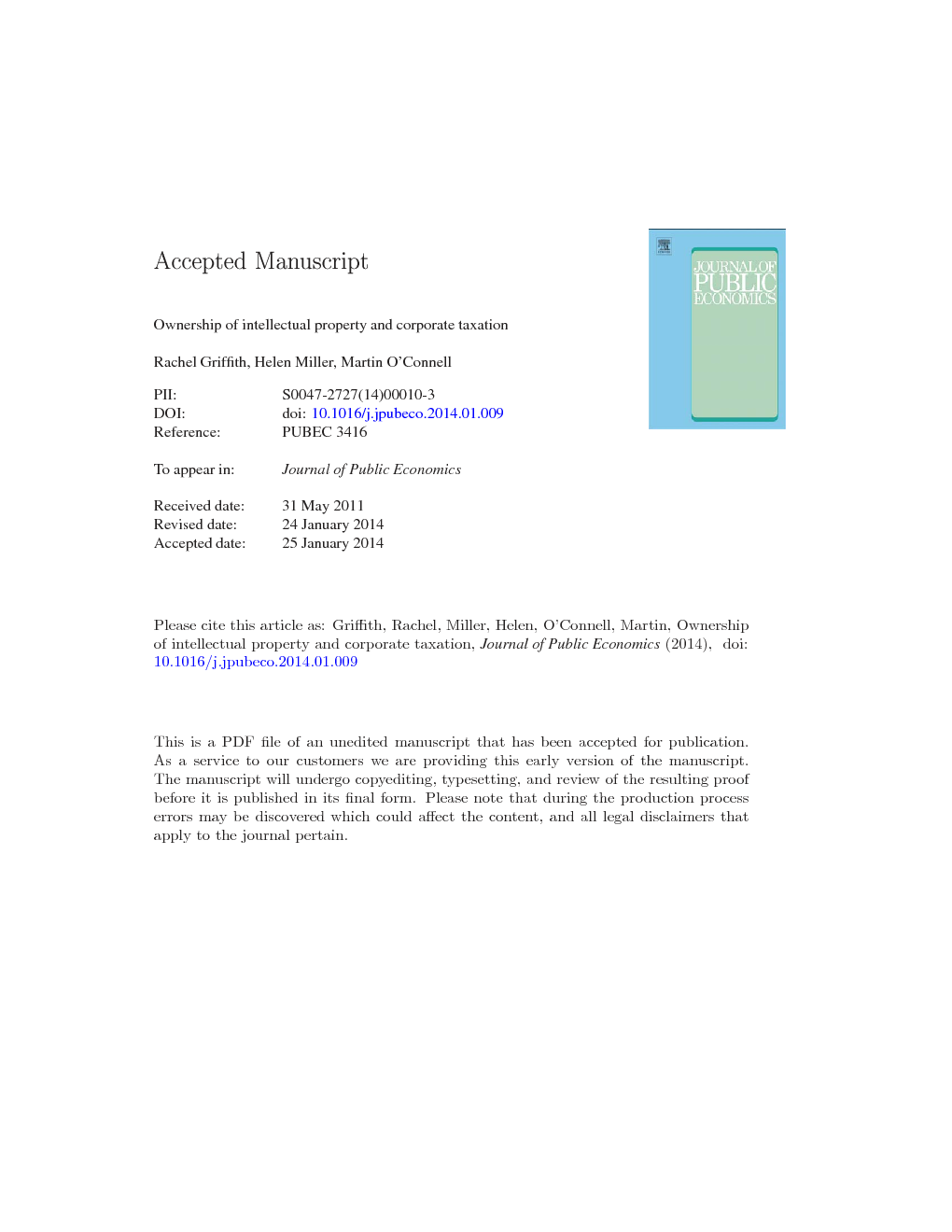 Intellectual property accounts for a growing share of firms' assets. It is more mobile than other forms of capital, and could be used by firms to shift income offshore and to reduce their corporate income tax liability. We consider how influential corporate income taxes are in determining where firms choose to legally own intellectual property. We estimate a mixed (or random coefficients) logit model that incorporates important observed and unobserved heterogeneity in firms' location choices. We obtain estimates of the full set of location specific tax elasticities and conduct ex ante analysis of how the location of ownership of intellectual property will respond to changes in tax policy. We find that recent reforms that give preferential tax treatment to income arising from patents are likely to have significant effects on the location of ownership of new intellectual property, and could lead to substantial reductions in tax revenue.

The literature has emphasised the downward pressure on corporate income tax rates that arises from factor mobility. There is also a large literature that discusses the strategies firms use to shift income for tax purposes and to circumvent anti-avoidance rules, and that highlights an important role for intangible assets. However, we know relatively little about the extent to which the location of intangible assets responds to tax. The evidence there is on the impact of tax on the location of capital more generally has tended to suffer from the imposition of restrictive a priori assumptions placed on the underlying model of firm behaviour. From a policy perspective it is clearly important to understand how responsive firms are to corporate income taxes when they make location decisions. In this paper, we estimate a model of firms' decisions over where to locate the legal ownership of their patents. We find that corporate tax rates are an important determinant of location choice. We extend the current literature on the determinants of firm location choice by estimating a flexible choice model, which accounts for both observed and unobserved heterogeneity in behaviour. We are able to generate own and cross tax elasticities across locations that capture complex patterns of substitution in the data. The model can be used to conduct ex ante analysis of policy changes. We find that this heterogeneity is important for explaining location choices. Our model also shows that other factors influence where firms choose to hold legal ownership of patents. For instance, firms are more likely to locate patent ownership in countries where they have associated real innovative activity. This may reflect co-location externalities, or the influence of tax rules which seek to limit the extent to which income and real innovative activity can be geographically separated. Firms also value other non-tax location characteristics. Such factors, along with tax rules like the operation of CFC regimes that limit the tax advantages of locating patent ownership in low tax jurisdictions, help explain why we do not see firms choosing to hold all legal ownership of patents in the lowest tax locations. We use the model to consider the impact of the recent introduction of preferential tax regimes for income from patents. These Patent Boxes are likely to attract patent income, but our estimates suggest that they will also lead to substantial falls in tax revenues. Of course some of this revenue loss might be offset by gains from attracting activities that yielded positive externalities; these would need to be taken into account in a calculation of the welfare impact of the policy. It is also possible that the tax reforms will affect firms' decisions over whether to apply for a patent on a new technology or whether to rely on secrecy. We do not have information that would allow us to directly estimate this margin, but this would be an interesting avenue for future research. The introduction of Patent Boxes by several European countries in a relatively short space of time has given rise to concerns that countries are engaging in tax competition for patent income. In future work we intend to build on the framework developed here to consider whether governments are engaged in a strategic game to attract income from intellectual policy that ultimately will continue to exert downward pressure on corporate taxes.