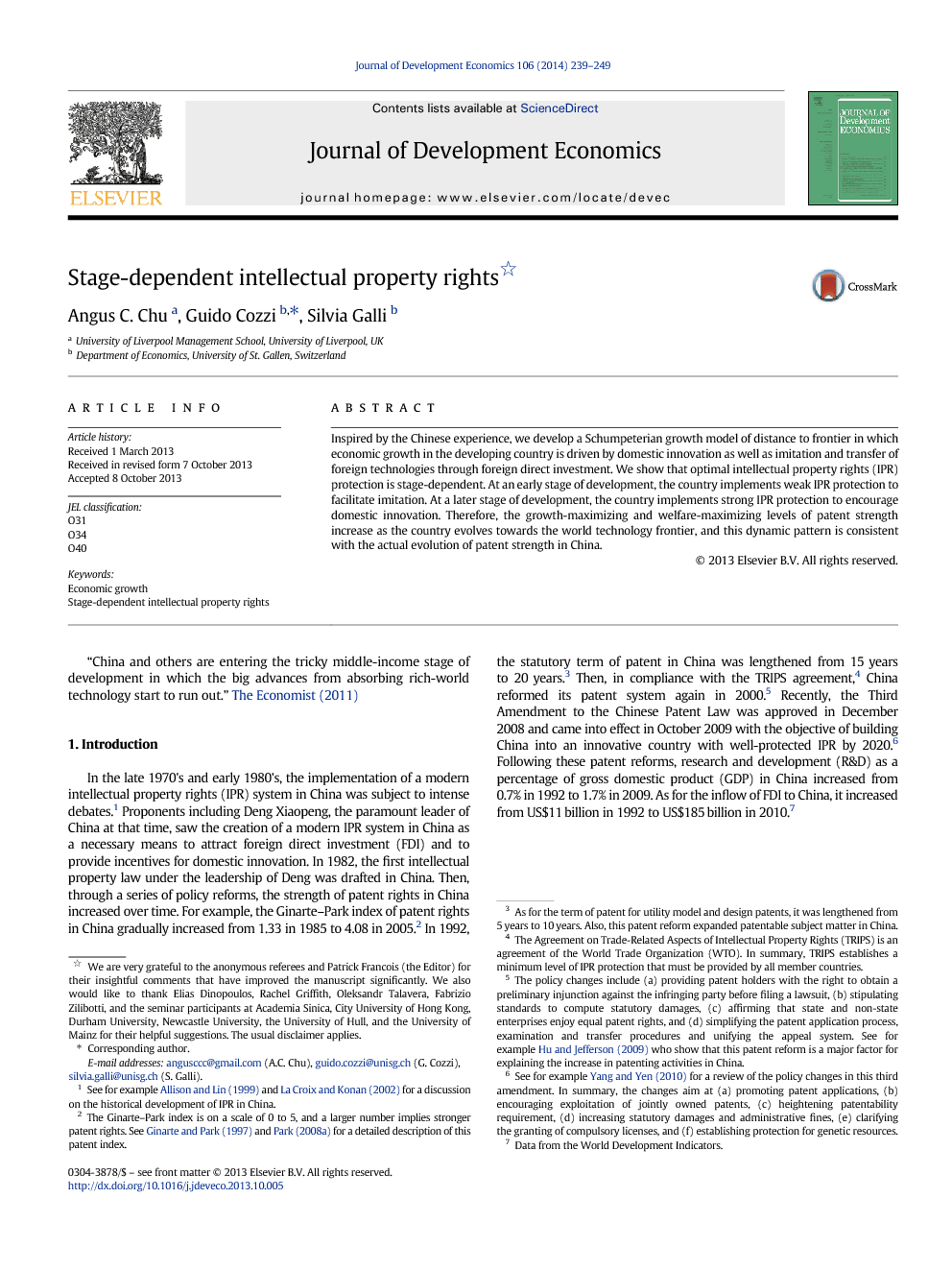 Inspired by the Chinese experience, we develop a Schumpeterian growth model of distance to frontier in which economic growth in the developing country is driven by domestic innovation as well as imitation and transfer of foreign technologies through foreign direct investment. We show that optimal intellectual property rights (IPR) protection is stage-dependent. At an early stage of development, the country implements weak IPR protection to facilitate imitation. At a later stage of development, the country implements strong IPR protection to encourage domestic innovation. Therefore, the growth-maximizing and welfare-maximizing levels of patent strength increase as the country evolves towards the world technology frontier, and this dynamic pattern is consistent with the actual evolution of patent strength in China.

In this study, we have developed a simple Schumpeterian growth model of distance to frontier to analyze the evolution of IPR protection in developing countries. Although our model is stylized, we believe that it captures the essence of the key issue that is the interrelation between economic development and optimal IPR protection. Specifically, an appropriate IPR system contributes to the economic development of a country, which in turn determines the optimal level of IPR protection in the country at a given stage of development. In summary, we find that the optimal strength of IPR protection increases as a developing country evolves towards the world technology frontier, and this theoretical finding of stage-dependent IPR protection is consistent with the actual evolution of the IPR system in China. In terms of policy implications, our finding suggests that it is optimal for a developing country to gradually strengthen its IPR protection. In other words, requiring a developing country, such as China, to immediately raise its level of patent protection on par with developed countries would hurt its social welfare. In other words, the Chinese government would probably have wanted to implement a less significant reform to the patent system if the TRIPS Agreement were not a requirement for the accession to the WTO. 52 In a National Academy of Sciences report, Merrill et al. (2004, p. 13) also argue that “patents exist in most countries, and the degree to which countries at different stages of economic development should adhere to the same standards of patentability, conform to the same rules, and follow the same administrative procedures is an enormously complex although extremely important set of issues. […] readers should not infer that what we recommend for the United States we believe less-developed countries should adopt.” Our finding of stage-dependant IPR policy reiterates their concern and provides a justification for the WTO's procedure that when the TRIPS Agreement was implemented in developed countries in 1996, developing countries and least developed countries were given an extension of 4 years and 11 years respectively to apply the agreement's provisions. Finally, in the theoretical model, we consider a developing country that takes the world technology frontier as given. Although it is arguable that technological progress in developed countries may be affected by the level of IPR protection in developing countries, it is still an open debate among existing studies (cited in the introduction) as to whether Southern IPR protection has a positive or negative effect on Northern innovation. Therefore, we leave this important but controversial issue to future research.