عنوان انگلیسی
The sun rises in the east of Africa : A comparison of the development and status of solar energy markets in Kenya and Tanzania
دانلود فوری مقاله + سفارش ترجمه 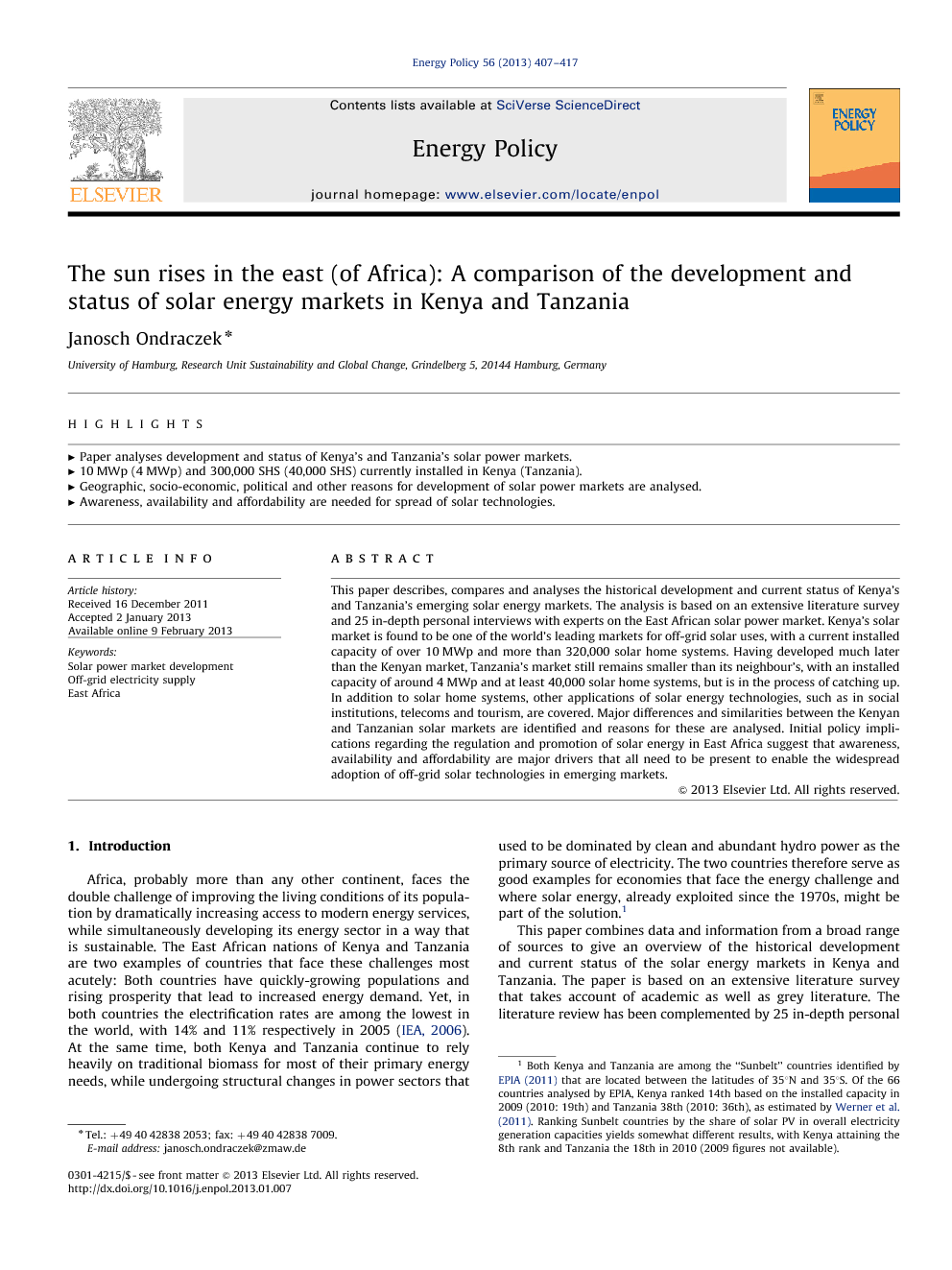 This paper describes, compares and analyses the historical development and current status of Kenya's and Tanzania's emerging solar energy markets. The analysis is based on an extensive literature survey and 25 in-depth personal interviews with experts on the East African solar power market. Kenya's solar market is found to be one of the world's leading markets for off-grid solar uses, with a current installed capacity of over 10 MWp and more than 320,000 solar home systems. Having developed much later than the Kenyan market, Tanzania’s market still remains smaller than its neighbour’s, with an installed capacity of around 4 MWp and at least 40,000 solar home systems, but is in the process of catching up. In addition to solar home systems, other applications of solar energy technologies, such as in social institutions, telecoms and tourism, are covered. Major differences and similarities between the Kenyan and Tanzanian solar markets are identified and reasons for these are analysed. Initial policy implications regarding the regulation and promotion of solar energy in East Africa suggest that awareness, availability and affordability are major drivers that all need to be present to enable the widespread adoption of off-grid solar technologies in emerging markets.

Africa, probably more than any other continent, faces the double challenge of improving the living conditions of its population by dramatically increasing access to modern energy services, while simultaneously developing its energy sector in a way that is sustainable. The East African nations of Kenya and Tanzania are two examples of countries that face these challenges most acutely: Both countries have quickly-growing populations and rising prosperity that lead to increased energy demand. Yet, in both countries the electrification rates are among the lowest in the world, with 14% and 11% respectively in 2005 (IEA, 2006). At the same time, both Kenya and Tanzania continue to rely heavily on traditional biomass for most of their primary energy needs, while undergoing structural changes in power sectors that used to be dominated by clean and abundant hydro power as the primary source of electricity. The two countries therefore serve as good examples for economies that face the energy challenge and where solar energy, already exploited since the 1970s, might be part of the solution.1 This paper combines data and information from a broad range of sources to give an overview of the historical development and current status of the solar energy markets in Kenya and Tanzania. The paper is based on an extensive literature survey that takes account of academic as well as grey literature. The literature review has been complemented by 25 in-depth personal interviews with leading experts on the East African solar energy market that were conducted in September 2010. The paper provides an overview that focuses on two of the biggest economies in the region, which are also two of its biggest markets for solar energy applications. Given the current market structure, the paper focuses on the market for off-grid solar photovoltaic (PV) systems, but also makes reference to other solar energy applications.2 In addition to presenting an up-to-date overview of the solar energy markets in both countries, this paper serves a second purpose by analysing and explaining the observed differences and similarities between Kenya’s and Tanzania’s solar markets. Both the up-to-date overview and the comparative analysis fill major gaps in current knowledge. The aim of this paper is therefore to contribute to the body of scientific literature on the diffusion of solar energy technologies and to provide academics, industry participants and policy-makers with a useful reference work that should facilitate the formulation of renewable energy policies in East Africa and beyond. The remainder of this paper is structured as follows: Sections 2 and 3 present a concise overview of the development and current status of solar energy markets in Kenya and Tanzania, respectively. Section 4 describes major similarities and differences between both markets. Section 5 puts forward and analyses a number of possible explanations for the observed differences between Kenya and Tanzania. Finally, Section 6 provides a short summary and concludes with some policy implications that emerge from the previous analysis.