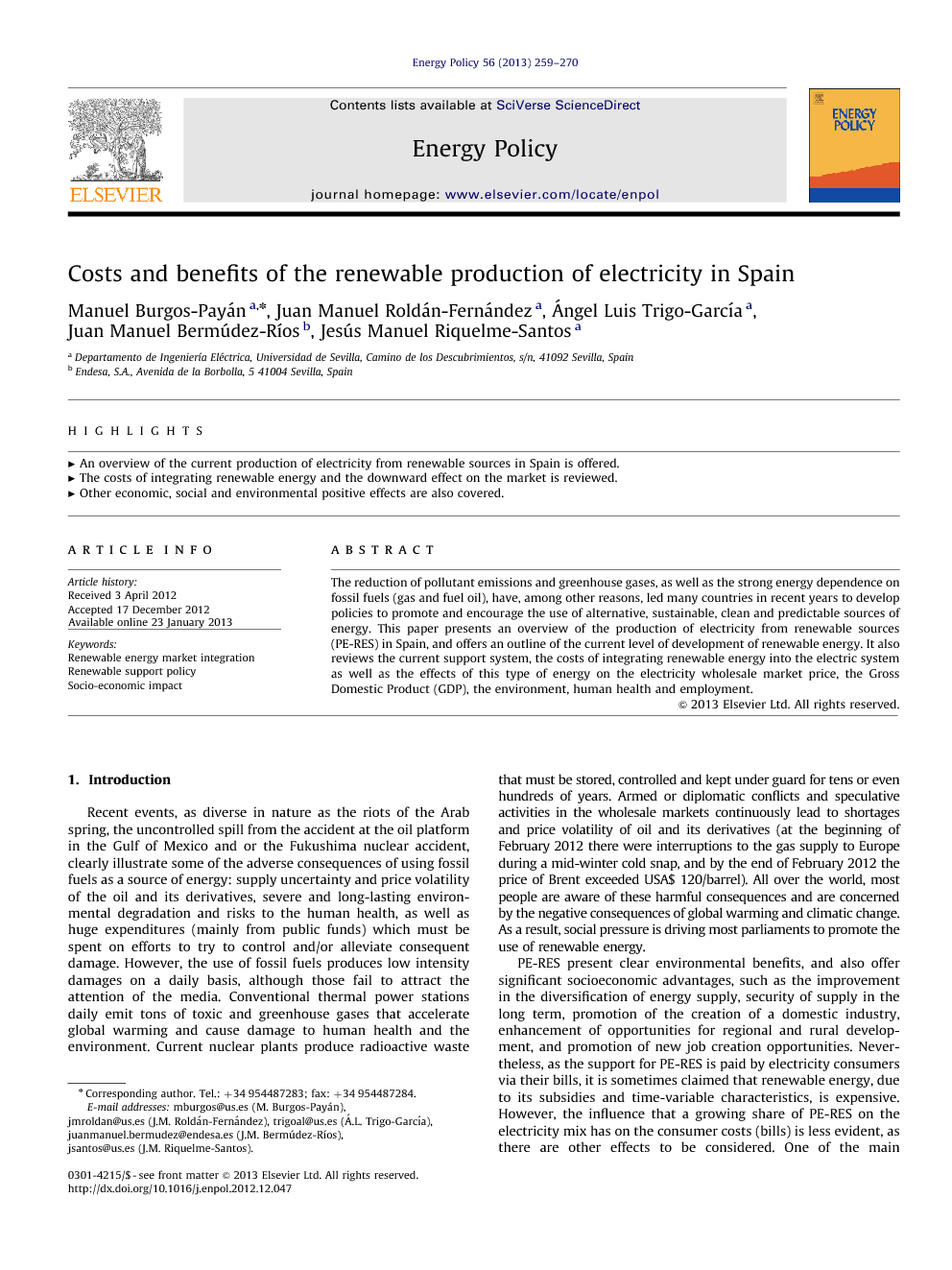 The reduction of pollutant emissions and greenhouse gases, as well as the strong energy dependence on fossil fuels (gas and fuel oil), have, among other reasons, led many countries in recent years to develop policies to promote and encourage the use of alternative, sustainable, clean and predictable sources of energy. This paper presents an overview of the production of electricity from renewable sources (PE-RES) in Spain, and offers an outline of the current level of development of renewable energy. It also reviews the current support system, the costs of integrating renewable energy into the electric system as well as the effects of this type of energy on the electricity wholesale market price, the Gross Domestic Product (GDP), the environment, human health and employment.

Recent events, as diverse in nature as the riots of the Arab spring, the uncontrolled spill from the accident at the oil platform in the Gulf of Mexico and or the Fukushima nuclear accident, clearly illustrate some of the adverse consequences of using fossil fuels as a source of energy: supply uncertainty and price volatility of the oil and its derivatives, severe and long-lasting environmental degradation and risks to the human health, as well as huge expenditures (mainly from public funds) which must be spent on efforts to try to control and/or alleviate consequent damage. However, the use of fossil fuels produces low intensity damages on a daily basis, although those fail to attract the attention of the media. Conventional thermal power stations daily emit tons of toxic and greenhouse gases that accelerate global warming and cause damage to human health and the environment. Current nuclear plants produce radioactive waste that must be stored, controlled and kept under guard for tens or even hundreds of years. Armed or diplomatic conflicts and speculative activities in the wholesale markets continuously lead to shortages and price volatility of oil and its derivatives (at the beginning of February 2012 there were interruptions to the gas supply to Europe during a mid-winter cold snap, and by the end of February 2012 the price of Brent exceeded USA$ 120/barrel). All over the world, most people are aware of these harmful consequences and are concerned by the negative consequences of global warming and climatic change. As a result, social pressure is driving most parliaments to promote the use of renewable energy. PE-RES present clear environmental benefits, and also offer significant socioeconomic advantages, such as the improvement in the diversification of energy supply, security of supply in the long term, promotion of the creation of a domestic industry, enhancement of opportunities for regional and rural development, and promotion of new job creation opportunities. Nevertheless, as the support for PE-RES is paid by electricity consumers via their bills, it is sometimes claimed that renewable energy, due to its subsidies and time-variable characteristics, is expensive. However, the influence that a growing share of PE-RES on the electricity mix has on the consumer costs (bills) is less evident, as there are other effects to be considered. One of the main repercussions is the downward pressure that the presence of PE-RES puts on the wholesale price of electricity. Jensen and Skytte (2003) were probably the first to point out that a greater share of PE-RES (wind power in their work) in the electricity mix could lead to a reduction in the wholesale price of electricity. Sensfuss et al. (2008) examined the case of wind-powered generation in Germany, and Saénz de Miera et al. (2008) the case of Spain. They found heuristically that more wind-powered generation integration results in a reduction of the electricity wholesale price. In both cases, the authors concluded that the cost of supporting PE-RES is roughly balanced by the downward impact on wholesale market prices. In addition, those authors took into account that PE-RES (wind) reduce the number of CO2 allowances needed by the electricity generation sector to cover their greenhouse emissions. This additional effect puts a net supplementary downward pressure on the wholesale electricity price. This paper discusses the case of the effects of the integration of PE-RES in Spain. The work empirically reviews Spanish PE-RES support schemes and the balance between the cost increase for the system and the reduction in wholesale prices, while including the effect of the cost of CO2 allowances needed to cover the greenhouse emissions, as given in Sensfuss et al. (2008) and Saénz de Miera et al. (2008). In this review, the approach is broader since the paper assesses the main renewable sources of energy (not only wind) and other economic and social aspects, such as the amount of toxic gas emissions and greenhouse gases avoided, the health costs avoided, the avoided fuel imports, the impact of the renewable sector on the Spanish GDP, and the potential for new job creation. The content of the paper is as follows. First the current situation of Spanish electricity production and the renewable promotion scheme is reviewed. The cost of integration of PE-RES into the electricity market and the downward effect on the wholesale electricity market are covered. Other positive economic and social effects such as the reduction of fuel imports, the effect on the environment, the health and job creation are also covered. The article closes with a summary of the main findings resulting from the review.

Although at the time of writing this paper the Spanish Government has enacted a temporary suspension of premiums for new renewable facilities (the previously existing facilities retain their established support system) and the renewable sector presents a lower growth rate due to the financial crisis, this empirical survey of the Spanish scheme of electricity production from renewable resources (Special Regime) has shown that the development of these technologies has a very favorable economic, social, and environmental impact and improves the control of dependence on foreign energy. The main conclusions of the survey can be summarized as follows: • The growing integration of renewable sources in the electricity market puts a clear downward pressure on the wholesale electricity price (although other causes could have contributed). During 2006–2011, the volume of renewable energy grew at a mean rate of 7.98 TWh/year, which resulted in a reduction of the wholesale price at a mean rate of 0.90 €/MWh. Therefore, on average, every terawatt-hour of renewable energy reduces the wholesale price by 0.11 €/MWh. • For the 2008–2011 period examined, the rough estimation of the cumulated reduction of the electricity market price for the customers slightly overcompensated the premium by 528 M€/year (3.3% of the mean yearly total cost). • According to APPA, the generation of electricity with renewable energy prevented the importation of more than 12.6 million tons of oil equivalent (TOE), in 2010. This represented a saving of fossil fuel imports of 2302 M€, approximately 0.22% of Spanish GDP for that year. • During 2010, renewable energy used for electricity production prevented the emission of 32.3 million tons (among other emissions) of greenhouse effect gases. In economic terms, the impact of prevented CO2 allowances alone amounted to 467.2 M€. • The replacement of fossil fuels with renewable energy results in lower emissions of SO2 and NOx, gases, which are harmful to human health. During 2010, this replacement has prevented the loss of 1.09 million days of human life (2.99 thousand years or 31.4 min per Spanish resident) and a saving of 160 M€ in health care savings. • In 2010, even after 2 years of reduced activity, the renewable energy industry still gave direct employment to 54,925 people in Spain. In the coming years, the share of renewable energy sources in the scheme of Spanish electricity generation will have an increasingly important role to play. This renders it advisable for the suspension of the moratorium of premiums applied to new renewable facilities, as well as for the removal of the existing regulatory and physical barriers, especially the increase in the interconnection capacity with Central Europe through France. In Spain as in other countries, especially those in the EU, there is a commitment to using renewable energy sources as a means to meet the international commitments on CO2 and on other reductions of the effects of greenhouse gases, as well as commitments on other economic and social objectives. The current and forecasted energy context makes it logical to continue and reinforce the ongoing replacement of fossil fuels, including nuclear fuel, with renewable energy sources. At present, renewable energy resources present the energy option that best combines the principles of sustainability: affordable cost, worldwide abundance, non-pollution for the environment, and security of supply. For the future, the expansion of offshore plants, the progressive integration of plug-in electric vehicles, the advance in the development of microgrids, and the growing exportation of the Spanish surplus of renewable electrical energy, would boost the creation of new areas of economic activity and job generation. All these new activities would increase the share of the renewable energy industry in Spanish and EU GDPs.