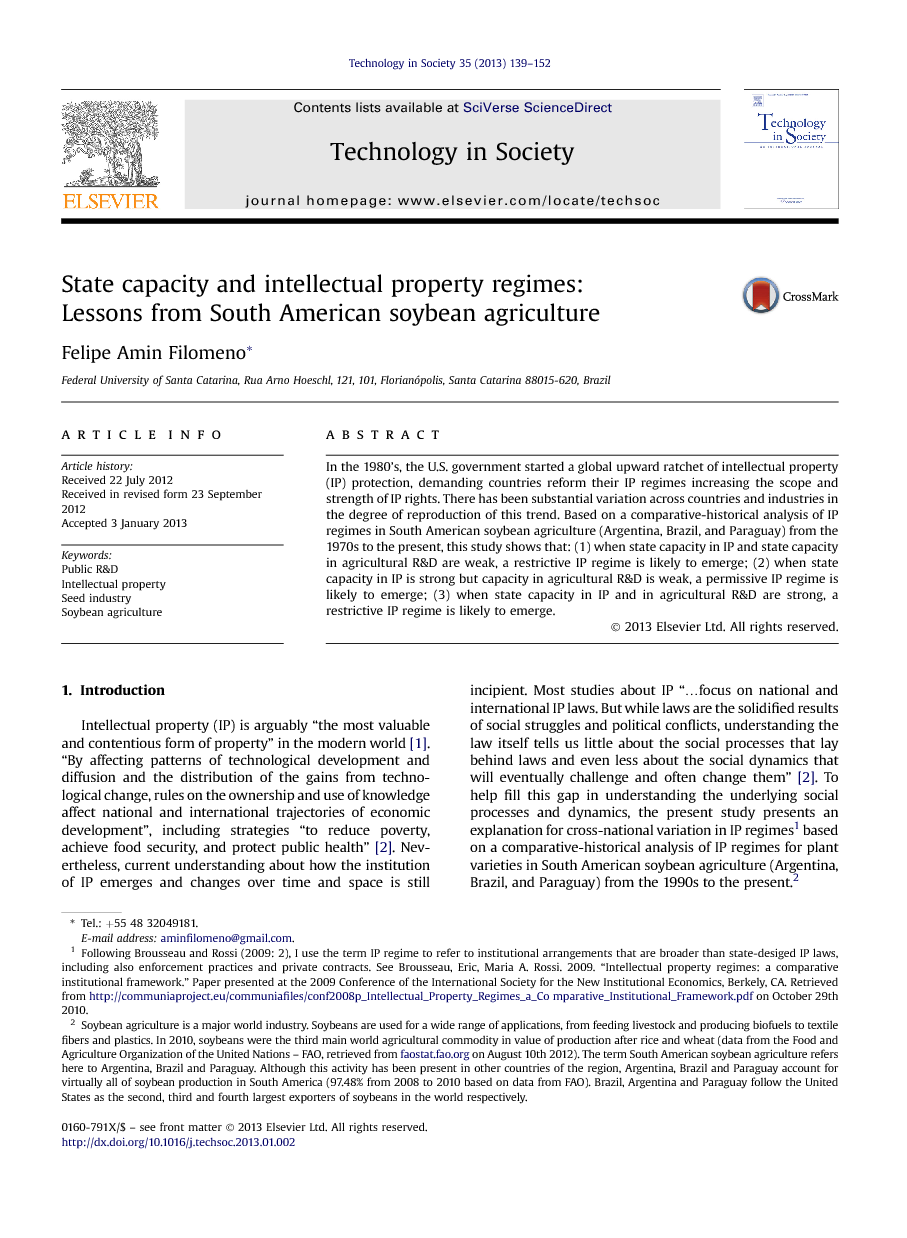 Intellectual property (IP) is arguably “the most valuable and contentious form of property” in the modern world [1]. “By affecting patterns of technological development and diffusion and the distribution of the gains from technological change, rules on the ownership and use of knowledge affect national and international trajectories of economic development”, including strategies “to reduce poverty, achieve food security, and protect public health” [2]. Nevertheless, current understanding about how the institution of IP emerges and changes over time and space is still incipient. Most studies about IP “…focus on national and international IP laws. But while laws are the solidified results of social struggles and political conflicts, understanding the law itself tells us little about the social processes that lay behind laws and even less about the social dynamics that will eventually challenge and often change them” [2]. To help fill this gap in understanding the underlying social processes and dynamics, the present study presents an explanation for cross-national variation in IP regimes1 based on a comparative-historical analysis of IP regimes for plant varieties in South American soybean agriculture (Argentina, Brazil, and Paraguay) from the 1990s to the present.2 South American soybean agriculture has been the site of intense conflicts between rural producers, seed companies, and states over IP rights on plant varieties. In the core of these disputes lies the right of rural producers to save seeds from plant varieties protected with IP rights from their own fields for future cultivation without consent from or payments to seed companies. As long as rural producers retain this right, they are not totally dependent on seed companies to obtain seeds.3 Therefore, seed companies have demanded from governments and rural producers from Argentina, Brazil and Paraguay restrictions on that right so that they can maximize the appropriation of economic returns from the agricultural biotechnology they develop. One of the main actors in these disputes is transnational corporation Monsanto, which holds patents on Roundup Ready (RR) soybeans, the most largely cultivated genetically modified plant variety in the world.4 Although IP rights on plant varieties affect other crops, “there is no doubt that the contestation over the right of rural producers to save seeds, with its consequences on legislative changes and demands for royalty payments, was born and intensified with the generalization of the use of transgenic varieties of soybeans” [3].5 The success of seed companies in restricting the right to save seeds has varied from country to country. In Argentina, the country has provided relatively weak protection for private IP rights on seeds since the creation of the “Law of Seeds and Phytogenic Creations” in1973.6 This law allows rural producers to save seeds without paying royalties. In addition, Monsanto was never able to obtain a patent on RR soybeans in Argentina. The company retaliated with a suspension of its research and marketing operations with soybeans in the country and law suits against Argentine soy growers and exporters in European countries, but none of this was effective in changing Argentina’s IP regime on seeds. In contrast, IP rules and enforcement practices in Brazil and Paraguay have strengthened private IP rights on plant varieties (including restrictions on the right to save seeds). In both countries, Monsanto implemented a private system of royalty collection for RR soybeans that virtually eliminated the right of soy growers to freely save seeds. This reality is puzzling in different ways. First, the case of Argentina defies the global increase in IP protection that emerged around 1980 [4]. Since then, states and corporations from core countries led by the U.S. government have demanded other states to ratify international treaties and reforms to national legislation increasing the scope and strength of IP rights. Their goal is to preserve the international competitiveness of the knowledge-intensive industries of the Global North. Second, the case of South American soybean agriculture challenges two theories from the literature on IP regimes. The first is that wealthier countries offer stronger protection to IP in comparison to poorer countries. However, Argentina has had levels of income per capita higher than those observed in Brazil and Paraguay, but its IP regime on seeds is relatively weak. The second theory concerns what I will refer to here as “state capacity in IP”, defined as the technical, organizational, and financial capacity of a state to design and enforce IP rules according to national development goals. This theory states that countries with stronger state IP capacity enforce IP rules according to their own goals. Brazil has been recognized as a leader among developing countries in its capacity to shape national and international IP rules according to its national development goals. However, its IP regime on seeds has changed in accordance with demands from foreign seed companies and in spite of protests from Brazilian rural producers. In the next section, I discuss these arguments and reformulate them to account for the puzzles of South American soybean agriculture, resulting in an alternative theory on state capacity in agricultural R&D and state capacity in IP. Section 3 contains a historical analysis to empirically ground my theory. It is divided into three sub-sections: (3.1) state capacity in agricultural R&D, (3.2) state capacity in IP, and (3.3) IP regimes on seeds. Each sub-section is further divided into segments focusing on each country. This research is based on data from interviews,7 official documents,8 newspaper articles,9 and academic literature. Finally, a concluding section summarizes the research findings from a comparative perspective and discusses their policy implications.

As summarized in Table 2, different combinations of state capacity in IP and state capacity in R&D are associated with different types of IP regimes. This typology is historically specific but it can serve as a starting point for analyses of IP regimes in other countries and industries. Table 2. State capacity in intellectual property and in R&D and intellectual property regimes in south American soybean agriculture (1990–2010). Country State capacity in IP State capacity in agricultural R&D IP regime Argentina Strong Moderate/weak Permissive Brazil Strong Strong Restrictive Paraguay Weak Weak Restrictive Table options This typology can be further elaborated using the concepts of old and neodevelopmental IP regimes introduced by Shadlen (2011). According to this author, the emphasis on innovation [in developing countries] inspires the emergence of “neodevelopmental” patent regimes. Whereas traditionally, “developmental” patent regimes aimed to facilitate local actors’ access to and use of knowledge by restricting – and at times prohibiting – patents in certain technological areas, neodevelopmental regimes supplement the focus on knowledge use with an emphasis on knowledge generation [85]. Neodevelopmental IP regimes combine measures to ameliorate the effects that strong patent protection can have on knowledge-users with incentives to innovative activities and patent seeking, especially in incremental innovations that are feasible given the technological capacity in developing countries [85]. Innovation policy generates new technological capacity that can make local actors more inclined to stronger protection for IP rights. This can reshape social coalitions that sustain a country’s IP regime and lead to changes that make it more restrictive of access to knowledge [85]. Brazil exemplifies a neodevelopmental IP regime on plant varieties, which partially results from the increasing technological capacities (and interests in IP protection) of its state-owned agricultural R&D corporation. In contrast, Argentina is an example of an old developmental IP regime on plant varieties. The state has intermediary capacities in agricultural R&D and a particularly weak presence in the soybean seed market. Thus, it has responded to the demands of local knowledge-users by allowing easy access to foreign technology through weak IP rights, relying on its strong capacity in IP to do so. If the Argentine state keeps increasing the support to INTA as it has done in recent years, Argentina might follow a neodevelopmental path. A stronger INTA might develop a clearer interest in IP protection and become a reliable source of seed technology for Argentine soy growers, taming their resistance against stronger IP. To account for the type of IP regime exemplified by Paraguay, I propose the concept of dependent IP regimes, which refers to countries where technological capacity is low and state capacity is insufficient to counter foreign demands for IP protection and allow cheap access to foreign technology. My typology and its theoretical contribution to understanding IP regimes also have policy implications. If an IP regime is to promote development, it should not only facilitate access to foreign-owned technology by local knowledge-users but also enable them to become knowledge-producers. The old developmental Argentinean IP regime, being too focused on cheapening access to foreign technology, is not as capable of promoting national technological development as the Brazilian neodevelopmental regime is. This points out to the need of expanding public R&D on plant varieties. Although in Brazil this has been related to restrictions on the right of rural producers to save seeds, a stronger role of the state in the provision of plant technology is not incompatible with assuring that at least small rural producers retain that right as a way to tame the power of private corporations and for matters of agro-ecology (to prevent genetic erosion). Because not every developing country can afford having a corporation like EMBRAPA, cooperation between public agricultural R&D agencies from developing countries may prove a very strategic venture. In any case, rural producers, small or big, should not abdicate the right to save seeds unless some sort of compensation is legally assured in terms of local technological capacity building. Finally, it is important to note that all three IP regimes identified in South American soybean agriculture face a serious limitation. When the IP regimes of Argentina and Brazil are characterized as developmental, this is based on a notion of development conceived of as a process of economic catching-up between peripheral and core regions of the world-system. However, under a broader conceptualization of development, those regimes might not actually be developmental. They are part of the institutional framework of an industry that, from the point of view of NGOs and rural social movements, is substantially irrational given its adverse social and environmental effects.