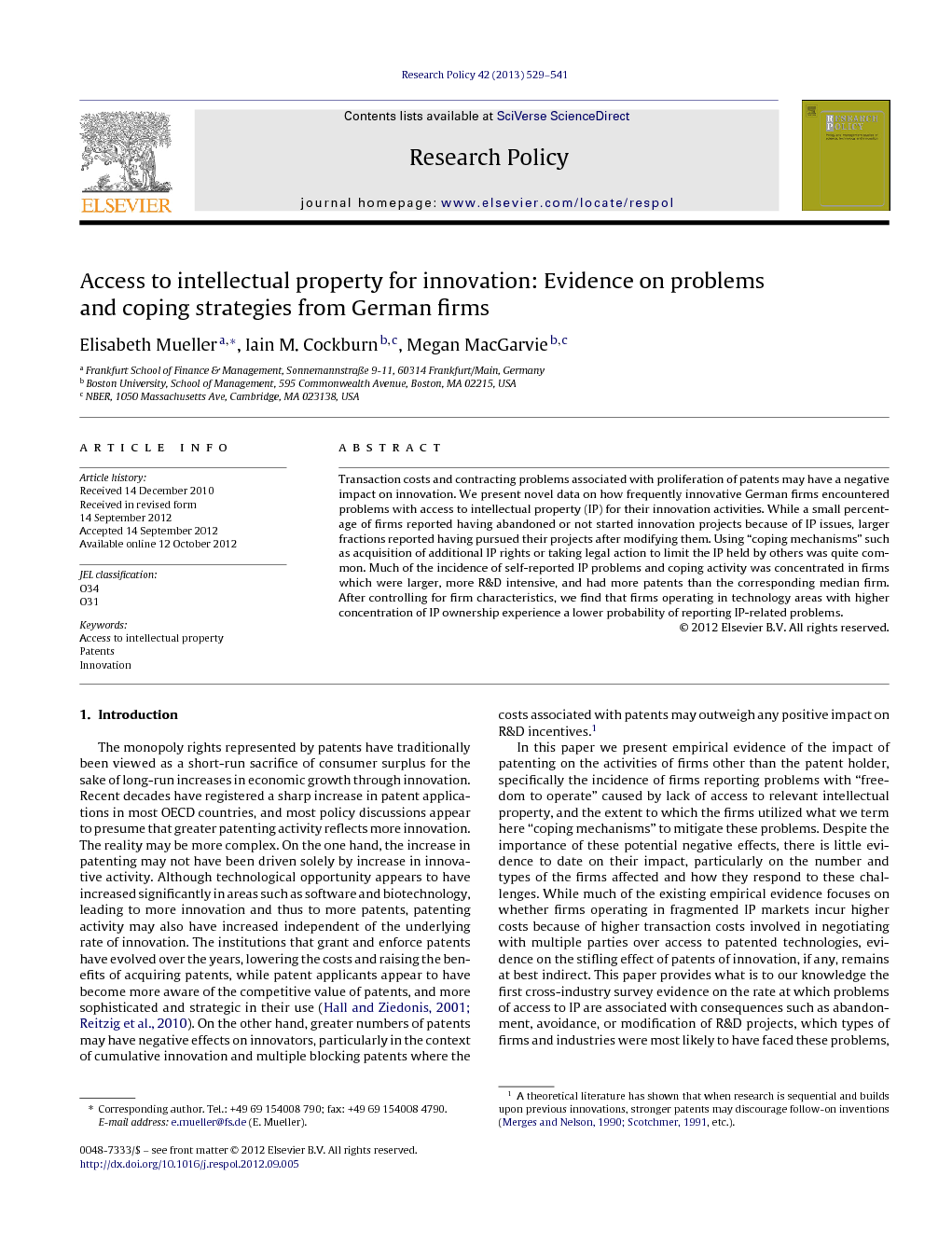 Transaction costs and contracting problems associated with proliferation of patents may have a negative impact on innovation. We present novel data on how frequently innovative German firms encountered problems with access to intellectual property (IP) for their innovation activities. While a small percentage of firms reported having abandoned or not started innovation projects because of IP issues, larger fractions reported having pursued their projects after modifying them. Using “coping mechanisms” such as acquisition of additional IP rights or taking legal action to limit the IP held by others was quite common. Much of the incidence of self-reported IP problems and coping activity was concentrated in firms which were larger, more R&D intensive, and had more patents than the corresponding median firm. After controlling for firm characteristics, we find that firms operating in technology areas with higher concentration of IP ownership experience a lower probability of reporting IP-related problems.

The monopoly rights represented by patents have traditionally been viewed as a short-run sacrifice of consumer surplus for the sake of long-run increases in economic growth through innovation. Recent decades have registered a sharp increase in patent applications in most OECD countries, and most policy discussions appear to presume that greater patenting activity reflects more innovation. The reality may be more complex. On the one hand, the increase in patenting may not have been driven solely by increase in innovative activity. Although technological opportunity appears to have increased significantly in areas such as software and biotechnology, leading to more innovation and thus to more patents, patenting activity may also have increased independent of the underlying rate of innovation. The institutions that grant and enforce patents have evolved over the years, lowering the costs and raising the benefits of acquiring patents, while patent applicants appear to have become more aware of the competitive value of patents, and more sophisticated and strategic in their use (Hall and Ziedonis, 2001 and Reitzig et al., 2010). On the other hand, greater numbers of patents may have negative effects on innovators, particularly in the context of cumulative innovation and multiple blocking patents where the costs associated with patents may outweigh any positive impact on R&D incentives.1 In this paper we present empirical evidence of the impact of patenting on the activities of firms other than the patent holder, specifically the incidence of firms reporting problems with “freedom to operate” caused by lack of access to relevant intellectual property, and the extent to which the firms utilized what we term here “coping mechanisms” to mitigate these problems. Despite the importance of these potential negative effects, there is little evidence to date on their impact, particularly on the number and types of the firms affected and how they respond to these challenges. While much of the existing empirical evidence focuses on whether firms operating in fragmented IP markets incur higher costs because of higher transaction costs involved in negotiating with multiple parties over access to patented technologies, evidence on the stifling effect of patents of innovation, if any, remains at best indirect. This paper provides what is to our knowledge the first cross-industry survey evidence on the rate at which problems of access to IP are associated with consequences such as abandonment, avoidance, or modification of R&D projects, which types of firms and industries were most likely to have faced these problems, and the degree to which they could mitigate the negative effects by participating in the market for intellectual property. The data presented here on these phenomena come from the 2008 wave of the Mannheim Innovation Panel (MIP), a survey in which the respondents themselves reported the occurrence of various events in connection with the right to use intellectual property rights. These events included problems such as not starting, abandoning, modifying innovation projects because their firms did not have the rights to the relevant IP, or taking the risky course of proceeding without access to that IP. They also included coping strategies that can be viewed as attempts to deal with the problems of access to IP, such as exchanging or acquiring IP, or attempting to limit competitors’ IP by participating in patent opposition proceedings, or engaging in negotiations with patent holders to avoid legal disputes.2 We examine variation in these responses across different types of firms and different industrial sectors, and across markets and technologies where we are able to measure the degree of concentration of ownership of IP in the market for patents. The results of present analysis can be described in terms of three main findings. First, it is rather rare for the median firm to stop projects or avoid them because of access to IP. Instead, many firms were engaged in such activities as acquiring additional IP rights or taking legal action to deal with or avoid problems of access to IP. Second, the incidence of self-reported IP problems and coping activity was confined mostly to firms which were larger, more R&D intensive, and had more patents than the median firm. While the larger firms had greater resources and capabilities than smaller or less experienced competitors to deploy coping mechanisms, they also experienced IP access problems more frequently. Overall, being a large, innovative firm does not per se appear to ensure protection against problems due to IP. Finally, after controlling for firm characteristics, we find that firms operating in technology areas with higher concentration of IP ownership experienced a lower probability of being confronted with problems. This finding, which is consistent with prior literature, may reflect a lower probability that negotiations break down when there are a smaller number of potential litigants.3

We examined the evidence collected from a survey of innovative German firms that responded to the queries relating to problems of accessing IP required for innovation. It was found that only a small percentage of firms abandoned or did not start innovation projects because of lack of access to IP. Acquiring IP or modifying innovation projects to comply with existing IP or proceeding without access to requisite IP was found to be common among the firms. Larger and more R&D-intensive firms were more likely to have used mechanisms to deal with problems of access to IP. An increase in the size of a firm's patent portfolio relative to other patents in a technology area, all else being equal, facilitated the use of solutions like negotiation or exchange of IP, but could not prevent the incidence of problems. This suggests the possibility that concentration in the market for intellectual property has a rather different effect than that of concentration in the product market. The available evidence suggests that increasing concentration of holdings of relevant IP may actually enhance competition by reducing problems of access to IP. This finding suggests an intriguing nuance for competition policy that should be better understood. Thus, the overall picture that emerges from this analysis is one in which firms rarely stopped projects or avoided them because of lack of access to IP. Rather, many firms were engaged in activities designed to deal with or avoid such problems. This raises the question of the opportunity costs of using these mechanisms and how they could be reduced. All else being equal, using coping mechanisms diverts resources that could otherwise be utilized for innovation activities by firms; policymakers must, therefore, promote innovation by finding ways to improve the efficiency of the institutions that facilitate access to IP. For example, centralization of national courts for patent litigation into a single European court could save legal expenses for European firms. The development of a standardized contract to license technology by public research institutions could reduce transaction costs and act as a blueprint for licensing between private partners as well. Furthermore, additional applications of recent advances in search technology could reduce the costs of prior art searches and make prior art easier to find.19 These results highlight the need for a better understanding of the private and social costs of coping with or adapting to an increasingly complex IP environment. Given the nature of the survey data reported here, it is clear that little is known about the nature and value of the projects that were abandoned or not started in the face of IP access problems, neither do we know the costs of accommodating or avoiding these problems. When a product was modified, was the modification radical or minor? Was the cost of acquiring requisite IP offset by the increase in revenues associated with the innovative project? Were the legal costs associated with the negotiations conducted to avoid problems of access to IP large or small? Without adequate information on the magnitude of the private and social costs imposed by IP access problems, it is difficult to draw definitive policy conclusions. The present findings suggest that the attention of researchers and policymakers could be usefully directed towards improving our understanding of the economic burden of IP.