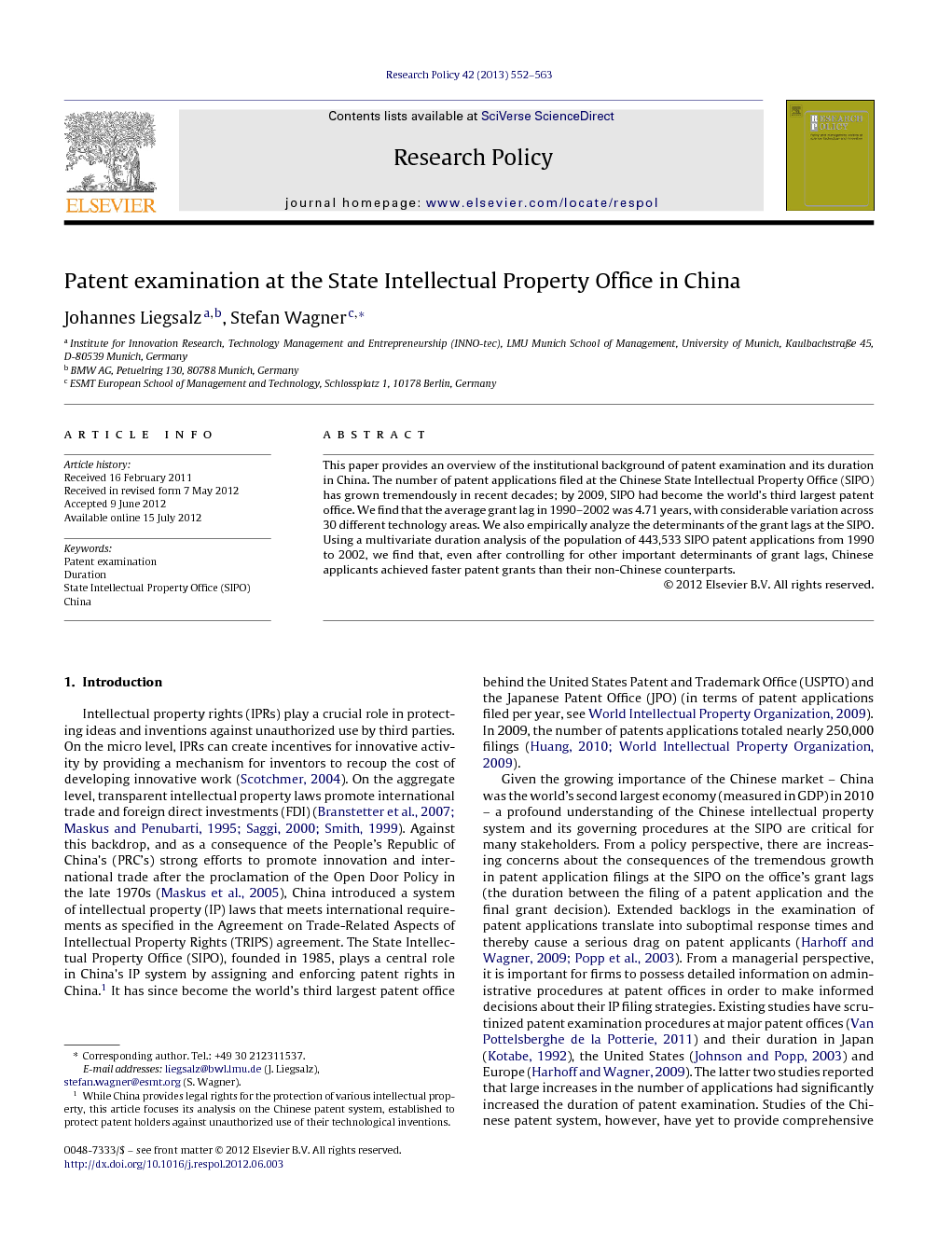 This paper provides an overview of the institutional background of patent examination and its duration in China. The number of patent applications filed at the Chinese State Intellectual Property Office (SIPO) has grown tremendously in recent decades; by 2009, SIPO had become the world's third largest patent office. We find that the average grant lag in 1990–2002 was 4.71 years, with considerable variation across 30 different technology areas. We also empirically analyze the determinants of the grant lags at the SIPO. Using a multivariate duration analysis of the population of 443,533 SIPO patent applications from 1990 to 2002, we find that, even after controlling for other important determinants of grant lags, Chinese applicants achieved faster patent grants than their non-Chinese counterparts.

Intellectual property rights (IPRs) play a crucial role in protecting ideas and inventions against unauthorized use by third parties. On the micro level, IPRs can create incentives for innovative activity by providing a mechanism for inventors to recoup the cost of developing innovative work (Scotchmer, 2004). On the aggregate level, transparent intellectual property laws promote international trade and foreign direct investments (FDI) (Branstetter et al., 2007, Maskus and Penubarti, 1995, Saggi, 2000 and Smith, 1999). Against this backdrop, and as a consequence of the People's Republic of China's (PRC's) strong efforts to promote innovation and international trade after the proclamation of the Open Door Policy in the late 1970s (Maskus et al., 2005), China introduced a system of intellectual property (IP) laws that meets international requirements as specified in the Agreement on Trade-Related Aspects of Intellectual Property Rights (TRIPS) agreement. The State Intellectual Property Office (SIPO), founded in 1985, plays a central role in China's IP system by assigning and enforcing patent rights in China.1 It has since become the world's third largest patent office behind the United States Patent and Trademark Office (USPTO) and the Japanese Patent Office (JPO) (in terms of patent applications filed per year, see World Intellectual Property Organization, 2009). In 2009, the number of patents applications totaled nearly 250,000 filings (Huang, 2010 and WIPO, 2009). Given the growing importance of the Chinese market – China was the world's second largest economy (measured in GDP) in 2010 – a profound understanding of the Chinese intellectual property system and its governing procedures at the SIPO are critical for many stakeholders. From a policy perspective, there are increasing concerns about the consequences of the tremendous growth in patent application filings at the SIPO on the office's grant lags (the duration between the filing of a patent application and the final grant decision). Extended backlogs in the examination of patent applications translate into suboptimal response times and thereby cause a serious drag on patent applicants (Harhoff and Wagner, 2009 and Popp et al., 2003). From a managerial perspective, it is important for firms to possess detailed information on administrative procedures at patent offices in order to make informed decisions about their IP filing strategies. Existing studies have scrutinized patent examination procedures at major patent offices (Van Pottelsberghe de la Potterie, 2011) and their duration in Japan (Kotabe, 1992), the United States (Johnson and Popp, 2003) and Europe (Harhoff and Wagner, 2009). The latter two studies reported that large increases in the number of applications had significantly increased the duration of patent examination. Studies of the Chinese patent system, however, have yet to provide comprehensive information about the consequences of rising applications on the SIPO's response time.2 This paper provides detailed information about SIPO patent examination procedures that will be important for policy makers and for managers responsible for corporate IP strategy. We will first present the institutional background and the legislation governing patent examination at the SIPO. Then we will provide empirical evidence of SIPO's application volumes and grant lags based on a comprehensive dataset on all patent applications filed with the office between 1990 and 2002. We show that SIPO's average grant lag in the period was 4.71 years, which is comparable to grant lags at the EPO but significantly longer than lags at the USPTO.3 We also scrutinize the determinants of the duration of patent examination at the SIPO employing multivariate duration models. Our results suggest that, while the examination process at the SIPO follows a routine similar to those of other major patent offices, there are several major differences unique to the SIPO. As in other jurisdictions, we find significant variation in examination times across applicant characteristics, as well as across technology fields. More interestingly, we show that Chinese applicants achieved faster patent grants than their counterparts from other Asian and non-Asian countries. While this effect might be a consequence of language advantages, we also show that Chinese applicants achieved disproportionally faster patent grants in areas of high technological relevance for the PRC, raising the question of favorable treatment for domestic applicants. The remainder of the paper is structured as follows: in Section 2, we provide an overview of the institutional background covering both the legislative regulations and the administrative procedures at the SIPO. Section 3 discusses why process durations, along with their potential determinants, are important for policy makers and patent applicants. Section 4 begins our empirical analysis with a short overview of our data sources and the definitions of our variables. In Section 5, we introduce the multivariate framework and provide results from our analysis. Section 6 concludes with a summary and potential avenues for further research.

The People's Republic of China has experienced rapid economic development in recent decades. Along with its fast economic growth, China established a transparent system of IP laws and joined related international treaties such as TRIPS and PCT. Patent applicants from around the world seek patent protection in China and, as a consequence, the number of patent applications at the SIPO has risen tremendously. This article presented a short overview of the most important features of the regulations governing the process of patent filing and examination in China. We have shown that those procedures largely resemble international standards and do not create structural barriers for international applicants. Our analysis of the population of SIPO patent applications filed from 1990 to 2002 revealed interesting insights about factors that affected the duration of patent examination for applications that were ultimately granted. Most interestingly, we show that Chinese applicants achieved faster patent grants when compared to applicants from other countries and to non-Asian applicants in particular. While this effect might be due to a greater familiarity of domestic applicants with the Chinese patent system, it might also be a sign of discrimination in favor of Chinese applicants. Since we are unable to ultimately determine if discrimination took place (and might be continuing), further research is warranted. This is particularly important because, according to TRIPS’ Article 3 (National Treatment) and Article 4 (Most-Favored-Nation Treatment), as well as to Article 18 of China's own patent law, applications from foreign and domestic applicants receive equal treatment. Our findings are also relevant for practitioners and managers responsible for IP filing strategies. We have provided the first comprehensive descriptive statistics for patent grant delays in China, based on the population of all patent filings from more than a decade of SIPO's operation. IP managers can use these details to plan their filing strategies, taking into account average pendency rates. We have also presented more fine-grained information about the determinants of the grant delays. For instance, we quantify the time advantage enjoyed by applicants who are more experienced in dealing with the SIPO. Also, applicants with a clear focus on the Chinese market, as well as by applicants filing a high number of SIPO applications, had their patents examined and granted in less time. Taken together, these findings imply that having experience in dealing with the SIPO can significantly reduce grant lags. Those firms with little or no experience dealing with Chinese patent authorities might find it advantageous to contract with a law firm experienced in dealing with the SIPO.