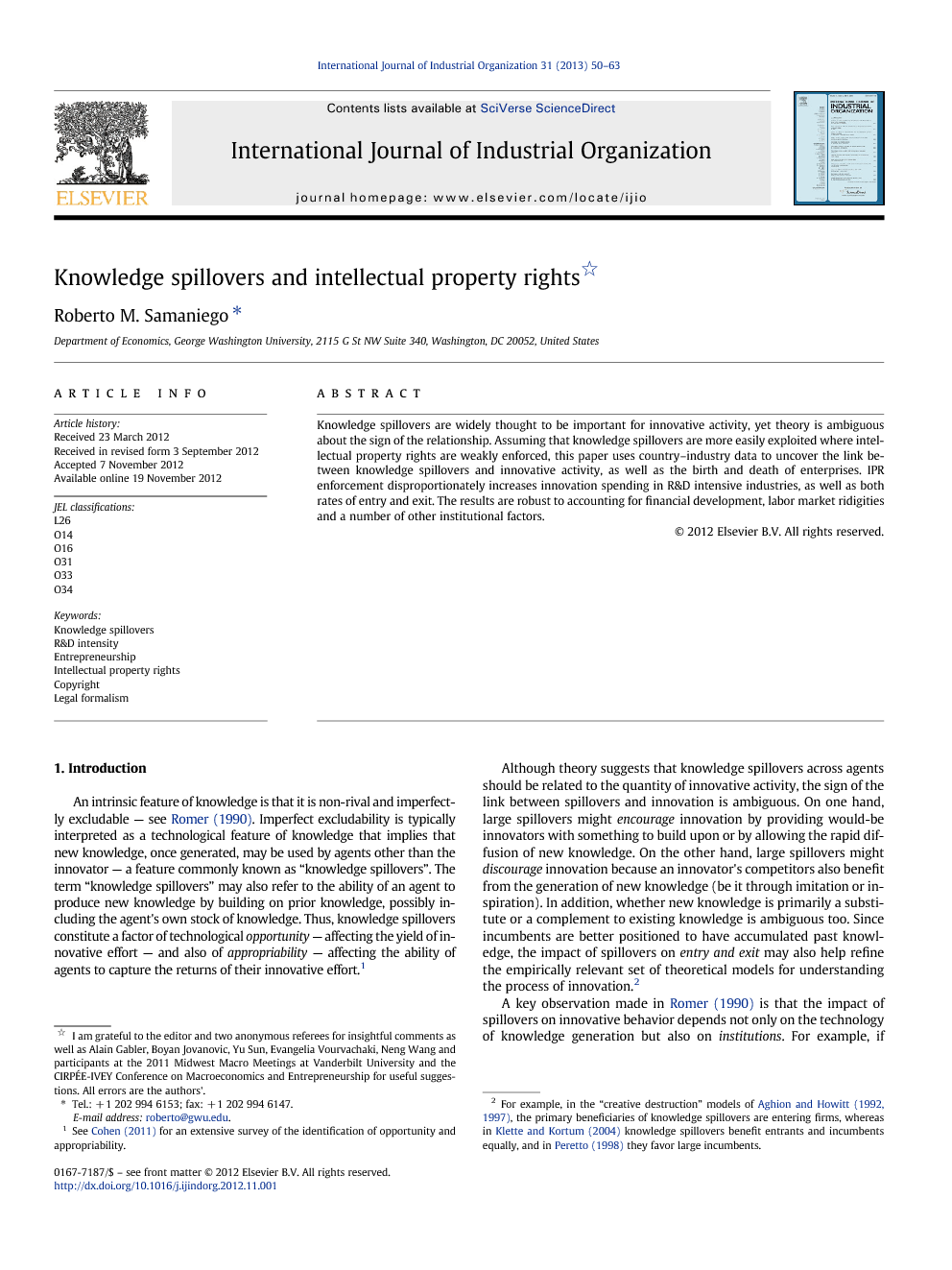 Knowledge spillovers are widely thought to be important for innovative activity, yet theory is ambiguous about the sign of the relationship. Assuming that knowledge spillovers are more easily exploited where intellectual property rights are weakly enforced, this paper uses country–industry data to uncover the link between knowledge spillovers and innovative activity, as well as the birth and death of enterprises. IPR enforcement disproportionately increases innovation spending in R&D intensive industries, as well as both rates of entry and exit. The results are robust to accounting for financial development, labor market ridigities and a number of other institutional factors.

This paper takes a simple yet novel approach to identifying the relationship between knowledge spillovers, innovation and entrepreneurship, exploiting cross-country differences in the institutions that limit the use of knowledge spillovers for imitation. The results indicate that strong IPR enforcement is associated with disproportionately greater innovation spending, entry and exit in industries that have higher “desired” R&D intensity (the R&D intensity displayed when IPR protection is strong). This suggests that, as long as intellectual property can be controlled by the innovator, larger knowledge spillovers are associated with more innovation, and with innovative entry.26 Most importantly, they suggest that new knowledge is often a substitute (not a complement) to some aspect of prior knowledge, so that in a relative sense entrepreneurs benefit more from larger knowledge spillovers than incumbents.27 It is also important that patent protection does not seem to play much of a role: intellectual property is much broader than just patentable knowledge, so broader measures of IPR enforcement (copyright protection and non-formalism in the legal system) turn out to be the institutional variables that matter, which protect (or proxy for the protection of) IP in the form of texts, software, brands, designs, etc. as well as scientific or engineering knowledge. In future work, it could be interesting to see whether the source of knowledge spillovers matters for any of these results. For example, most knowledge spillovers are known to be among firms in the same industry, which is why we do not distinguish between “source” and “benefit” industries: however, patent citation or other data might allow a more careful identification of the importance of different sources of knowledge spillovers for the generation of new knowledge — see Cai and Li (2012) for work in this direction. Also, as mentioned, whether trade linkages interact with IPRs could be assessed using more disaggregated data on trade flows and benchmark R&D. It would be interesting to expand the sample to see whether any additional factors play a role in innovative and entrepreneurial behavior in developing economies. Finally, the results have policy implications, not least that weak IPRs and weak court systems may constitute a drag not only on innovation but also on entrepreneurship. Also, the findings that cross-firm spillovers matter and that they favor entrants, imply that the externalities typically identified in creative destruction models are present — the externality from the business-stealing effect and the externality from the fact that an innovator may inspire other innovators (or may suffer from imitation). Djankov et al. (2002) find that barriers to entry are strongly related to GDP per person, whereas traditional steady-state general equilibrium models for policy evaluation cannot account for such large effects (see Moscoso Boedo and Mukoyama, 2012). The results suggest this may be because, by reducing entrepreneurship, barriers to entry stifle an important channel of innovation, so that an endogenous growth framework may be more suited for policy analysis of this kind.